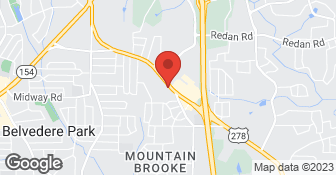 Dekalb Roofing Company is a residential specialist. We provide free estimates for roof and gutter replacement, as well as architectural shingles and gutter covers. We are family owned and have provided guaranteed service from the same location since 1973, serving the metro Atlanta area. We are licensed and insured, and provide written warranties on all services we provide. Also, we offer a 5-year warranty on labor so that our customers are completely satisfied and happy. Ask about our financing options!...

DeKalb Roofing Company put a new roof on my house about 20 years ago. About 5 years ago, due to not finding DeKalb's estimate in my junk folder and needing a roof replacement right away, I hired a roofer from Marietta. They broke my driveway which cost me $4,000 in addition to the roof and my gutters poured rainwater through my window, which cost more to fix. Yesterday I found a small water stain on my ceiling yesterday and called DeKalb Roofing, knowing that whatever the problem was they would find it and fix it at a fair price. Today Jeff Berry, a co-owner of the company with his brother founded by their father in 1972, came out personally to inspect the damage. He found a nail that had risen due to expansion of the roof during summers, drove it back down and sealed it. I offered to pay for his trip but he declined, and said to call him if I found another leak or any other problem. Enough said? If you need roofing...call DEKALB ROOFING COMPANY!!!

Everything went very smoothly. The office responded promptly to my request for an estimate, and willingly answered questions and made adjustments until I signed the proposal. The crew that did the work was meticulous in every detail, finishing the job on time and cleaning up very carefully afterward. I received the invoice the next day, and there were no surprises: though they needed to replace the wood decking of the roof, that contingency had been set out clearly in the proposal, so the additional cost was well within expectations. When it comes time to replace my gutters, I will contact DeKalb Roofing first.

I called to request a roof estimate. Lady cuts me off while speaking and tells me she wont be able to do it without hearing exactly what I needed. I explained it was covered by insurance and another company has done 90% of the work. Then she abruptly cuts me off and says they can only do the full roof. Had she listened to me, she would have heard the complete story that they messed up the entire job and I still will need a full roof replacement. So rude! They just lost potential business for a full roof replacement.

They left a message- turning down offer for estimate " roof is too steep" what??? I thought you're a roofing company- it's a residential home- NOTHING FANCY. Pathetic at best

This company does " just total installations." I was not able to use them.

Description of Work
I needed a soffit and gutter replaced or repaired.

Quick response; Left samples at the house; immediately scheduled a date within a couple of weeks; completed job within 2 days; looked great! Called to check on me to see if I was satisfied. Offered to come out to check it for free once/year! I only found 1 nail in the driveway. : )

Fantastic. I couldn't be happier with the service (and price) from Dekalb Roofing - and that's something you don't often hear about roofers! Robert was super fast on the inspection and quote, coming out within 2 days of my call. Two days later a full crew showed up and worked steadily for a very full day and a couple of hours the next day to remove the existing roof, replace some rotted decking, remove old twirly vents, and install a lovely new roof with ridge vents. The clean up was superb. I found nothing left behind, not a piece of shingle, nothing. I would not hire any other company for roofing. They rock.

Excellent work, excellent customer service! They were prompt and completed the work quickly. The house looks fantastic and I now have gutters! Thank you so much for your quick and dependable service. Highly recommend!

The bums did not respond to my inquiry

They scheduled the work to start on Monday for a roof replacement, truck (I'll admit, a little scary old truck but was also kinda cool) arrived about 8am, work started, they were done in two days, fast work and it was done well. Price was in the mix with the other quotes but generally on the low side. They did a few gutter fixes without charging. Really a large roof and I think i found 1 single nail after they left. Well done.

Ecoview windows of west Atlanta offers premium and affordable replacement windows and doors to value-conscious and motivated home owners.we are experts you can trust with your home improvement and home efficiency needs. we specialize in combining superior qualityvinyl and fiberglass manufactured goods with world-class,dependable service. Our mission is to provide home-transforming products and services.  …

Five Star Gutters LLC is committed to providing the highest quality gutter service to Atlanta. We recently earned the 2020 Super Service Award. 100% Customer Satisfaction Guarantee. Fully Insured with General Liability, Auto and Worker's Comp. Five Star Gutters does not require a deposit on most jobs, we provide 100% of the material and labor necessary to complete your job.  …

This is a family owned business with more than 15 years of experience. We take pride in being one of the best gutter companies in Georgia. Easy and convenient payment options. 10% off your project if you mention you found us on Angie’s List. Satisfaction Guaranteed!  …

No License Required for Trade
Bonded
Insured
All statements concerning insurance, licenses, and bonds are informational only, and are self-reported. Since insurance, licenses and bonds can expire and can be cancelled, homeowners should always check such information for themselves.To find more licensing information for your state, visit our Find Licensing Requirements page.
General Information
Free Estimates
Yes
Eco-Friendly Accreditations
No
Payment Options
Check, Visa, MasterCard, American Express, Discover
Senior Discount
No
Warranties
Yes

DeKalb Roofing Company Inc is currently rated 4.9 overall out of 5.

No, DeKalb Roofing Company Inc does not offer eco-friendly accreditations.

No, DeKalb Roofing Company Inc does not offer a senior discount.