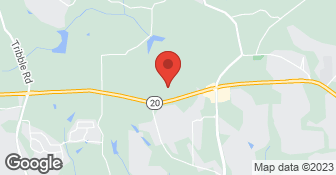 They lost me as a possible customer.

Description of Work
First I received an estimate for a new HVAC system, which I thought was very competitive. While I was researching the company on Angies list, I see there's a 10% senior citizens discount listed. I e-mailed them about the discount and I also asked if there was any discount for not financing. That evening, I'm e-mailed a new estimate with an $800 increase from the original estimate, without any mention of my question about any discount. Quite a sleezy way of doing business.

I have contract with them and when it's finished, I won't hire them again.

It turned out to be a pretty good experience. Responsiveness, I haven't had to call them but they came out immediately and the contract and installation was immediate as well. A little better, I'd say as far as the initial contact, better information of the differences between the units.

Description of Work
The last company I used was Reliance. I had them fix the AC system installed.

They come on time and they seem to know what they are doing in terms of maintenance. The only challenge I had with them was when they believed that I needed a new furnace for air conditioning and heating because the motherboard has gone out but I was able to get it repaired for $700 versus trying to buy a whole new unit for about $1000. They were trying to sell me a brand new unit.

Description of Work
I used Reliance Heating and Air Conditioning, Inc. for their services.

We really liked them. I would recommend them.

Description of Work
They did some repair work on our furnace.

They have said it works after they fixed it and then it didn't. They will be coming out today. As soon as our contract is up, we will be going with someone else.

Description of Work
They had to come about 7 times to fix things that they said they had already fixed. They are absolutely awful and because we have had such a problem, they gave us an extension on our warranty instead of a break in the price. They didn't hook up our air cleaners correctly. They crossed the wires on the heating. Different guys kept coming out and said that the last guy didn't do it right.

I have had an annual service contract with Reliance Heating & Air since I purchased my home in 2008. Late last summer I had a problem with my A/C unit on a weekend, was unable to reach anyone at Reliance, and called someone else to fix the unit. During that emergency it was brought to my attention that Reliance had been servicing the wrong outdoor unit all along. In other words, I had been paying a service contract only to have the inside portion of my unit serviced, and they were servicing someone else's unit outdoors. During the last maintenance call in November, I brought it to the attention of the tech (who is the same tech that has serviced my unit since 2008). The tech didn't believe that I was correct as to the location of my outdoor unit, and it was not until I made him walk to the other side of the building that he realized that I was correct. After realizing their mistake, I would have thought that they would have offered an apology, offered to give me a refund due to servicing the wrong unit for two years, or offered to provide the next year of service for free. Unfortunately, none of those things happened. They did not even offer an apology or acknowledgment of their mistake. Since my summer AC emergency turned out to be the replacement of a warranty part, I have to wonder if the $250.00 emergency service call I had to pay to another company was ultimately due to my outside unit never receiving proper service for over two years.

I have a yearly contract with them which includes a discount on any repairs that have to be made. They are very professional, know the equipments, and don’t try to sell us something that we don’t need. If anything they’d probably try to talk us out of it. They are absolutely trustworthy, and a very good company.

Description of Work
Reliance Heating & Air Conditioning Inc. had installed all the equipment for us when the house was built. They had last come for a semi-annual check of the equipment before the change of the season.

We have had really good service with them. I think they over-sized us a little bit. We got a really great price. I'm not sure if they always give this price or if it was a fluke though. The price of $2800 was for the 3 and a 1/2 ton unit, work and a programmable thermostat.

Description of Work
We use Reliance for our heating and air conditioning. They replaced our entire system: duct work and compressor. They still maintain our system.

If they service our system and find a problem before the weekend, they don't charge me extra because of the contract.

Description of Work
I have a maintenance contract with them. They come out twice a year to check the system out and if there are any problems then they take care of those.

Second to None Electrician

No, Reliance Heating & Air Conditioning Inc does not offer a senior discount.

No, Reliance Heating & Air Conditioning Inc does not offer warranties.