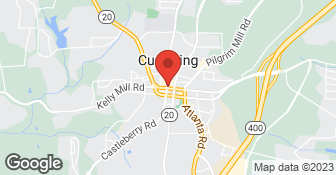 Acorn Tree Care has been working with trees in Metro Atlanta since 1975. Owned and operated by Clint Harris Certified Arborist, we are a full-service tree care company, passionate about creating beautiful treescapes for our customers. Our mission is to help your trees grow to their fullest potential, healthy and strong and through removals and pruning to ensure a beautiful treescape that complements landscape and structures in commercial, residential and recreational areas. Our goal is absolute customer satisfaction. In fact, we guarantee our work and we make sure that our customers are 100% satisfied....

They were very professional, punctual and tidy. The gentleman who came to give a quote recognized the severity of the situation and worked us into their busy schedule. It was more expensive than I would have liked, but less than other quotes received. Given the size and condition of tree and the close proximity to the house, it was expected and reasonable.

Description of Work
Needed a huge, dead oak tree removed. It was very close to and leaning toward the house.

We had Acorn remove two trees that were blown over/damaged in a storm, remove nine other trees of various sizes, remove all of the stumps and trim two additional trees. Their proposal was slightly lower than a competitors price. Brett Jordan came out to review the job and prepare the proposal and we found him to be very knowledgeable and helpful in determining what work needed to be done and how the trees should be trimmed. The removal crew arrived on time on the scheduled day. They were professional, polite, diligent, safe and took care to protect other trees and our yard. We will definitely use Acorn again when we have tree care needs and highly recommend them to others for their work.

Description of Work
Removal of tree blow down in storm and removal and trimming of additional trees (including stump removal).

Brett of Acorn Tree Care came out on a Saturday (on his day off) to give me an estimate. I had called Acorn a year or so earlier for an estimate on having some different trees removed and I ended up going with another company. (Big mistake on my part.) This time, I chose Acorn and was totally satisfied with the quality of their work. Brett kept me informed as to what day they would arrive. The crew came out on schedule, cut down the trees and hauled everything off without creating a big mess in my yard. Most importantly, they did not damage an heirloom bush next to the large cherry tree that needed to be removed. I had told Brett when he came out for the estimate that I needed them to protect the bush because it had come from a cutting of my wife's mother's bush and her mother had died last year. After the work was done, you'd never have even known that the cherry tree had been there, other than the mulch pile from where the stump was ground. Their stump grinder also did much better work than the previous company I hired. The mulch piles were neat and tidy. Also, Acorn's office person, Heather, is very responsive to any questions/concerns. I would definitely call Acorn out again if needed.

Description of Work
I needed to have a dead pine tree, a very large cherry tree and a few other smaller trees removed from my front yard.

Acorn exceeded my expectations. The crew was obviously very skilled and efficient. They arrived on time and were done including an excellent overall clean-up in a very timely manner. Very professional. Plus, I had five estimates and they were the best price for my job.

Acorn tree is an excellent company . The owner Clint is very professional and since he is an arborist knows a lot about how to manage tree removal and tree care. The crew was very nice and they made sure everything was done exactly as the proposal was written. Clint came out to our house twice beforehand to make sure we were comfortable with the project. He safely removed two massive trees with his crane and one was in the backyard which meant he had to lift it over our 2 story house. There were other trees that were removed as well. The crew worked all day past 6 pm in extreme heat and cleaned everything up. I like how Clint was personable and honest. I also like how he wrote the proposal in detail so that nothing got left out or misinterpreted. I liked being able to talk to him on the phone when there were questions . We will be using them again if we need tree work.

Acorn does really nice work. They clean and shape trees with penetration pruning and crown cleaning - the proper way to maintain healthy trees. I really appreciate that they do things the right way.

These folks are excellent. I've been using them for years and wouldn't use anyone else. I first came to know them through a landscaping business I worked for who used them on residential and commercial jobs. Now I use them for my own property. Clint is knowledgeable, listens to what you want, doesn't try to up sell you or talk you into something you don't need. He advises, you decide. The climbers are experts and I've watched them take down huge trees in my wooded areas and near my house, lay it just where they want and barely touch another tree. Clint also walked my wooded property this year and checked trees adjoining my neighbors to make sure those trees were ok. Hire them.

Description of Work
Removed a *huge* dead pine in a front wooded area and a *huge* poplar that had been struck by lightning. The poplar was in my front yard and would have hit my house had it fallen. They also pruned a very large red oak that had some large dead branches to give it a better chance of survival. Took everything away and blew off the driveway when they left.

These trees were close to the house and some leaning toward it. Acorn came in with a quote lower than other companies, provided great customer service, and delivered excellent work. The crew worked efficiently and completed the project very quickly. There was little if any impact to the grass or surrounding bushes and trees. They were very careful to protect our lawn and you couldn't notice that their equipment had been there. Acorn definitely lived up to the promise. We will refer Acorn to our friends and neighbors and call on them them for any additional work we may have.

Excellent service!! The Owner, Clint Harris, is an extremely knowledgeable Arborist. He explained what each tree species is on the property and made his professional recommendation on what trees should be removed. His crew arrived as scheduled and the work was performed carefully and professionally. I highly recommend this company.

Small crew dedicated to safely removing diseased or dangerous trees. Inspection of trees to be done before the start of any job. Payments to be done after completion of job.  …

Family owned and operated since 1921. Roofing is our heritage and quality is our tradition. We are GAF and Owens Corning certified. Fully Licensed and Insured. Insurance claim experts. We will professionally install the roof you choose and will recommend the best options for your home and roofing needs. We offer Roofing services as well as other needs for the home: • Insurance Claims Specialists • Roof Repairs • Complete Roof Installations • Roof Inspections • Gutters • Windows • Flooring • Concrete We offer insightful and honest roofing inspections. Based on 94 years of experience, we work with you to determine whether you need a new roof or roof repairs. We offer the best approach for addressing your roofing situation – in terms of durability, style and value.  …

Acorn Tree Care is currently rated 4.9 overall out of 5.

No, Acorn Tree Care does not offer warranties.