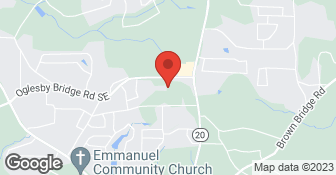 Thank you for visiting the website of Jabez Power Washing. We look forward to assisting you with your house washing, driveway washing and roof cleaning needs in Grayson, GA. Whether you need pressure or soft washing services, we're the crew for you.  …

All work completed and area cleaned up at the end on each day. Workmanship very good, pleasant and attentive to concerns .

Description of Work
Replaced and installed new kitchen ceiling sheetrock, tape and joint all seams and corners. Sanded preped new surface, painted.Installed new sheetrock on section on ceiling and wall in garage. Preped and jointed all seams and sandered ready for paint.

Terry did a great job! It was a challenging repair and he figured it out in no time. It still works great and I will definitely be calling him again.

When Terry first came to look at the house and give an estimate, I liked his straightforward unpretentious manner. He showed me the places where he could tell I needed carpentry work because the wood was soft or had water damage from bad gutters or typical window brick molding rot. He explained that until he removed the damaged wood he could not tell how extensive the repairs might be, but gave an estimate based upon known work needed. He assured me that he would try to minimize the cost of any additional repairs. Terry has a one-man business, but usually brings another painter with him when Terry needs to focus on carpentry work. I had gotten a couple of other estimates, including from a large company that operates numerous crews and is highly rated on Angie's List, to be sure they were not too different in price. Terry's invoice is informal (I had to ask for one), compared to the computer-generated job order from the larger firm. My gut feeling was that I might receive more personalized service to handle complex repairs that might arise, if I gave Terry a chance. I am glad I took a chance. The job took longer, but I am certain that Terry was capable enough and sufficiently dedicated to providing the service that he went to great lengths to solve problems. He stands behind his work, if any problems arise. Most of the prep and painting of the house was performed by a younger companion, Robbie, who was very competent and courteous. The finished paint job looks great, the coverage is excellent. He did the whole job with a brush, because it and quot;looks betterand quot;. I most appreciated the methodical approach that Terry took to repairs. He has been doing this for decades and knows his how houses are put together. But at a couple of repairs he had to figure out the best way to make it weatherproof and attractive looking. The biggest challenge was an original window whose framing had rotted from water damage. The larger painting crew told me that I would have to buy a new window to replace it. Terry told me he would try to repair it, or else search and find a match, since it was paired with another window beside it. That style of window was no longer made. Terry pulled the window out, temporarily replacing it with plywood, and was able to find a carpentry shop through his glass supplier, who completely rebuild the wood frame, such that the casement mechanism still functions, at a reasonable cost. Time after time, I was impressed by how Terry thinks before he acts. He looks at the problem and considers it, until he feels he has arrived at the best possible solution, taking into account aesthetics, function, and cost. When a couple of times I thought the outcome needed to be modified, Terry and Robbie responded well. As always, there are trade-offs. There are downsides to working with such a craftsman: the project took longer than it would with a large crew that is more mechanized, but I received more customized results. Once I made it clear to him that I wanted to be called if he could not arrive when I expected (due to weather, illness, or whatever), then he always made an effort to keep me informed. Terry did request partial payments during the project, but I felt he never asked for more money than would cover work already performed. At the end of the project Terry provided me with all of the materials invoices for wood, paint and other supplies. The project cost me a lot, but the price was good for the amount of labor and materials involved; all of these costs were documented and included in the final price. I am very happy that I hired Terry Daniels.

Mr. Daniels was professional and skilled in his manner and work. His crew were at their assign tasks and were couteous . The grounds and work areas were well policed and well maintained. Terry was mineful of our budget and keptunexpect costs to minimum. I plan to have Mr Daniels back for additional work on my home in the near future.

Met at location to receive quote.

I called Terry and he came out with in a couple of hours to give me an estimate and then was able to start in a few weeks. The job went pretty smoothly and he even came back a little later to fix the toilet and install gutters on the back that I hadn't decided at first that I wanted.

He did an excellent job. I have had quite a few people in the neighborhood admire the jobs he has done. It was a lot of work. He did a beautiful job. The price was perfect. He is very conscientious and does things the right way. He is coming back to do some more work on the interior of my house. He does great work.

Description of Work
He painted the exterior of the house. He also replaced some doors, replaced some wood and did some roof work.

This guy is great; he did a fabulous job. He gave me a free estimate and when he came back to do the job he was right on time. He called me back twice to tell me he was on his way and was very, very professional. He helped me pick out the stain color and he did all the work by hand. I will definitely use him again. He was excellent.

Description of Work
He stained our deck.

Terry worked from 8-4/4:30 each day except when the weather didn't allow outside work. He was open to all suggestions and last minute changes as the deck part of the project evolved. His repair and paint work is top notch. He did a very good job of matching dissimilar siding on our fireplace housing which was a concern since the original material was no longer available.

Description of Work
Terry was initially hired to repair some rotten siding and facia boards, then repaint the exterior of our house. He did an excellent job repairing the rotten wood and Brush/Roller painting the exterior of our house. We asked him for an estimate on rebuilding and expanding our deck and sealing the patio under it. The completed deck work took about 5 weeks with Terry replacing all but the joists of our original deck and adding a 120 sq ft lower deck. He also added a pergola on the upper level. His finished work is excellent. All joints are neatly done and the edges are all routed to enhance their appearance.