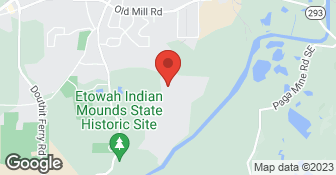 Owner operated. Cost is determined by the job. No service charges. Extra charge for after hours service. May contact through email.

When we first started the project, he came out and gave us a great proposal at a very low rate. His first impressions went a long way. At the outset, he required $2250.00 to order some supplies and columns; afterwards we then changed plans to use cedar posts rather than columns. The previous costs would go toward the new plans. He then asked an additional $3700.00 to start the job, and subsequently requested three more payments of $1800.00 each. We made the first of these payments to him. After which, the quality of the work started to seriously decline; it seemed like he was smoking more than he was working. We decided to add an outdoor bar into the plans, which he quoted at an additional $1150.00. We rearranged the payments he had requested because he told us that he ?needed? the money upfront. We then agreed to pay him two installments of $2400.00, once during the job and once after. After the first of these payments we left for a short trip. Upon returning he was nowhere to be found. After a week of trying to get in contact with him, he finally sent a kid to deliver some of the remaining supplies. It did not seem like he was going to come back out, and I got the feeling that he had no intention of finishing the job. He claimed that first his wife and then his baby were sick. We spent $10300.00 all together, plus a bit more for supplies we never received, and he did not finish a large majority of the work. I felt coerced and taken at the end of the experience. In the end, he gave me $600.00 back to retrieve his tools and equipment. I simply wanted things to be over and done with, so I agreed to sign something stating that I would not sue him or sully his name. The straw that finally broke the camel's back was that the final load of lumber he delivered was not what we had agreed upon; not even the correct type of cut and I had to pay to have it delivered. The best part of the entire experience was the opening letter.

Description of Work
We hired him to create an outdoor living area; this included building a fireplace, pergola, a garbage enclosure, outdoor shower partition, and a bar along with veneering a fountain I already had.

I have had a good experience with Anthony's Remodeler. He was prompt, professional, and he never tried to rip me off throughout the project.

Description of Work
Anthony's remodeler came out to remodel my kitchen. They replaced the cabinetry, installed some molding, and a custom hood above my stove.

If you are looking for a Atlanta Painting Contractor, you have come to the right place! J. Stevens Painting is a full-service interior and exterior paint contractor serving Atlanta and the surrounding metro area. We are THE painting contractor Atlanta calls on for detailed estimates, competitive pricing and on-time appointments. Whether you’d like to paint an accent wall, or the entire interior and exterior of your house, no job is too small, or too big for J. Stevens Painting. We always go the extra mile for our customers to ensure there is minimal disruption to your household or business. J. Stevens Painting will complete your painting project beautifully and on time.  …

Rodger's Remodeling & Construction LLC is currently rated 3 overall out of 5.

No, Rodger's Remodeling & Construction LLC does not offer eco-friendly accreditations.

No, Rodger's Remodeling & Construction LLC does not offer a senior discount.