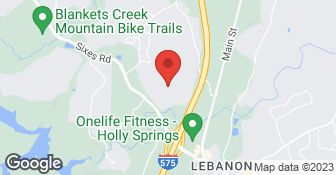 Full-service septic tank repair, installation and maintenance company. We have established a reputation of top-notch customer service, integrity, and effective results. Our goal is to find a solution to all of your system issues. Cater to homeowners and businesses. We also have the latest equipment and only use commercial-grade chemical treatments. We aim to give your tank the overhaul it needs. We are licensed, insured and adhere to the highest industry standards - proudly serving Bartow, Cherokee, Cobb, Douglas, DeKalb, Forsyth, Fulton, Gwinnett and Pickens counties in the Metro Atlanta area....

Better than expected.....after 20 years without any septic tank maintenance, I was referred to Raysseptic.com for services. Trevor quoted me a price that included digging the tank but I decided to dig it myself for the exercise. After a whole lot more digging than I anticipated, I called and reported my digging adventure to Ray and delivered a picturesque description of my results.....Ray said the digging was included and they use a Deere 17G excavator to do the work in no time at all. Ray stated that everything I described from my digging sounded normal and that Steven would arrive in the morning for the work. The next day, Steven arrived on time, surveyed my work, unloaded his Deere 17G excavator for some fine tuning to my dig and proceeded to expertly operated the machine to lift up my tank cover. After 20 years, I did not know what to expect but happily for me, the opening revealed nothing but water, albeit, very dirty water. Steven hopped off his excavator and moved to the edge of the tank. Leaning over the tank with his hands on his knees, he took a closer look. After a few moments, he raised his head, looked at me and said, "You're ok, we don't need to pump your tank." Somewhat puzzled I asked "why". Steven stated that by pumping out the dirty water, I would be removing the valuable enzymes that were happily eating away at whatever has been sent to the tank and that "healthy" enzymes are important to a properly working septic system. Somewhat skeptical I asked Steven to probe the tank to see if we quickly run into a thicker substance. Steven lifted his shovel over the tank and like a hot knife through butter, down it went...all the way down without the hint of interference. After 20 years of zero maintenance, I was stunned but I was getting ready to be stunned again...... Thinking that a discount was in order since no pumping was needed, I politely asked, "Well, since there will be no pumping today, what is my price?" Steven replied, "no charge". I was not ready for that one, especially in this day and age. Steven mentioned since he did not have to dig it open, he would not charge me for anything, he went further and said he would use his excavator to cover my digging. Raysseptic blocked out at least two hours of hourly time, rolled a very large truck maybe 20 miles to my location, burned several gallons of diesel fuel and could have easily gone ahead with the pump job and invoiced me for the going rate for a 1000 gal. tank but choose not to. One thing I'll say about Raysseptic is these guys have integrity. This was the first time using the services of this company. I will forever more request additional services should they arise and I will highly recommend them to anyone in the need of septic tank services and gleefully share this story. Jeff Casses Marietta, GA

Had leak from septic tank area. Rays responded very quickly (out that day) and were courteous and knowledgeable and for that I would rate them very high. I also would rate them as very expensive. Turns out the issue was not the tank but the PVC septic line broke coming from the house to the tank. Tank looked great and had been pumped less than 2 years ago which was why I was surprised to see the leak. No tank pumping or drain line cleaning involved but as it was a 30 year old tank, they did recommend also replacing the old degrading (but still functioning for now) cement baffles in and out. These are replaced with about $85 PVC fittings retail, $100 to be generous for having them right there. I grew up doing minor plumbing and have done my own repairs on broken outdoor PVC water lines at this very house. Literally digging them up by hand and repairing so I know the work involved and understand the dirty part of septic work. My estimate was the additional pipe and fitting to be replaced was about $100 dollars too so $300 cost in actual materials. Two men were there for 2 hours finding and fixing the issue. I also understand overhead so $150 per hour per man for $600 plus the small backhoe for $300 per hour or another $600. That put me thinking around $1600 so anything less than $2000, I would have thought reasonable given the speed and knowledgeable work. The actual cost was nearly $2500. Its not like once they are out there with the hole opened up to find the issue that you have a lot of options to not get the work done. When I commented I thought that was really high, it was implied that was what anyone would charge. I could have not done the two baffles but to have them done separately due to man power and getting someone out, it would have then cost the same even if the actual baffle price was less because you have to someone out to do it alone. In the end, while I give Rays high marks for timeliness, skill, and knowledge, I felt I paid over and above for the service. Sometimes you have to do that to get something done when as in this case I did not know what the issue was to price it in advance, but it did make me feel the price was excessively high because once they had to dig up the tank to assess the problem, then I was a forced to pay whatever they estimated. Would call them in a emergency but I do not think I would make them my regular service without seriously vetting price.

It was a wonderful service. They did a very great job in repairing my septic tank, price is fair. They fix it correctly i have no complaint.

Description of Work
They did septic tank repair.

Techs kyle and Vinny came to my house after speaking with Ray about emergency septic backup on a Sunday. They were great in explaining what needed to be done to just get me back working and addl work that would make system work better. They were very thorough and careful

I wish I could mark this 6 stars. We were under contract on a home and Ray's did the Septic inspection for us. The inspection service was thorough and reasonably priced. During the inspection, the inspector let us follow him through the yard and answered all our questions. They found that the septic was over flowing and when the owner/seller requested it, they pumped the septic and did all the necessary repairs immediately. Additionally, we had to explore the viability of installing a pool and do so very quickly as we were in our due-diligence window. Ray was extremely helpful in answering questions, guiding us on pulling the permit, helping us understand the permit, and helping us understand what questions to ask the County to determine if we could put in a pool on that lot. He always answers my calls and takes time to talk to me and even lets me email him documents I got from the County and would look at them for me and provide his professional input. After much diligence we had to terminate the contract on that house. As such, we are still searching for a home that we know we'll want to put a pool in. As we find homes with septic systems there's so many questions that need to be answered to determine the viability of a pool install. He is still answering my calls and looking at documents for me to help us understand what we're getting into. Again, all of this is without a contract or payment. He's just being kind and helpful to a stressed out home buyer. He's so helpful and professional. He really knows his stuff. And, if/when we ever find our home in this crazy market we will absolutely continue to use Ray for any septic services we need.

I needed a letter regarding my septic as part of applying to be a foster parent. Quickly responded by phone and was professional, and someone came out to the site, however they tried to upsell me on repairs and work that was not needed, totaling almost $3,000. I called other septic companies regarding prices to compare the itemized categories, and all noted that they were upselling and most likely not necessary. I will have another company come out to do any work, if any at all is needed.

Great! He was on time, he completed the work and the septic tank is now functioning as it should.

Allen did an exceptional job! He was very well informed and gave us clear direction on what was needed to repair our system. We had quite a dirty job and we really appreciate all of Allen’s hard work to get us back in business. Fantastic!!!

Three visits: 1st - Inspection to see what might be needed; 2nd - With a transit verified what was identified during the initial inspection; 3rd - Performed the work to correct another company’s bad work. Ray is easy to work with; listens well; does the work needed to be done. His business practices focus on providing a customer the best possible service.

Description of Work
Correct a bad installation by another installer.

UPDATE: ***The man charged me $400.00 to clean out my septic input line. The septic tank is buried, he laid on the grass, used his hand, reaching down into the ground and into the septic tank, at 5'8" his reach is short, then he grabbed a stick, more of a twig, about 12" long to "clear the pipe". He did not use any equipment and I have had the line clog twice since. In addition, he charged me $279.00 for a chemical I never saw him use, never saw him put anything in the septic tank. I told Ray when he called just after I filled out the Angie's List form that I am disabled on a fixed budget. He did not show for the job nor did he ever call. I did try to call him but all I get is Angie's List when I call. I am not happy, I have used Angie's List for years as do many of my friends.*** They misled me, lied about the work done, over charged me, took advantage of my lack of knowledge about septic system, businesses like this give hardworking and fair businesses a bad name. I will never hire again. Angie's List please remove this organization from being recommended.

Ray's Septic Service, LLC is currently rated 4.4 overall out of 5.

No, Ray's Septic Service, LLC does not offer eco-friendly accreditations.