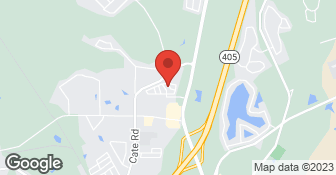 Premier pressure washing is a small business that offers services in Bulloch county and surrounding counties. We specialize in: Roof cleaning Oxidation removal Deck and patio cleaning Residential cleaning Commercial cleaning Window cleaning licensed and Insured. We guarantee your satisfaction, and we won't leave until the job is done right. We pride ourselves on the quality work we provide, while delivering great customer service! Call or click to schedule a free estimate today!  …

The House Medic LLC is a full service company specializing in residential remodels and repairs. We do kitchen, bath, whole house remodels, and any repairs from foundation to roof. All work is performed or directly overseen by the owner.  …

Description of Work
IMPORTANT! PLEASE READ! Overall rating of "A" does not apply! I was simply checking contractors' names and ratings to consider for future projects. I did not contact them so it is not appropriate for me to submit a review at this time.

He did a great job he pointed out several things that I was not aware of. The price was reasonable. I would highly recommend him.

Description of Work
He did several plumbing jobs for me.

We have used this provider before so we knew we could trust him to allow him to do the replumbing on our house while we were out of town on vacation. Our house (which we bought as foreclosed) continued to have problems with stopping up in one of the downstairs baths. We were leaving for vacation on the day that we had a major backup and called Jason and Eddie Turner. They came out immediately and unstopped the drain and showed us with pictures how the problem kept happening because of a really bad plumbing job of the piping. We told him we would have to wait until we returned to have them replumb. He told us that they could come out and complete the job without our being here since they would not need to come into the house to do it and we would not have that to deal with when we got back. They came on Sunday to start the job and finished it on Monday according to our neighbors. They always clean everything up (which they did on the backup before we left on our vacation inside the house). They even called us while we were gone to let us know that it was complete and also that they had found a leak in the water line which we told them to fix (we knew there had been a small one but it had gotten worse) They did not even charge us for fixing that part of the pipe which they took out and replaced.

Description of Work
Replumbed the entire bottom floor of our home