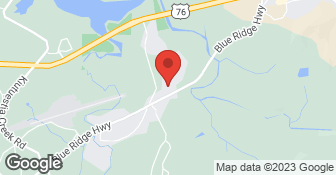 Byers Well Drilling has been in business since the 1960's. We can do as little or as much as you need for your complete residential or community water system. We are also very involved in the geothermal heating and cooling system installations. We have drilled the geo boreholes and installed the hdpe piping. Please give us a call for further information. DBA: Southeast Geothermal Inc. Additional Contact: Tracy Dillard Additional Website: http://www.segeothermal.com/...

Finally got Tod at Action Motor in Columbia, and he services and replaces well pumps... Mine does not have a well 'head' sticking up out of the ground, so he would have to hunt it. He said it would cost me $1500.00 plus for his crew to try to locate the pump, then he said they probably wouldn't find it... so, "What's a Mother to Do???"

Description of Work
No one returned my invitations.........

No reply after several attempts.

Description of Work
Check local codes and put in a fresh water well.

Description of Work
Helped Find Source Of Leak In Well Line. Be Sure To Ask Them In Advance Approx Cost Of Job. They Put You On 'clock' Minute hey Leave TheIr Office. Bill Runs Up Incredibly Fast Especially If Two Show Up So Don't Waste Time With Idle Conversation Or Give Them Tasks You Can do.

Description of Work
Instead of jerking the well head first -- which would have cost a bundle -- they went downstairs and checked out the mechanical part of the well. They replaced the part which they had on the truck. And then they changed my water filter why they were standing there.

Description of Work
repaired wire in well, took very little time, and charged a very reasonable price - will always call them when I have a problem

I do remember what they did the last time I called them. My well pump had quit working and it turned out to be just a broken wire. They could have told me that I needed a new pump and I wouldn't have known the difference. They are very honest and that means a great deal to me.

Description of Work
It has been a while since I've needed them. I should have written a review right away, but I absentmindedly forgot and now I have forgotten exactly what they did. I did use them several times and they were always very prompt, quick to diagnose my problems and very reasonably priced. I will never call any other company. They are the best!!!!

Gave us a price quote of $3400. Truck got stuck because the driver came in the way he was told not to use. When the electric source and previous pvc was severed the electric wire was lost. Dug for days to find it tearing up the field in the process. Claimed the well was blocked with 2 x 4s. Sent a bill for $5400. We only paid what the insurance had sent $3400. Never heard from the company again.

The men came back the next day to complete the repairs to our well pump. They surveyed again what the problem was and communicated with us the whole time. Upon our permission they would complete that repair. We found this company to be very professional and the men were very accommodating and personable. They were here for most of the day and upon finishing the job they came to let us know they were leaving and that everything they tested worked . This company will get our business again in the future. I especially liked the fact that they were so up front about everything, from the time and a half fees to getting our permission before fixing or replacing any part.

Description of Work
When we called late in the afternoon, they said they were in the neighborhood and would come to see us after that job was completed that day. They did as they promised. Upon arrival the men told us up front that they were now on time and a half regarding their fees. We told them to stay long enough to give us an idea of what was wrong. They did and we asked them to please come back in the morning to complete the repairs. They did as we asked.

Description of Work
Installed a 250 ft. well. Actual price was $1000 greater than estimate. Work did not pass County Health Dept. inspection, Lon Dillard (owner) refused to come out an inspect the work that was done. Electrical work was sub-standard and dangerous and had to be re-done by another contractor at our expense.

Description of Work
I have used Byers Well Drilling in the past. The last time they came out because my well wasn't working.

Thank you for the great compliments. We enjoy customers like you!!!

Tri State Water Services offers any and all water well and water filtration needs. We are a small family and veteran owned company with unbeatable prices. Tri State Water offers 24 hours service 7 days a week. Our owner and operator has an extensive background in well service and is a water filtration expert. Tri State Water services operates under a 100% customer satisfaction guarantee. Call any time on any day including holidays we look forward to serving you!  …

Coolray has served the Atlanta metro area since 1966 and offers professional heating, air conditioning, plumbing and electrical. We base our business principles on people helping people with honest, dependable service backed by our peace of mind warranties and guarantees ensuring your 100% satisfaction. 350 employees. No subs. Charges a flat rate. Senior Discount on Service Repairs only, cannot be used with other offers.  …

Byers Well Drilling Inc is currently rated 4.2 overall out of 5.

No, Byers Well Drilling Inc does not offer eco-friendly accreditations.

No, Byers Well Drilling Inc does not offer a senior discount.