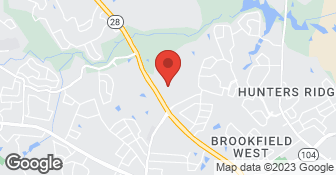 We are a well established and experienced painting company that has been in business for twenty years. We specialize in upper end homes and specialty retail work. We have experience with specialty finishes and faux finishes. Some service areas will require an additional travel and fuel surcharge. We do not use subcontractors to perform work on your property. All of our craftsmen also must pass a criminal background check as well as have above average work experience. We did not purchase our business or its name, we have earned it with 20 years of successful experience....

I wouldn't recommend them. In the final payment, they were jacking up the price because it took them 5 months to paint my house. The owner didn't put his whole crew, he'd send one or two here to paint. My house should have been finished in a few weeks not 5 months. He yelled at my wife. I got dirty paint. I got uneven edge lines around the molding around the ceiling. They left my water on all night. They turned my AC down at 65. I got a $500 electric bill. Do you see how happy I am not. I am the customer and I shouldn't be tracking him down, he should be calling me.

Description of Work
They started painting my house in June and didn't finish till October. He did the interior and exterior.

They are awesome. I wish you could see it. It looks great! They had to work around us as we were moving in and we super courteous. They also were helpful to us when we found that the movers had broken the wheels on our fridge and scratched our hardwood floor. We plan to use them again when it is time to do the ceilings!

Description of Work
The came in and painted a house we were buying. All rooms and bathrooms, hallways, etc.

It was a pleasure working for you and [member name removed]. We will be there when you need us. Thank you for the very kind words.
5.0

Painters were on time. Got right down to business staging the house for painting. They were careful to move all furniture away from the wall and covered every surface to protect it. They did a thorough job making sure the paint covered well including doing a third coat when it was necessary. They cleaned up as thoroughly as they set up,. I would not hesitate to use this company again !!!

Brad was great to work with. He had great ideas that made the whole process a lot easier. He really understands color theory and light balance. His group of painters treated our house as their own. They were finished in 2 days and everything looked great. His quote was very prompt and easily understood. I would not hesitate to use his services again in the future.

Description of Work
Painted the interior of the home in preparation for selling it.

My wife and I love the work Brad and his crew did. Our kitchen needed a fresh coat of white paint. The original was 15 years old and yellowing. My original plan was to do the work myself and save some money. It quickly became to big. On top of that, my wife wanted the kitchen back together, painted or not before her family came in for Christmas. I read some reviews and found Color Works. I called Brad and had him come out. My wife and I explained what we wanted done. The main stipulation being that everything had to be together by December 19th. He said his people would come on Wednesday the 11th to take everything out and paint the boxes. They would take the doors, spray the front and back, bake them then bring them back in the following Monday. We also told him we would need to get two new doors made because I had made a modification to the kitchen. He said he knew a person locally who makes cabinet doors so that wouldn't be a problem. They ended up costing $30 a piece which included being cut to size and routed. His people were right on time and very courteous. I left to go to work and when I arrived home everything was locked up nicely. Brad called me Sunday night to say the original brush marks were really deep. If they tried to machine sand them down, it would go into the wood, so they would need another coat of paint. He said it wouldn't cost any additional in labor and as long as they didn't have to buy any more paint, I wouldn't be charged for it either. Of course, I agreed. They came in Wednesday the 18th and installed everything. I asked if I could have the left over paint to do touch ups which he readily gave me when I gave him the check. Since we have the older traditional style hinge, he showed me how to bump them around to even everything up.

wonderful - the workers were here everyday and continued with the job until I was completely satisfied.

Brad and his crew did an excellent job painting our house and were able to start immediately.

Brad was very prompt with the estimate and scheduling the job. Brad and his employees are always very courteous and respectful. They moved and covered furniture in all rooms. After painting, they moved everything back to its place, (even re-hung a pair of drapes). They cleaned up before leaving in the afternoons. Overall experience was great! Very pleased with the job they did. I am in the process of having them paint the exterior of my house.

Called Brad last Feb for an estimate. We had the work done in August. The job lasted about 1 1/2 weeks. The crew was extremely professional, and polite. Came each morning on time, and worked each day with a short lunch break. Furniture was covered and moved as promised as each room was painted. Everything about this job and these men is positive . We are extremely please with the outcome. Highly recommend Brad and his crew.

Description of Work
Painted all of the woodwork upstairs and downstairs, mantel, bookcases and kitchen cabinets.

The quality of the work was outstanding and the crew was very courteous.

We have the experience and dedication to get the job done right! Specializing in Painting and Staining services; We guarantee your satisfaction, and we won't leave until the job is done right. We pride ourselves on the quality work we provide, while delivering great customer service! Call or click for your FREE estimate today!  …

Call Top notch painting for all your painting needs if it’s interior or exterior we got you covered, we do small Sheetrock repair if you want Topnotch service call us today!  …

Our mission is to be a provider that brings back the personal touch with our customers. We will build a relationship that will last a lifetime after you see our quality work. As a locally owned and operated business we feel invested in our clients and constantly strive for customer satisfaction. We won't leave until the job is done right! Call or click to schedule an estimate today! 803-465-5135  …

Color Works Painting is currently rated 4.8 overall out of 5.

No, Color Works Painting does not offer a senior discount.