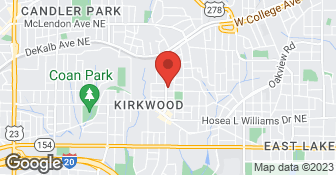 Description of Work
Removed a well weathered roof, made significant carpentry repairs to the deck, installed rhino sheet covering, laid the shingles down, sealed the base of all sky light windows in the roof and painted a metal outlet on the backside of the house.

A few of our neighbors highly recommended Robert's Roofing when I posted in our neighborhood Facebook group asking for leads on good roofers. We got two other bids but decided very quickly that we wanted to work with Keith. Not just because of his no-frills sales pitch or his cool hipster glasses but because he oozed integrity. In our home ownership experience, roofing is one of those jobs that you do once in a lifetime. It's not exactly a repeat business and we felt like there wasn't a lot of incentive for contractors to do right by us. When he sat us down and broke down what each dollar amount we were being charged paid for. And he assured us that his contractors were paid a fair wage and had a stake in the company (and therefore, incentive to do a good job). We scheduled a date for construction and the night before, a waste container was delivered to our driveway. We'd been informed before hand of its expected arrival and had moved our cars out of the way so they wouldn't need to ring our doorbell to deliver it. The next morning at 6am the roofers arrived and started the quieter part of the job - removing the old tiles. The noise was bearable until about 8am when they started the louder work. By then we were up and ready to leave for the day and sure that our neighbors wouldn't mind the banging too much either. When we returned home that evening, the roof was complete and it looked great! The debris from old materials had been completely cleaned out of our front and back yards and the waste container was gone. We're thrilled with the work they did and happy to have chosen such an honest and hardworking team for the job.

Description of Work
Robert's Roofing removed our old roof and ventilation system and replaced it with a new energy efficient roof with built in ventilation.

Beautifully - they cleaned everything down to the bare wood, did a perfect job with the new shingles and I never saw a nail or a scrap of roofing in my lawn or shrubbery. Keith Roberts is a very competent, very nice man to work with. I got estimates and he was not the highest or the lowest but right in the middle. When I called for his references, every single person said the same thing 'I sure wish all service providers were like Keith Roberts'. Now I say that. Also he suggested storing the extra shingles in the basement for any future repairs, which was good as I need them some years later. I am here today looking for a house painter and I see they do that too. Good!

Description of Work
replaced my roof

I had a small leak in my roof. Just big enough to have me outsource instead of do myself. Rob showed up on time. Friendly, professional. Punctual. Got a quote from a competitor, and he politely told me how the competitor was taking me for a ride. Showed me what had to be done. Saved me $600. Would use again for repairs and/or entire roof.

Description of Work
I had a small leak in my roof. Just big enough to have me outsource instead of do myself. Rob showed up on time. Friendly, professional. Punctual. Got a quote from a competitor, and he politely told me how the competitor was taking me for a ride. Showed me what had to be done. Saved me $600. Would use again for repairs and/or entire roof.

Exchanged messages with the owner, but sent workers before I had received any estimate. Completed initial repair in minutes. Then after a brief phone discussion with owner in which I described another issue (leak) that may or may not have been roof-related, workers showed up unexpectedly without an appointment and then waited until I got home. Checked for another repair (approx. half--hour) but needed no further work. Then charged $300. Although the owner said he operates like a friend, I prefer a more professional approach. As far as I can tell so far, the small repair seems to be holding. Plus is that they were prompt and workers very polite, but I would have preferred to slow it down, get an estimate, agree to a price before being charged, etc. If informality works, then this company may be fine. I probably won't use them again, though.

Description of Work
Roof repair to nail back in a single, small section of shingles that had slipped. Also checked the roof to determine source of a leak, but determined roof not the problem.

I was very impressed. He never gave me an estimate because it turned out he wasn't able to do the job, but he spent a lot of time going over things with me. I was very impressed and probably would have used him. I think I found him on Angie's List.

Description of Work
I spoke with Robert's Roofing about a job.

Excellent experience from beginning to end. Keith replied rapidly to my request for estimate, and even was able to turn on a dime when I screwed up my calendar and needed him to come over to meet me for the estimate "now". I got several estimates and decided to go with Roberts. Work was scheduled well in advance, the laborers and materials showed up exactly on time, the work was done perfectly, and the whole thing was done in less than a day. Keith knows the business and knows where you do and do not need to be spending a lot of money, particularly an issue for me and my modest old bungalow.

They were great and they were wonderful to work with. They called back whenever we would call him. They would clean up very well every day they left the job.

Description of Work
Roberts' Roofing came out and re-did our roofing.

We called Roberts' Roofing to come and give us an estimate for our roof. Keith made an appointment and met with us that week. He was very helpful in assisting us choose new roof and gutter colors to complement our house colors. Once we selected our colors we had a new roof within two weeks! Keith and his crew made the job go very smoothly, and the job was completed on time.

Description of Work
We used Roberts' Roofing to tear off and re-roof of our house. They installed and painted new lead pipe covers to match the house, installed new flashing around the chimney and walls, and replaced the gutters and downspouts.

Five Star Gutters LLC is committed to providing the highest quality gutter service to Atlanta. We recently earned the 2020 Super Service Award. 100% Customer Satisfaction Guarantee. Fully Insured with General Liability, Auto and Worker's Comp. Five Star Gutters does not require a deposit on most jobs, we provide 100% of the material and labor necessary to complete your job.  …

Insured
All statements concerning insurance, licenses, and bonds are informational only, and are self-reported. Since insurance, licenses and bonds can expire and can be cancelled, homeowners should always check such information for themselves.To find more licensing information for your state, visit our Find Licensing Requirements page.
General Information
Free Estimates
Yes
Eco-Friendly Accreditations
No
Payment Options
Check, Visa, MasterCard, American Express
Senior Discount
ASK FOR DETAILS
Warranties
Ask for details

ROBERTS' ROOFING INC is currently rated 4.8 overall out of 5.

No, ROBERTS' ROOFING INC does not offer eco-friendly accreditations.

No, ROBERTS' ROOFING INC does not offer a senior discount.

No, ROBERTS' ROOFING INC does not offer warranties.

Are there any services ROBERTS' ROOFING INC does not offer?