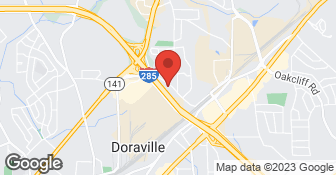 When your Atlanta home or business is plagued by pests, call the experienced pest control experts at Red Coat Pest Solutions. Our skilled and highly trained specialists offer environmentally friendly solutions using IPM methods to make sure your property is free of pests while protecting your family, pets, and environment. We specialize in bed bug, termite, and mosquito services using tried and true techniques like K9 inspections and bee friendly mosquito treatments. We offer one-off treatments and ongoing maintenance solutions to ensure a pest-free space. Whether you own a home or run a commercial property, our local, Atlanta-based team has you covered. Contact Red Coat Pest Solutions today! ...

Description of Work
Treated both stories of my house. They were extremely through and professional. Only challenge was initially connecting with them - they are super busy. Definitely pleased with results. Appears to have solved my problem which had gotten significantly out of hand.

Thank you! It was a pleasure working with you. I am glad you were pleased with the services.
5.0

The Bed Bug Answer said the other bugs would be dead as well but that didn't happen. It got rid of the bed bugs but and they have a 90 day guarantee but I'm working with another company for the other bugs.

Description of Work
The Bed Bug Answer did the heat system for the whole house.

We wanted a second opinion after our interaction with a company that said we needed bedbug treatment. We called Bed Bug Answer, which is run by a young couple. The lady came up and did the actual thing. The dog she brought was totally able to detect bedbugs whenever she hid the vial of real bedbugs. We paid a flat fee of $250 for the dog to sniff all over the house. The dog was amazing. The owner of the dog showed me she had a glass vial with real bedbugs in it. She showed it to me, and I was able to identify that they were in fact bedbugs because they showed pictures on the internet too. They were live. She went around and hid that vial of bedbugs in certain spots where the dog did not know where they were, and the dog sniffed the entire house including every bed, every couch, and everything where bedbugs usually hide. There was no evidence of bedbugs. It was the bed where the man of another company had gone over with a wand. There was none anywhere in all the places where he said that he caught a positive reading, but then she would slip the bedbug in a spot, and the dog immediately reacted. The dog could obviously smell the bedbugs, so we were really pleased with that. They were accurate. The dog was well trained. The lady was professional and thorough. Overall, it was a good experience. We would use them again in the future.

Description of Work
We used the services of The Bed Bug Answer in the last week of January 2011. The lady of that company came out with a dog. The dog sniffed for bedbugs in all the places in the basement bedroom and also the entire house including every bed, every couch, and everything where bedbugs usually hide. There was no evidence of bedbugs.

Thank you for taking the time to leave a review. It was fun to have you video our performance. I am glad that you did not have them!

Healthy Home Termite and Pest Control is a family owned and operated business serving Metro Atlanta. Healthy Home prides itself on an outstanding record of quality service. We have built our business by happy customers telling their friends and family about us. We would love the opportunity to provide your home with the most advanced protection available.  …

Breda Pest Management is a 2nd generation, family-owned Atlanta-based company that offers residential and commercial Pest Control, Termite Control, Rodent Control & Wildlife Exclusion, Mosquito Control, and borate Pest Control Insulation. Breda has proudly serviced the entire Atlanta Metropolitan area since 1975. Breda started with one client and one employee in 1975 and has never merged or acquired another company. The growth has simply come one client at a time. Earning the clients trust and respect. Also, we believe strongly in better service through science and technology. We are the only termite and pest control company in Georgia using a Flir infrared camera and a Termatrac t3i for all inspections. At Breda, we make sure our clients have the most knowledgeable technicians while always using the most advanced technology because at Breda, we simply don't have employee turnover. Using the best technology available while providing experienced technicians, that's Breda. Maintaining our commitment to customer service remains our top priority and that’s why at Breda, “Only the Sun Outshines Our Service."  …

Hawx Pest Control in Atlanta, GA - Reliable pest control services for property owners. If you own a home or business in the Greater Atlanta area, you know that a pest infestation can be one of the biggest headaches you’ll ever have to deal with. The good thing is you’re not alone! The dedicated team of pest control professionals at Hawx Pest Control is here to help. Founded in 2013, Hawx Pest Control has since become an industry leader in hassle-free extermination and prevention services. We utilize the latest techniques and premium quality products like Bayer Solutions to provide our customers with the very best in pest control services throughout Atlanta.  …

How is Red Coat Services is The Bed Bug Answer! overall rated?

Red Coat Services is The Bed Bug Answer! is currently rated 5 overall out of 5.

What days are Red Coat Services is The Bed Bug Answer! open?

Red Coat Services is The Bed Bug Answer! is open:

What payment options does Red Coat Services is The Bed Bug Answer! provide

Does Red Coat Services is The Bed Bug Answer! offer a senior discount?

No, Red Coat Services is The Bed Bug Answer! does not offer a senior discount.

Are warranties offered by Red Coat Services is The Bed Bug Answer!?

What services does Red Coat Services is The Bed Bug Answer! offer?

Are there any services Red Coat Services is The Bed Bug Answer! does not offer?