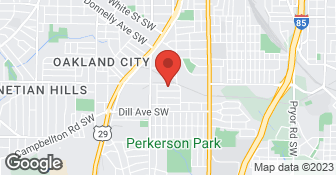 As a family-owned and operated business, we have been serving the greater Atlanta area since 1959. At AAA Screen & Window Co. we pride ourselves on every project we do. For over 55 years our philosophy has remained the same, provide superior quality, excellent service and, above all else, integrity. Additional Service Area- Cherokee, Douglas & Henry Counties...

If you want honest representation of the product, competence, and even modest customer service, hire somebody else. I hired AAA to replace 40-year-old storm windows on my old house. I requested low-emissions glass. AAA didn’t order low-e windows and they refused to correct their error. The salesman said it was my fault for not checking that the order was correct (and I had paid them a sizable deposit.) The salesman conceded I “mentioned” low-e, but that’s not what he ordered. He gave me a string of excuses about how busy he was and how he wasn’t really interested in storm windows anyway. (I guess the commission is higher on full window replacement.) He told me I didn’t want low-e because it isn’t effective on storms and “not worth the money” -- essentially admitting he ordered what he thought I needed, not what I said I wanted. I had done the research and knew low-e storm windows have been demonstrated to reduce heating and cooling costs. I argued with the salesman and he became so angry with me for not bowing to his expertise, he screamed at me and finally said “get off my phone” and hung up on me. I then talked to an employee in AAA’s office and asked if they could correct their ordering mistake. He said he would try. A few days later, he called to arrange installation of the wrong windows, no mention of low-e. All of this took many phone calls over several days, most of which I initiated because AAA didn’t return my calls. When they arrived to install the windows, they couldn’t complete the job because one of the windows had been broken. Then, when, per contract, they were cleaning the outside of the permanent windows, they told me they couldn’t remove a nickel-sized smear of paint the house painters missed because “we don’t have the equipment for that.” I offered them a razor blade. My experience with AAA was my misfortune. Don’t make the same mistake: get your windows from somebody else.

I was shopping around for putting screens in my windows. The total count of the windows are 18. Average price for putting screens per window is $15-$25 in Atlanta and neighborhood area which includes labor and material (checked and verified). Already got few quotes around $450 which is reasonable. Talked with David from this company and he quoted me $1000 which is double than the average price. Giving me excuses about traffic and traveling from the south side. Taking measurements and installing windows for screens is very easy. Installing takes less than 5 minutes per window. This is called Price Gouging which is till happening.

Description of Work
Installing screens in only 18 windows.

When we sell a job, I always consider that each transaction needs to be a 'win' for both of us or it is not a 'win' for either. However, occasionally we all have interaction with people that don't want to hear what you're saying. There is no company in existence that would send a professional installer from the south side of Atlanta, on a round trip through Atlanta traffic, almost to Cumming, GA, individually measure 18 windows, manufacture the screens to specific dimensions and then another round trip back through the traffic and install for a total of $270.00/$450.00. I invited this person to tell me who he is hiring, so I can offer other inquirers, that have left the Atlanta area, another option for their needs. Quite tellingly, his response was 'I don't have to tell you'. We have been serving Atlanta's citizens for 58 years and welcome the opportunity to discuss your project with you. Thank you, David Spivey AAA Screen & Window 404-758-1101
5.0

We experienced not only their previous level of excellence (from the screened-in porch), but they also had good advice on configuring the windows, and on selecting a color to match the paint-scheme of our house. The product is very good, the installers were prompt, courteous, efficient, and cleaned up thoroughly afterward. We cannot recommend them highly enough.

Description of Work
This was our second job with AAA (first time they screened in a porch, and did an excellent job -- which no other provider was willing to undertake), doing all new storm-windows for our house. Since the house is an old one, built long before pre-fabricated windows or standardized sizes, meant that every one of the 12 had to be custom-built.

It was perfect. They're very professional. They cleaned up after themselves. They are very nice people.

Description of Work
Screened in porch.

The screens are very nice, match the other screens and fit well within the window frame. These windows were older and more difficult to build matching screens that fit properly in the original frame. They had to make four trips to achieve the right fit and I am sure they sacrificed profit for customer satisfaction. Wonderful commitment and attitude by the installers and the management to get a job done right. Just want you hope for when a job doesn't go as everyone expected the first time; a commitment to do whatever is necessary to get it right!

They were thorough, installed quality products and did so quickly and on time once we agreed to all the details.

Reliable and professional. The service was completed and installed in the timeline given.

Description of Work
We have an older home and needed to have custom screen sizes made and installed. AAA measured, manufactured, and installed screens for 10 windows.

They were really good and professional. They have been in business like forever and it is family owned. I really liked them. They come to you and also do windows. There is some hand made part of it.

Showed up on time for the measurements and appraisal. Installed on time. Looked great.

Our mission at BluDre & Associates Inc is the planning and executing of our clients vision with INNOVATION, CREATIVITY, and ORIGINALITY. Providing our clients with outstanding quality work that is sure to leave a lasting IMPRESSION on our customers. BluDre & Associates pride ourselves on having COMPETITIVE prices and completing projects in a timely manner.  …

Whether you need a major repair, a renovation, or to check off a list of honey-dos, I can deliver professional skills at a fair price. It is our highest priority to get the job done right the first time on every assignment. Give us a call today for the fastest response! We offer free estimates.  …

No License Required for Trade
All statements concerning insurance, licenses, and bonds are informational only, and are self-reported. Since insurance, licenses and bonds can expire and can be cancelled, homeowners should always check such information for themselves.To find more licensing information for your state, visit our Find Licensing Requirements page.
General Information
Free Estimates
No
Eco-Friendly Accreditations
Yes
Payment Options
Check, Visa, MasterCard, American Express, Discover
Senior Discount
5%
Warranties
No

AAA Screen & Window Co is currently rated 4.8 overall out of 5.

No, AAA Screen & Window Co does not offer warranties.