ALL CLEAR CLEANING IS A FAMILY OWNED AND OPERATED CLEANING SERVICE. WE SPECIALIZE IN ROOF CLEANING, GUTTER CLEANING, PRESSURE WASHING, WINDOW CLEANING. WE PROUDLY SERVE THE NORTH METRO ATLANTA AREA INCLUDING ACWORTH, WOODSTOCK, KENNESAW, MARIETTA, CARTERSVILLE, DALLAS, ALPHARETTA, CANTON AND MANY MORE. WITH ONE CALL YOU CAN TAKE CARE OF ALL YOUR CLEANING NEEDS INSIDE AND OUT. ALL BACKED BY OUR 100% SATISFACTION GUARANTEE.... 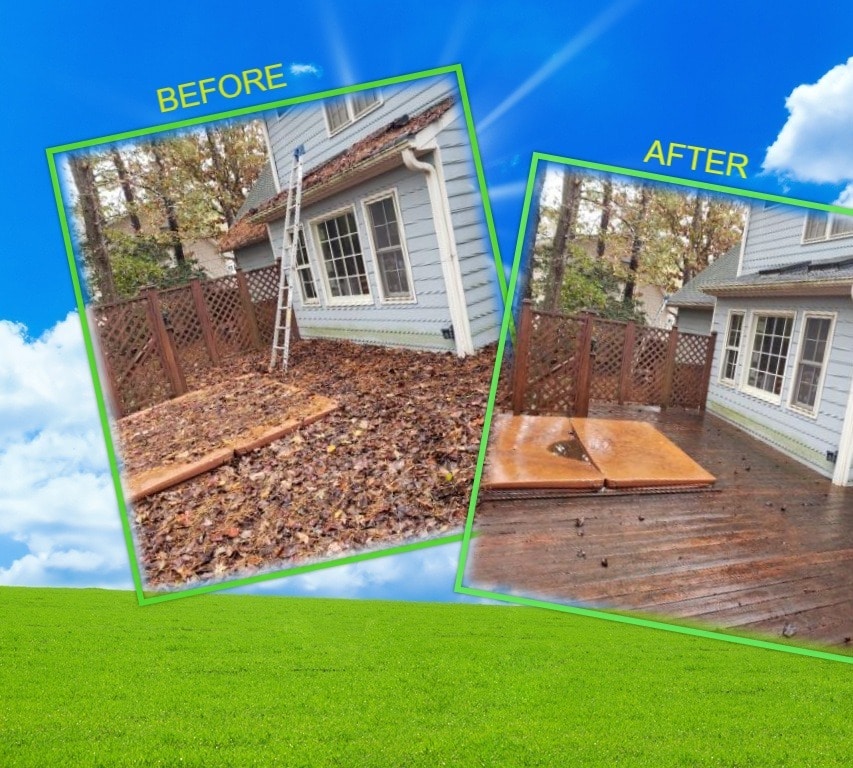 gutter cleaning
This includes cleaning out the gutter, blowing the roof off, clearing the downspouts, and the clean up. …
View project

Original Roof wash is guaranteed for 2 years. Within a year, moss is growing back. Called and set an appointment for 2 weeks out. Called them to confirm 1 day before that I was on the schedule. 1-3pm. They never showed. I called that evening and was told that she would call the employee and check on a status. Never called me back and now I have called multiple time over 2 days with no return call. Finally today someone who calls themselve a manger/owner called back to tell me that they will NOT honor the 2 year guarantee as the section of the roof that was washed was a section not covered under the guarantee as it was done as a "courtesy". No where is that shown on the receipt (see attached) When I questioned/argued he stated "How about a thank you for doing this back then as a courtesy?" That's when I hung up, blown away. DO NOT DO BUSINESS WITH THIS COMPANY. Absolutely HORRIIBLE

Everything went well. They guys were very professional and transformation on my townhouse was spectacular. I will definitely use their services again.

Thank you for your review [Member Name Removed]! We appreciate any reviews from our customers. It lets us know our guys are keeping up the good work out there.
5.0

Russell and Raphael washed our windows last week and did a great job!

Thank you for being a loyal customer of ours [Member Name Removed]! We appreciate you and your reviews!
5.0

Russ and Rafael did a great job! They showed up on time, were most professional and polite. My windows look great! I’ll hire them again and highly recommend them!

Thank you for your review! We appreciate any and all feedback from our customers. We'll keep up the great work!
5.0

I love All Clear and have used them for years. They are always on time and do a great job. The guys are conscientious and clean up after all the work is done. I wholeheartedly recommend them.

Thank you for your great review [Member Name Removed]! We love our happy customers!
5.0

Hi [Member Name Removed], Thank you for your review! We appreciate any feedback from our customers.
5.0

Great job! The office staff was amazingly nice. They arrived on time for their schedule appointment, were very conscientious, stuck to the quoted price, and even got rid of a wasp nest that was sort of in the way and cleared out a blockage in one downspout they noticed, without extra charge. They cleaned up after themselves. They also didn't get leaves in the part that didn't need to be done. They also gave me reasonable quotes on future window cleaning.

Hi [Member Name Removed], Thank you for your review! We appreciate any feedback from our customers. It lets us know our techs are keeping up the great work out there! Thanks, Katie
4.0

The service people listened and responded to our issues in a very professional manner.

Hi [Member Name Removed], Thank you for your review. We appreciate any feedback from our customers! Thanks, Katie
3.0

It went well. On time and got right to work. Some good recommendations were provided to repair the gutters.

Hi [Member Name Removed], Thank you for your review! We appreciate any feedback from our customers and I'm glad to know our guys are keeping up the good work!
5.0

I have about 251 feet of white picket fence; they cleaned it virtually spotless; also blew off roof which was full of pine needles in the valleys; they blew it off and picked up the mess. Some river rock was scattered from beneath the fence, but they apologized and helped pick it up.

Thank you for your review! ! We appreciate all of our customers and we'll continue the to keep up the good work!
5.0

Great...they did a great job for us.

Description of Work
We wanted our gutters cleaned. They came out on time, and did a great job of cleaning the gutters for us. There were a lot of leaves and they got them out and we are in good shape for another year.

Thanks Mr. [Member Name Removed] we love getting great reviews.
5.0

The all clear team did a thorough job on clearing leaves and debris from our gutters . They were responsive and kept us advised of dates for service even when a snowstorm intervened. They were on time and cleaned up the debris then checked with us to make sure we were satisfied . Would hire again and will use for windows and pressure washing Highly recommended

Thank you Mr. [Member Name Removed] for your review. We love it when customers are happy.
5.0

Thank you Mr. [Member Name Removed], We appreciate your review. We look forward to working with you in the future.
5.0

They did a good job. They were quick and fast.

Description of Work
They cleaned the pine needles off our roof.

We appreciate your review! We love to hear our crews are keeping up the good work!
5.0

I've had them for two years. It's a family owned agency. I want to use them next year with my gutters and leaves also. They're a very good company.

Description of Work
This was for gutter cleaning and cleaning eaves off the roof.

Thank you for your review. We love getting A's
5.0

Were on time did a good job presented themselves very well

Thank you, we love getting good reviews.
4.0

I have used them once. They were fine. They were okay but I would not give them an "A". I don't remember what I paid now because it's been awhile, but I'm sure I thought it was a pretty good price since I had the coupon and I used them. If I thought they were to expensive, I would not have used them. They could of probably done a little bit better job than they did. They came when they was suppose to. I might use them again, I don't know. I don't try to use housecleaning services because I try to do it myself, but if I had to I suppose I would use them again.

Everything looked good. Had issues with the initial service but our concerns were handled promptly and professionally.

Thank you for your review. We appreciate it.
1.0

Do not do business with this company – at least until they have a better run office and some new people out on the job! A few years ago I had a good experience with them but this time it was frustrating from beginning to end. I scheduled them to both clean my windows and clean out my gutters and they gave me a 2-hour time slot on a weekday. When they didn’t show up, I called the office and was told that they were going to be so late that they would need to reschedule me – this time on a Saturday, 2:00 – 4:00. Two young men showed up at 4:15 with excuses and did a very hurried job. A day or so later I realized that they had not done the inside of some high windows. When it rained a few days after the job, I noticed water pouring off the roof of my porch and suspected that the gutters had not been cleaned. A friend crawled out on the roof and cleaned out the gutters that the All Clear crew had missed. I called the All Clear office and reported the problems to Shawna who said they would schedule someone to come and finish the jobs and would let me know when. No one called but I saw evidence a few days later that someone had been out to clean the gutters. No one called about scheduling the windows so I called and was told by Katie that she had been out of the office and Shawna was new. Lots and lots of excuses and apologies. She scheduled someone to come out and finish the windows but once again, they not show up when scheduled! I called Katie and spoke with her father who actually owns the business. Eventually, I got my windows cleaned and found out that the reason the person did not come out when scheduled was confusion caused by Katie leaving a “sticky note” on the invoice that was overlooked. I will say that Brandon who eventually came out and finished the window job was very professional and did a good job. He even changed the batteries in my remotely run window shades and investigated a problem that I had with one of my gutters. Never again!

Description of Work
Windows cleaned and gutters cleaned out

Dear [Member Name Removed] We are very sorry for your experience. That is not how we typically handle things. I won't try to offer any excuses. We screwed up and are very sorry. I wish that you would give us another chance.
5.0

Excellent! Nick and Elijah arrived early and were courteous and professional. They did an excellent job and clean up. They also gave me estimates for power washing and window cleaning which I an interested in. Would definitely recommend.

Hi Mr. [Member Name Removed], Thank you very much for your review! I am very happy to hear the guys did a great job for you! We always love to get any feedback that [Member Information Removed] we can make sure are guys are staying on top of what is expected of them. Thanks again and you have a great day.
5.0

We are happy with the job they are doing.