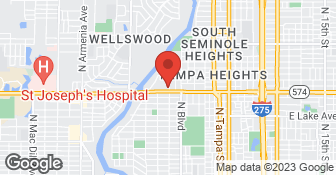 Ultimate Pavers is at the forefront of the paving stone industry we are certified by ICPI,NCMA and we are members of the ICPI both national and local Florida Chapter....

"Certified" Master Craftsman, Ed Fernandez, tried to cheat me on materials and installed inadequate drainage I contracted with Ed Fernandez, owner of Ultimate Pavers, to install a paver patio at my home in October, 2014. I've waited several months so that I could be as fair as possible in my review - I was very angry with him immediately after the patio was completed. Ed's business was on a list of preferred vendors at Old Castle on Bush Blvd. - they manufacture pavers. I did exhaustive research on paver patios. I spoke with an expert who has worked in the business for 25 years, talked with at least ten local paver installation companies and finally secured 3 written estimates that fit within the price range I was considering. Ed was personally my least favorite of the people I interviewed. He struck me as smug and a bit slimy. He is very proud of his status as a "master craftsman". But in the final analysis, he rated best of the reputable companies. He works very hard to come off like a law-abiding boy scout. And I notice his website claims that he is a Christian and therefore honest. Ha! The team arrived on time and on the date we agreed. Ed never worked at my house, only his staff. He did a good job supervising the initial set up - measuring and leveling to ensure proper drainage. I was at this point confidant I was in good hands. As the work progressed, I noticed the "weeping" ports, or drainage I had asked for wasn't according to my expectations. At this point the retaining wall had been built. When I pointed out the drainage was not as I wanted it - about 2-3 inches - he passed it off as no big deal and said most customers didn't like large spaces. I didn't want to make a fuss, but three months later if I don't occasionally take a wire to the 1/4 weeping ports, the water backs up. If he had done as I asked, I wouldn't have standing water. And possibly the most disgusting part of the entire experience with Ed and Ultimate Pavers was the attempt to cheat me on materials. Ed over-ordered pavers - an entire pallet - about $350 worth. Everyone I talked to at Old Castle agreed this was highly unusual to have this much in left over material. And finally, when Ed's workers put the sand on the new patio to fill the seams, they used the cheap sand instead of the expensive polymeric sand I'd paid for. He tried to pretend I didn't know what I was talking about. I had to become very angry and email pictures of the sand to staff at Old Castle before he agreed to come back and apply the correct sand.

Finest Outdoor Lighting Company in Southwest Florida! Professional Landscape & Architectural Lighting - Specializing in Low Volatge LED, Lifetime Warranty Products & Installations. While other homes are disappearing into the night your home will come to life as a showpiece of design sensibility. We understand your home is more than just a residence to you. It should be a visual masterpiece that friends, neighbors, even passerby’s can’t help but stop and take notice. All of our custom designed systems are the result of a personal collaboration with each individual client. You have your own specific style and taste. We are here to ensure your lighting system will reflect this. You hire us not for the lights, but for our expertise in design, our expertise in LED lighting, our professionalism in installation and the long term support and care for our clients. Fully licensed & insured.  …

Showtime construction's goal is to wow each and every customer. Provide maximum return on each dollar used to beautify their property. Our goals is to provide exceptional value and great service. We guarantee your satisfaction and we won’t leave until the job is done right. We pride ourselves on the quality work we provide, while delivering great customer service! Check out our services offered and call or click to schedule a free estimate today. It's Showtime! 813-947-3015 813-600-9198  …

Ultimate Pavers Inc is currently rated 1 overall out of 5.

No, Ultimate Pavers Inc does not offer eco-friendly accreditations.

No, Ultimate Pavers Inc does not offer a senior discount.