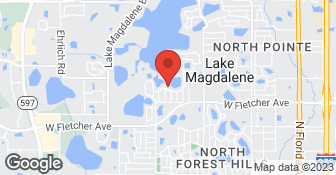 Islander Building Services is a family owned state licensed building contractor working in the Tampa Bay area for twenty two years. We have been your friendly neighborhood contractor specializing in decks, porches, outdoor living since 1996. Please feel free to call to for a free estimate. We are happy to work with all budgets....

I absolutely loved having Islander make my turning my backyard Covid project into an real life Oasis! From pavers, fencing, redecking, and some interior remodeling work, Islander’s workers were in and out in no time. Andy and his son Andrew were effective with communication and incredibly thorough from preliminary drawings to final walkthrough. I’m very pleased with our new masterpiece and am happy to use them again when the time comes. -Thanks again! SW

It's very difficult to get construction done, in Florida.

It didn't go anywhere. I took time off work for them to come out. No one showed up, called the office which gave me an excuse. Then rescheduled for that Friday, owner (?) came out took measurements. When I mentioned the added room was a washer room, he stated they would just demo it. When I asked what would I do with the appliances & hot water heater, he said they would run the pipes under the deck. So no mention of adding the room back on. Said he would call me with an estimate the beginning of the week. Being 4th July weekend I waited for a week for the estimate. Called Andy (owner ?) and he said it must be on the computer, he'll send when he gets back to the office. Never received the estimate, I emailed the company no response. For a company that has been in business for 26 year and supposedly has five stars, not sure how. I don't find them very professional. If they didn't want to do the job, they just should of said so. I would never ever recommend this company to anyone. They aren't even worth one star !!!!

Description of Work
Replacing my deck

Sorry you never received the estimate but I did send it. Check your spam folder sometimes I lose emails in this folder. Let me know if there is anything else I can do?
5.0

Andy and his team were great to work with every step of the way. Professional, thorough and very accommodating when I requested a couple of modifications from the original design. Andy was very good about keeping me updated on progress before the work started and made sure I was completely satisfied, regularly checking in during construction. Couldn't be more pleased with the end result. Great company to work with.

[Member Name Removed] Thanks for the great review. I hope you and your family enjoy the new deck for many years to come. I will forward the message to the crew. Thanks again.
5.0

Andy did a great job working on the deck. He was easy to work with and his crew was on time and on budget. Would definitely recommend and hire Islander again

[Member Name Removed], Thanks for recommending IslanderBuilding Services. It was a pleasure to work with you. Thanks Andy
5.0

Islander building was really a pleasure to work with! Andy worked with us on our deck design that complimented our backyard but maximized the space. Their communication was so prompt and clear, and they actually stayed true to their word (unheard of!). Andy even worked extra hours on the job to ensure our deck was ready for a grilling gathering we had planned. Love the end result and a great experience overall. I definitely would use them again and recommend them to everyone! If you're looking for a reliable and honest company that will work tirelessly to make you happy and get the job done right, look no further. Islander is what you need. Thanks again for the great job done and all of the help! -SW

Andy was great. The crew was clean and professional and we love the new deck.

After the initial snafu of no response, it went very well. The company worked around unforeseen problems that arose and completed the job efficiently. The new deck looks great, glad to have the composite decking. Am already having them quote another job.

Description of Work
Removal and rebuild of old deck with replacement of beams for the house.

Description of Work
They provided brick paving and drainage work.

Islander Building Services is currently rated 4.9 overall out of 5.

No, Islander Building Services does not offer eco-friendly accreditations.