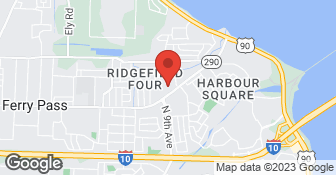 American Garage Door installs and repairs commercial and residential garage doors and openers. We offer free estimates. Our installers are experienced and professional. Always polite, courteous and on time. We show up the day we say we are coming. We do the job right the first time. Our installers are experienced and are not some kid on commission

Arrived on time, very professional, got the work done quickly as I was on a tight schedule.

[Member Name Removed], thank you for the "A" review. We appreciate your business and we are glad that you loved our service. Our company values put customer service satisfaction as a top priority and we are committed to our customers. Thanks again.
1.0

Came via home warranty referral. Not covered by home warranty through Old Republic! Immediately started trashing the door as is trying to upsell me but agreed to repair it. Against my better judgement he came back the next day with parts for spring replacement. Later found out charges were double the going rate and the job was a hack. When my other door also had broken spring with different service co.

Great! Installer was on time. cleaned up the site,hauled off the old door and i am happy!! theBOSS(my wife)is too!!!

Beware of this company. It unprofessionally quotes one price but charges a higher price at completion of work and charges for unauthorized additional work the pad their billing. I called this company twice on Dec 15 and got quotes to repair the broken cable on my garage door opener. The price quoted both times was $125 for all parts and labor for cable replacement. I set up an appointment for Dec 18. The technician Johnathan Padgett did a quick and reasonable job, but kept hard selling for additional work at additional cost. When I told him I could only afford the cable replacement at the moment, but he continued to hard sell for additional services. After completion of cable replacemen, he now charged me $145 stating there must have been a miscommunication and that was his price for services, Plus an additional $49. He stated this was for a garage door tune up (checking bolts and spraying lubricant on moving parts) and additional labor to close the door. This was not something I authorized and indicated I was trying to keep bill down. The quoted $125 bill was now $194. He gave me the impression he could do nothing about the bill. I signed the invoice and paid the bill with intent of contacting the main office after he left about the bill. When calling the main office the office staff confirmed the cost of cable repairs was $125, and the bill adjustment would have to be taken care of by the technician Jonathan. When questioning the bill with Johathan now that he had been paid, his attitude went from polite to rude and uncooperative. He insisted his higher price for cable repair was justified and he kept changing his reasoning for the $49 additional fee. He insisted I had signed the invoice and paid and there was nothing he could do about over-charging me and charging for unauthorized services because I signed the invoice after work was completed. I told him he left me no choice to stop payment on the check and report his unprofessional billing practices to the Better Business Bureau and Angies List. At this time he became threatening and even more rude, but was trying to negotiate something in order to keep me from reporting him to the mentioned agencies. We negotiated a lower price and he would come by Dec 19, but in the end Jonathan did not honor the new agreement He called me on Dec 22 and told me that they had deposited my check which he told me he would not do and was sending a check for the difference that day. It is Dec 31 and still no check for difference. I was forced to have the BBB and Angie's list to negotiate for me. A check for $44 was sent to me as payment of part of what I was over charged. i accepted this as I felt it was the best I could do with this company. It was postmarked Jan 4 the day after I filed a complaint with Angie's List The check was back dated to Dec 22. They stated they did not mail the check earlier because they did not know my name to put on the check. But they did have my address and phone number. American Garage Door generically and their technician Jonathan Padgett specifically should be avoided like the plague.

We appreciate you taking the time to write a review. We take a delicate interest in the professionalism of our work. We apologize for the inconvenience and as a result, our team has been working diligently to look into these matters and take action where needed to achieve the level of excellence you deserve. sincerely, American Garage Door.
5.0

Even though the company is located about 90 miles away, it does make service calls in my area. It was very easy to obtain a timely appointment. This was terrific as the garage door could not be opened. When the technician would be there toward the end of the 2 hour period, I was called and advised of this. It was a little frustrating at first to obtain a general estimate in order to evaluate whether the Angie's Paypal advance payment coupon would be worthwhile. The technician was efficient and explained to the person at home what he was doing. I spoke with the company today to arrange payment and several coupons/discounts were used by it. I would recommend this company for garage door repairs and will call it again should we need further services.

Description of Work
The spring was broken. It was replaced along along with work done on both drums.

Thank you for your review!! We proudly serve the gulf coast region. We have techs located in areas along the coast and are able to quickly respond to your service needs. We appreciate you taking the time to review our company.
1.0

Person came out. Said your builder put in wrong door . 6yr old. You need while new door approximately 1150.00 gave 550.00 deposit. On day of delivery and install was supposed to pay 600.00 more. They sent a subcontractor to install. He told us we got ripped off. Said we did not need new door. Said only about 200.00 in repair. American door was mad. Did not pay the 600.00 now waiting to be reimbursed 350.00 of my deposit.

We appreciate you taking the time to write a review. We take a delicate interest in the professionalism of our work. We apologize for the inconvenience and as a result, our team has been working diligently to look into these matters and take action where needed to achieve the level of excellence you deserve. sincerely, American Garage Door.

At Crimsafe, we believe there should be no compromise when it comes to the safety of you and your family. Security and Storms Screens are window and door coverings that are proven to withstand all unwanted forces. From burglary, pests, and severe storms. Crimsafe Screens can protect from it all. Our stainless steel security and storm screens are manufactured in La Mirada but we operate through a network of dealers who would be happy to give you a free quote. Contact us today and we can help you get started and get the strongest home defense on your property.  …

American Garage Door is currently rated 3.2 overall out of 5.

No, American Garage Door does not offer eco-friendly accreditations.