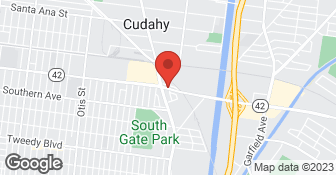 The technician Richard was very knowledgeable and thorough. Treatment went exactly as explained and the results have been excellent. Service also included a follow up treatment. Highly recommend!

The staff was friendly, courteous and on time. Services rendered and no termites seen after. Willing to come back if termites swarms are visible to retreat.

Smart, helpful, knew exactly what they were doing, totally thorough, never missed anything - and best of all problem gone!

Description of Work
What a relief - no more rats!

After I signed up is when things went south with this company. The spray they did was completely ineffective. In fact, I've never seen so many big, beautiful, healthy spider's on my property as I did the week following this initial spraying. (I spoke to Susan about it and she made it sound like I was to expect this- which sounded valid the way she explained it, but come on- not one dead bug? Dozens more happy and healthy and BIGGER? Right. ). We needed to schedule a follow up to spray the interior which is a whole big deal- I was suppose to pull everything up out of the cupboards in the kitchen, and then go through each room in the house and pull away everything from the walls- and as much off the floor as possible. FYI- other places will take care of this for you. The second red light went off when I needed to push back the time for this second visit- I tried calling three or four times over a few days and it was radio silence. I had three different numbers for them, but they all went to the same voice mail- and it took repeated messages, escalating towards obvious concern and irritation for them to call me back. Finally, the morning of the big indoor treatment came, we had about five minutes of rain, and I sort of started to wonder if that would hinder our progress at all- but it's primarily an indoor treatment so why should it? A little while later, Michael called confirming the treatment and giving the go ahead for preparations. Preparations took HOURS by myself and my husband while we juggled kids and soccer and the busy family life, but literally after hours our end of the job was complete and the house has been successfully packed and ready to move out. We're talking four bedrooms and a really crowded playden- it was a big deal. Then came the hour that these guys were suppose to show up. Ten, twenty minutes rolled by waiting and I tried calling this number to nowhere, only to leave a voicemail wondering if they could find our place okay. No response. Another thirty minutes later and I'm very annoyed- I didn't mention they also asked us to be out of the house for 6 hours after the treatment was done, so I'm getting concerned about how long my kids will last that evening, etc. Finally it occurs to me to check my voicemail (becuase we went to soccer that morning as well) and there is a messages from Susan saying they can't make it because of the rain, and could we please reschedule for next week. I literally fell over. The time on this message is TWO HOURS AFTER I spoke to Michael, and three hours after this five minutes of rain which wouldn't have affected us anyway because we were working indoors! Plus, she had my cell number- she absolutely should have kept trying both numbers until she got hold of me in person if they couldn't make it- and if they were going to use the rain as an excuse, they shouldn't have called AFTER it rained and confirmed that they were coming!!! I'm still dumbstruck by these people. So I called back again and left a message saying I got they're message- our place is totally dry and upside down, and if they could still come by today I would appreciate it because we can't just pack up and do this to our house again the next weekend. Again, radio silence. Anyway, long story a little shorter (sorry, but you should know this story), I tried them a few more times- gradually getting to the point of letting them know if they didn't get back to me I would call someone more reliable. And this small business who was so eager to gain a few more clients still didn't get back to me. I was finito. So I left them another message telling them to tear up my contract, cancelled my card, and called Orkin. Do not use Pest Solutions, they're sweet and professional until they get you to sign and then they'll get to you whenever they feel like it. I've never dealt with a more unprofessional and unreliable company in my life. And now I get to spend the next week putting the house back together. There it is- good luck!

Description of Work
Michael, the owner, said they were a small business trying to get more customers so they were waiving the consultation fee. I figured it would be nice to give them the business- he sounded nice and professional, so I scheduled the appointment. They came out for initial consultation and to spray the exterior. Consultation went well, I was impressed with how punctual, professional, and knowledgable Susan was. She even had a handy little dvd on termites on her to educate the clients. So I signed up for a year's contract!

My name is Michael Marquez owner of Pest Solutions, I did waive the initial service of $275.00 to obtain a new quarterly customer as a promotion that I am offering, which is going great. First of all this customer was not prepared on our first initial service inside the kitchen, we only treated outside. I did call the customer saturday morning at 8:00 am to confirm we would be there at 3:00 pm to treat the kitchen, at 10:00 am it started to rain, Susan had my technician stand by for 20 minutes it continued to rain so she made the decision to bring the techs in, she did call all the customers that day to reschedule they all understood and she rescheduled service. Susan did call member at her home phone, we do not have her cell phone and left a message we would have to reschedule due to the rain. We will gladly refund this customer $95.00 and wish her well. Pest Solutions has been in business going on eight years November 15, 2010 and take pride that our customers our satisfied 100%.
5.0

IT'S GREAT. I'M STILL THERE. I CUT TERMINEX LOOSE. I DIDN'T LIKE THEM. I LIKE THESE PEOPLE. I'M WITH THEM EVERY WEEK, AND EVERY MONTH. I LIKE THE QUALITY OF WORK. I HAVEN'T HAD A PROBLEM. TO ME, THAT'S PROFESSIONAL.

Description of Work
THEY SPRAY THE HOUSE OUTSIDE. THEY SPRAY FOR FLEAS, CRICKETS, AND BUGS.

Pacific Coast Termite was formed in 2007 by Co-Owners Dennis Wilson and James Grande. The Company was started in Tustin California, and has expanded to cover the entire state. During this time the company has grown each and every year, propelling Pacific Coast Termite to one of the top termite and pest control Company's in the Nation. We built this company with the goal of helping Californians eliminate termite problems without going through the inconveniences of tent fumigation. Pacific Coast Termite has successfully treated over 20,000 homes, businesses, and commercial properties throughout California. By using Orange Oil and other similar products while our customers stayed home.  …