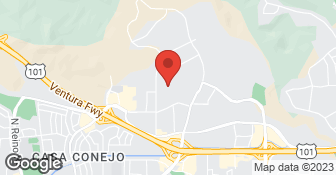 Lloyd’s Plumbing is a fully licensed, bonded and insured service and repair plumbing contractor. We are a third generation family-owned business and have been working in our community and the surrounding areas for over 45 years. Our list of clients includes thousands of residential customers – many of them Lloyd’s Plumbing loyal for three generations. We also work for many city and municipal agencies, school districts, housing authorites and hundreds of businesses, restaurants and shopping malls. Feel free to visit our website for more information www.lloydsplumbing.net...

Without hesitation, I'd say that Lloyd's Plumbing are the best plumbers in our area. They are well-organized, courteous, professional, on time, and on budget. I cannot recommend them more highly than I do.

While working on the clog, the serviceman accidentally caused a leak under the sink. They were going to come back in 4 days, way too long, and charge us $125 to fix it! We declined and fixed it ourselves.

I've had several companies come out to replace the thermostat in the past, but they never told me why it was happening. Lloyd's told me I had the water heater set too high, which was burning up the thermostat. He adjusted the temperature and it has resolved the issue.

Description of Work
They replaced the thermostat on my water heater.

These gals/guys are over the top with their expertise, commitment to great work at a fare price and being simply....nice to work with! Sorry, my mindset is Andy Griffith, Mayberry RFD---this team is molded after this American staple. You won't be disappointed with Lloyd's!!

With a solid Angie's List rating, I called these guys for a backflow preventer leak. The dispatcher said they had a technician who was already in the area and would be right over. An hour later they called back to say he was delayed, but would still arrive soon. When he did, he spent less than 10 minutes fixing the leak, but said he would have to charge a full hour rate. Expecting $80 to $90, I was shocked to see the bill for $140. (To be fair, to help fill up that 10 minutes, and because I was standing there, he also did a pressure check, which had just been done two months prior.) The technician told me he lived down the road, and that I was more or less on his way home. So it wasn't out of his way. I asked and he confirmed that their hourly rate was $140. There was no half-hour rate or senior citizen discount, just $140 per hour, or fraction thereof. I was thinking about using this outfit for my annual pressure checks instead of the random plumbers I have used in the past, but no more. Buyer beware!

Description of Work
Came out to check a leak and provide an estimate.

I knew no one in Westlake Village, CA, when I went there to help my daughter move in. She went to work while I handled "details." The original plumbing problem was on a Sunday, when the shower would not turn off! I made several calls based on the Yellow Pages (I had no computer access yet), and Lloyd's Plumbing agreed to come -- immediately. (Other companies called had excuses or "maybes" or "not for three days." ) A supervisor came, fixed the problem, explained the plumbing system to me, and even helped me make a list of other tradespeople in the area! I felt like he was my longtime friend and neighbor. He was polite, professional, intelligent, quick, and delightful. I learned a lot about various plumbing brands. And the dogs liked him! Later in the week, the sinks sprang leaks and other problems occurred. He fixed them with the same professionalism, discovered that the complex's water pressure was too high (saving them a fortune from more potential leaks), notified the HOA, coordinated THAT repair, and was a godsend. And all at a fair price. (I do not recall the dollar amounts.) He even called the condo owner to explain what was going on. It turns out Lloyd's works with housing developments and businesses, as well as homeowners. That expertise helped us immensely in being able to relay the problem to management when it turned out to be more than the proverbial leaky faucet. I am 73 years old and have dealt with a lot of repair and other people in that time, most good, some not so good. I say wholeheartedly that Lloyd's is the best ever, in my book. They turn plumbing into an art. Here is a picture of the world's best plumber, and no, we are not related:

Description of Work
I live in Tucson but was helping my daughter relocate from Chicago to a townhouse in Westlake Village, CA. The bathtub would not turn off. It was Sunday! Lloyd's fixed the problem at a reasonable charge. Later visits were required within a week to hook up a new frig, and fix leaks in three sinks -- This building's plumbing was a mess! He also discovered that the complex's water pressure was too high and called the HOA/management company for me! This saved my daughter and others from flooding, as well as saving the HOA an expensive repair. Then he came back at the condo's owner's request and repaired/replaced parts in other plumbing that was installed improperly.

I got estimated prices over the phone for the camera study from three different plumbers and chose Lloyd's because they were the lowest. They were half of what the highest one wanted and a little less than the the other one. My house suffered water damage from a chronically blocked toilet and I wanted to make sure there was no debris in the my pipes. The plumber showed up on time and the whole thing took about half an hour. The plumber plugged my flash drive into his equipment so I got my own recording of the video at no extra charge. It was a fairly simple job, and it went well.

Description of Work
Lloyd's put a video camera down my toilet pipe all the way to the main sewer outlet.

They are really good, very professional! I think they are wonderful.

Description of Work
I use them regularly. They installed shower head most recently and also replaced a sink. Miscellaneous jobs for me and both big and small jobs for my friend!

Ted came on time, and did a great job and charged me one third of the price I was quoted by the plumber my home warranty company wanted us to use.

We would prefer a call or text for the fastest service. Thank you!!! **Please call and text Pat at 323.314.7837 if you're interested in service. He answers all inquiries very quickly.** Specializing in all aspects of rain gutters and rain gutter maintenance, Bresnahan Rain Gutter Cleaning has valuable experience dealing with common rain gutter problems, such as unwanted water drips, standing water, water that overshoots the gutters, gutters that pull loose from the roof and debris trapped in gutters. We offer a wide range of gutter services, such as aluminum gutter installation, custom gutter installation, gutter cleaning, gutter maintenance and gutter repair and top-notch Commercial rain gutter cleaning. We also provide window washing and window cleaning services. Additional website: https://cleanraingutter.com/ For fastest scheduling please call or text Pat at (323) 314-7837.  …

Home Pro Green Remodeling is a family owned general contractor company specializing in kitchen and bathroom remodels. With 20 years of experience, we pride ourselves on our unbeatable quality, customer service, and prices. Our mission is to make your dream house come to life.  …

Family owned and operated, KN remodeling is dedicated to the highest customer satisfaction, providing quality home improvement while giving you best value for your money. How? By meeting our goals of personal trust, professional management and quality workmanship in a timely manner. Thanks to a super team of planner and designers, we have what it takes to bring your project from concept to completion in a fashion that insures the in quality, durability and beauty.  …

We offer services for drain cleaning (sewer and area drains), sewer camera inspections, water heater repair and new installations, kitchen and bath remodeling, all water line repairs interior and exterior (irrigation, slab leaks, and main water service), gas line repair and new installations, and many more! You can always give one of our office personal a call and ask about any other services that we might be able to help you with.

How is Lloyd's Plumbing overall rated?

Lloyd's Plumbing is currently rated 4.6 overall out of 5.

What days are Lloyd's Plumbing open?

No, Lloyd's Plumbing does not offer free project estimates.

No, Lloyd's Plumbing does not offer a senior discount.

Are warranties offered by Lloyd's Plumbing?

What services does Lloyd's Plumbing offer?

Lloyd's Plumbing offers the following services: We offer services for drain cleaning (sewer and area drains), sewer camera inspections, water heater repair and new installations, kitchen and bath remodeling, all water line repairs interior and exterior (irrigation, slab leaks, and main water service), gas line repair and new installations, and many more! You can always give one of our office personal a call and ask about any other services that we might be able to help you with.

Are there any services Lloyd's Plumbing does not offer?