Is Your Landscape Lighting Polluting the Environment?

Avoid nuisance lighting and glare that bothers neighbors and interferes with the night sky view.

Many homeowners turn to professional outdoor lighting designers to showcase their trees, homes and yards with nighttime illumination. But a good designer works to light the yard as efficiently as possible while minimizing the effects of glare and light intrusion on the street, neighboring properties and the night sky.

Such indiscriminate use of light, known as light pollution, can cause any number of problems, ranging from angry neighbors to upsetting the balance of nature. So, responsible landscape lighting designers work hard to use light efficiently, avoid wasting light and prevent nuisance lighting. When hiring a landscape lighting designer, homeowners should make sure their methods avoid causing light pollution.

Advocates of reducing light pollution focus on increased skyglow (an increased brightness of the night sky) and light trespass (when unwanted light intrudes onto other properties, such as your lights glaring into a neighbor's yard.)

Marlin Bennett, owner of Outdoor Lighting Perspectives in Birmingham, Alabama, says his clients frequently say they want to be good neighbors when they install a new lighting system.

“Nobody wants to come home one night and see that their neighbor has put in outdoor lighting that’s pointing at their own house,” Bennett says. “That’s the biggest consideration with light pollution for neighbors. You won’t want the customer to be blinded or the neighbor to be blinded. The solution is to be wise in where you place fixtures and how you direct them.”

He notes that sound lighting design from the start helps to avoid these problems.

“The best design of an outdoor lighting system is one where you don’t see the fixture and you can’t see the light source unless you walk right up to it,” he says.

How to Use Solar Lights in Landscaping: 6 Bright Ideas

When the sun goes down, let your yard light up

Mark Heinzman, owner of Heinzman Lights at Night in Fishers, Indiana, says paying attention to detail plays a big role. “If you’re lighting up a tree, sometimes that means angling a light toward a neighbor’s house,” he says. “So you want to be sure the tree is thick enough that light won’t filter through and end up in the neighbor’s eyes.”

He says his clients rarely bring up concerns about nuisance lighting or light pollution, so he works to educate them about finding a balance.

“Landscape lighting works for three things: Aesthetics, safety and security,” he says. “Back in the ’90s and early 2000s, people were still using floodlights for security purposes, but it’s a very harsh light that will take away any aesthetic effect. You can place lights around the edge of the house that will still identify intruders without that harsh light.” 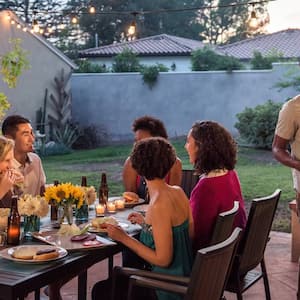 How to Troubleshoot the Most Common Landscape Lighting Issues

Widespread indiscriminate use of light causes more than just annoyed neighbors. Across the nation, excessive amounts of light significantly brighten the night, causing stars to be rendered invisible to the human eye and disrupting the rhythm of nature. And it’s not just an urban phenomenon. According to the National Park Service, skyglow from cities can be observed from parks more than 200 miles away.

Many local municipalities, particularly on the East and West coasts, have introduced ordinances to reduce glare, light trespass and skyglow.

“It’s a creative process, based on a lot of trial and error and knowing what looks good and what doesn't,” Fisher says.

Fisher lights yards with “moon lighting,” which is supposed to replicate the feeling of bright moonlight shining down, illuminating a yard and walkways. “We’ll place them in an inconspicuous location in a tree where you don’t see the light or the fixture, just the light coming down,” he says. “It’s very subtle, using energy efficient low-voltage LEDs, and won’t interfere with a neighbor’s view.”

Fisher says he aims lights directly at homes and tree lights close to the trees. “The light stays directly on the house and doesn't create any ambient light shining anywhere else,” he says. “There’s no chance they’ll shine in the customer’s window, let alone a neighbor. Our tree lights shine straight up the tree and into the canopy. It’s very subtle, with nothing broad and bright to disturb the neighbors.”

Editor's note: This is an updated version of an article originally posted on Jan. 31, 2014.