How Much Does It Cost to Replace a Chimney?

Nothing makes a home feel cozier than a fire on cool nights. But it’s important to make sure the fireplace and chimney are in good working order before piling up the logs and setting them aflame.

Whether your chimney is old and worn or it has cracks and extensive damage, there are many reasons you may want to replace a chimney. An average chimney replacement costs $1,000 to $3,000, while taller chimneys of 10 feet or more may cost more than $5,000 to replace.

The size of the project can vary based on whether you are replacing part of the chimney or opting for a complete rebuild. Keep in mind that the cost to replace a chimney can increase for taller chimneys of 10 feet or more.

A full chimney removal and replacement costs more than $5,000, and extensive rebuilding projects can cost upward of $15,000. You’ll need a full replacement for extensive damage, such as a leaning or crumbling chimney.

A partial chimney rebuild costs about $1,000 to $4,000. This type of reconstruction may include rebuilding the stack from the roofline upward.

You may need to extend your chimney for better ventilation or to meet building codes, which will cost about $1,000 to $3,000.

Chimney replacements are a dangerous job that often requires a structural engineer and a masonry expert. Expect to spend about $500 for a structural engineer, plus $50 to $75 an hour for masonry work. If you remove an old chimney, a demolition crew will cost around $50 per worker per hour.

How Much Does It Cost to Replace a Chimney Yourself?

Improperly built chimneys can cause fire risks, and there is a danger of the chimney collapsing during a removal or a rebuild. Even if you’ve had luck with some risky DIY projects in the past, this is one project you don’t want to take a chance on. Instead, hire a local mason to ensure the chimney is built safely.

What Factors Influence the Cost to Replace a Chimney?

Whether you need to freshen up the mortar of your chimney or replace the chimney stack or crown, many factors can impact the cost of replacing a chimney.

You may need a permit to replace a chimney, especially for removing the old chimney. Permits will cost about $20 to $150, depending on your location.

Repointing and tuckpointing can help restore mortar in a chimney. 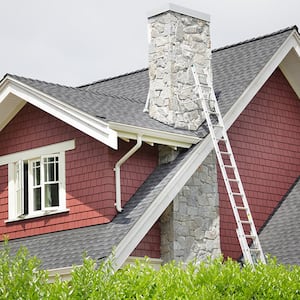 Chimney crowns and caps protect the chimney and flue from water damage. If the crown or the cap becomes cracked or damaged, you’ll need to replace them. Replacing a cap is about $150 to $200, while chimney crown replacement costs between $1,800 and $3,000.

The chimney stack is the part of the chimney that extends past the roofline. You can partially rebuild the stack for $150 per linear foot, but if you need to remove the old chimney stack first, removal will add $1,000 to $2,000 to the cost. 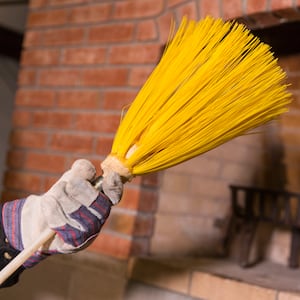 There's nothing better than an evening by the fire, but have you ever wondered what's hiding in your chimney?

How do I know when my chimney needs to be replaced?

If your chimney is crumbling or deteriorating, leaning, or leaking, it may need to be replaced. Chimneys that are not structurally sound pose collapse or fire risks, so it’s essential to have a chimney regularly inspected to determine if it needs to be repaired or replaced.

Should I repair or replace my chimney?

It’s safest to replace old chimneys. The mortar typically lasts about 25 to 30 years, while a chimney crown can last up to 75 years. You should have your chimney inspected regularly to ensure its viability. Plan to have a chimney sweep at least once a year, and a chimney sweep costs about $250.

Your budget can also determine whether to repair or replace a chimney. If you have minor repairs, you might hire a chimney repair specialist to save money compared to replacing the entire chimney. But if your chimney needs several major repairs, the best investment may be to replace the chimney.

If your chimney has been damaged by tornadoes, lightning strikes, storms, or a fire, then homeowners insurance will likely cover a chimney replacement. However, damage caused by high winds or earthquakes may not be covered, and insurance doesn’t usually cover replacements for old or worn chimneys.