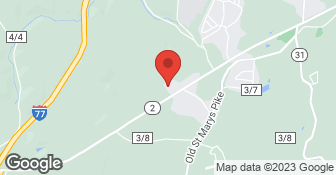 Fair job with appearance, initially did not complete the job as requested / paid for and was way, way overpriced.

Description of Work
An appointment was made. He called 30 minutes before appointment time & said he was held up. He asked me to text photos to him and he would get back to me. I texted photos that day. That was Tuesday 8/4, I have heard nothing since.

We contracted company to schedule estimate on landscaping work at our home. Lady scheduled for the following day before noon. After noon the owner called and stated that he was going to be late. Waited all day and nonone ever showed up and have not returned any of our calls since. I have heard that other people have had this same issue with this company.

The initial work was good but once a couple plants died he refused to return calls even though he provided a year warranty on the plants. I gave him 5 weeks. I called three times but he didn't even bother making a phone call.

Description of Work
Landscaped the front of our house.

My experience with Casey's Landscaping started off well enough. After calling about an estimate for a patio project, a representative for Casey's was at the house within a day or two. We talked ballpark estimates which were very attractive. Upon leaving, I was told by the representative they would look at their schedule and let me know when they could work me in. After not receiving a call back for a week I called Casey's Landscaping to see if any progress had been made. The receptionist took down my information and said I would receive a call back shortly. I waited another week before calling again to try and understand what was going on. Once again, my information was taken down and I was told I would receive a call back. Weeks later I still have not received that phone call. Casey's Landscaping is just another unprofessional contractor that doesn't know how to pick up the phone. Save yourself the hassle and choose one of the other landscaping contractors in town.

Mr. Casey's men were very competent and professional. They did a really great job in 90 degree plus weather, and stayed with the job until it was completed. The price was a little high, I thought, but overall a good job.

The work was done on a timely basis and with a good degree of professionalism. I'm pleased with the new driveway and the relocated fence and AC and the retaining wall blocks that were reset. I'm not happy about the fact that one of the subcontractor employees stepped out of the concrete and onto a paver sidewalk (that leads from the driveway to the front door) and deposited concrete onto about 25 or 30 brick pavers. I'm guessing that a quick application of water might have taken the concrete off the pavers but for whatever reason that didn't happen. Nor did Casey or the subcontractor say anything to me about it. I didn't realize until a week or so later what had happened and that it was irreversible at that point. I notified Casey and he came and looked at it right away and said he would take care of it. Three months later and numerous phone calls later and I'm still waiting on him to make it right. If he does, I'll immediately change this report. But until then I'm not very happy. It took another month or so ... I had to continue to hound him but he finally replaced the damaged pavers. The replacement pavers are not a close match to the rest but he said it was the best he could do.

Description of Work
Removed old concrete driveway (approx. 20' x 30') with a thin layer of blacktop to put in a larger driveway (approx. 20' x 42'). Project also included relocating our AC unit and moving and reinstalling about 35' of privacy fence to accomodate the larger driveway. Casey employed two subcontractors for the project: one to relocate the AC and another to do the concrete pour/finishing. He also reset some adjacent blocks in a retaining wall where settling had occurred.

Description of Work
We called Casey's for R&R of a retaining wall. He came and we agreed on a price based on his estimated material and labor cost for a 50' long wall. Work to begin a week and a half later and last for 3 days. Arrived in just 4 days unannounced. Casey said he was able to start ahead of schedule. I wasn't pleased for neither my wife nor I would be able to continuously monitor their progress. At 10:30am checked and found they were not placing the wall correctly. I told them it should be semi-circular on a 30' rad. I checked again at 3:30pm as they were getting ready to leave and asked if they were done for the day. I was told the work was totally finished. It had only taken one day but the wall was only 40' not 50'. Casey arrived and gave me an invoice 5% higher than the original quote! He did accept the original amount as payment in full. Result? The wall is NOT on a 30' rad. (the reason for it's replacement) and few of the pre-existing plants , and no soil, was saved for use elsewhere.

They did a good job. It was fair priced. They were in and out. they were on time and I didn't have an issues with them. I didn't have to worry about standing over top of them to make sure they didn't steal anything or anything like that. They made me feel very comfortable. They were trustworthy.

Description of Work
I use them for landscaping.

I spent $3700 on that job. They were recommended by other people who had work done. It was difficult to find companies to do this work.

Description of Work
I used Casey’s Lawn Care in late August last year for repair the drive way after the pump was put in and replaced pavers.