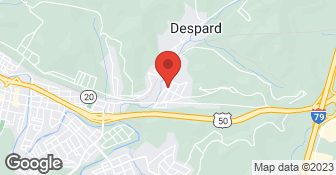 26 EMPLOYEES. COST IS DETERMINED BY THE JOB. TRAVEL CHARGES MAY APPLY. SERVICE FEES MAY APPLY. EXTRA CHARGE FOR AFTER HOURS SERVICE MAY APPLY. LICENSE #: WV008410....

We can take care of all of your construction needs.  …

**We're still OPEN and ready to help you 24/7 during the COVID-19 crisis! Please call us today, and we'll be sure to use every safety precaution available. Don't be stuck with a broken HVAC system during this time, we're here to help!** Customer Satisfaction is our #1 Priority. We have 35 years experience in heating and air conditioning. We offer Spring and Fall Tune up/Check up specials.  …

It Didn't!! The job is still not done. I have not been Contacted. And I now have 2 pipes in my basement which are starting to drip.

.It was at no cost, because they were correcting a mistake they were fixing.

After they 2 contractors left, there was an odor of gas, not a good situation. I called the office, who advised me that they were on their way to another job and would not be able to come out until the following day. My husband mixed up the soap water to check for leaks and tightened the pipes. Natural gas leaking into a home is not a good situation.

Estimate to run a gas line to my stove. The room is about 14x14 and the main line is under the same floor. I got one estimate and I bought it was high,, so I called Graham Simon. What a disappointment their estimate was 612.00, and approx 50.00 was parts the rest was labor. They even said they were going to just run straight black pipe which is the cheapest way to do it. The estimate is more than I paid for the stove and I question why would it take 8 hours to run at best 14 feet of pipe.

I do not have any problems with them. Usually, I schedule something with them, they come out, take care of it, clean up after they are done, and then they leave. Their price is not bad.

Description of Work
I used Graham-Simon Plumbing. I used them quite a bit. They did basic plumbing work for me like proper lines things like that.

Tree roots had closed off my sewer line. They replaced the line fixing the problem. All has been working well now for 3 years.

Description of Work
Installed a new sewer line around a tree

Had water backing up into the basement from the house to the septic. Called Rotor Rooter, said they couldn't run a snake down the line because the line was too thin, wanted to dig, by hand, approximately 3 feet down to put a clean out close to the house, also told me that the septic was full. Called a septic service and had the tank cleaned, advised me after they cleaned the tank that no water was coming out into the tank. Possible blockage or broken line. Called Graham-Simon, plumbers came the same day, found a blockage by snaking the line and saw the broken line when they used the camera. When they were here, I asked them to look at the copper plumbing, since the house is 46 years old, some of the copper had deteriorated, Kevin agreed with me that it would be a good idea to have the lines replaced. They came quickly when first called, diagnosed the problem, a week later they came on a Monday to start the project staying until 6:00pm so the bathroom could be completed. Tuesday finished the job, even planting grass seed and straw where the yard had to be dug approximately 20 feet long 5-6 feet deep. Very satisfied with the work that was completed by Kevin and Chase.

Description of Work
Replaced a clogged and broken line from house to septic tank and replaced all copper drains to pvc per my request.

They first tried to help by seeing if the problem could be fixed close to house, but in the end the yard needed dug up just to find the break, fortunately they then were able to redirect the line so my deck was not involved saving me another sum in the end.

Description of Work
New water line, which needed to be redirected,

The plumbing was great; I loved them. They were efficient. It has reduced my gas cost; it is great. I would recommend them because they were very professional; from the guy that came out to give me an estimate to the people who called me in the office to make sure I got everything and to the guys who actually did the work. It only took them two days. They were very polite, cleaned up after themselves, and were very fast. Price was actually very good and they were here when they told me they would be here. I am going to have them do another job.

Description of Work
I used Simon & Graham for plumbing. They installed a tank-less hot water heater; we took out the tank and put in new one that just heats water that comes into the house.

The work was OK. The quality was just OK, certainly not great but merely acceptable. My biggest issue was how they completely engulfed my house in fumes and concrete dust from their improper use of a non-water saw when cutting up my basement floor. It was absolutely terrible. Add to that the shoddy quality of the other work, and the end result is that I will not have these guys back again.