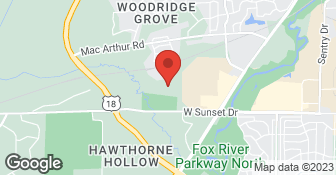 For over 40 years, local homes and business have turned to us for award-winning landscape and design. Our friendly, family-owned and managed Milwaukee and Waukesha landscape company prides itself on designing unique, beautiful landscapes that add beauty and value. Trust our team of landscaping artists to bring your residential or commercial property to life with inspired designs that will transform how your property looks and feels....

at first there was some miscommunication between the sales rep and the guys. I hastily put in a review that I shouldn't have. Sarah called me when she saw the review and rightfully told me I should have contacted her and voiced all my concerns and they would have made it right. I voiced my concerns then and she bent over backwards to get the guys back out immediately to address the issues. they even went above and beyond adding a little extra to make my yard and border around the tree look very nice. I'm very happy with the work and I apologize to Sarah and the guys for my hasty review. I would definitely have them back again in the future if I need work done. by the way, it was a very busy time of year and all of the outdoor service Industries had a heavy backlog because of all the rain we had in the spring. I work in the service industry myself and know that when everyone has a full plate these little miscommunications happen, it's just the way of the world. they did a great job and went out of their way for me. Now I have to give Angie's List a bad review for making it impossible to go back and edit this paragraph, at least on my cell phone here

Description of Work
entire front yard removed, graded and seeded, Picket removed with large boulder put in place. mulch apron around tree and some miscellaneous filling in the backyard.

They were an awful company. I filed a complaint in the Better Business Bureau. They gave me a refund. They were rude to deal and they insisted that it wasn’t their fault when it obviously was. They were just the most horrible company to deal with. I wasn’t the first person to file a complaint. They had sent me an email and I had proof they were lying. They have been doing me for a couple of years and last year they missed an area that was self-contained. The rest of the lawn came up grass the frontal area started coming up weeds. I called them and they said they never missed an area. They said they will have to charge if I wanted it re-done. I contacted the owner and he said we don’t have to come out, we know what weeds look like, and then he denied it. I had to choose the Better Business and I had to choose something and I said ok a refund but they refused that and kept saying how I lied. It was ugly and awful. It was the most awful company to deal with. The guy that came out was nice and they would not admit that they missed an area. It was dealing with the owner that was awful.

SHE CALLED AT 12:35 AND ASKED IF I WANTED TO RECHEDULE THE APPOINTMENT SINCE IT WAS RAINING. I TOLD HER IT WAS NOT RAINING IN OAK CREEK. sHE SAID SHE WAS ON HER WAY. AT 1:25 I CALLED AND ASKED WHERE WAS SHE AND ARE YOU PEOPLE USUALLY LATE. PERSON SAID NO, BUT I WILL CONTACT HER. A SNOTTY FEMALE GOT ON THE PHONE AND SAID SHE RAN INTO RAIN. WHEN I ASKED IF SHE SHOULD HAVE LEFT EARLIER SHE SAID SHE DID. IT DOES NOT TAKE AN HOUR TO GET TO OAK CREEK FROM WAUKESHA EVEN IN THE RAIN. TOLD THEM TO CANCEL SINCE THEY WERE VERY, SNOTTY AND UNRELIABLE

Description of Work
THE PROVIDER WAS SUPPOSE TO GIVE ME AN ESTIMATE AT 1:00 ON THUR THE 11TH OF JUNE. HER NAME WAS SARAH WHO WAS GIVING THE ESTIMATE

Sarah gave a courtesy call to [Member name removed], because it was raining quite hard and most clients do not want to walk around in their yard while it is raining. She remarked it was not raining there, so Sarah told her OK, great and she was on the way. [Member name removed] called back wondering when she would get there. We told her we would get a hold of Sarah and we called Sarah on the 2-way radio, she said she was three minutes away. We told [Member name removed] it was slow traveling due to the heavy rain and accidents. She said Sarah should have accounted for that and left earlier. That is why Sarah called to let her know she was on the way. There was not much more we could have done.
5.0

We have contracted Central Services for two years, our lawn looks good -- have been VERY satisfied. They also did landscaping for us and did a great job. We would recommend them highly!

They were excellent. We would use them in the future for sure. They exceeded our expectations. They were expensive but they were right in line with all the other quotes that we were given.

Description of Work
We used Central Services for landscaping. They built a retaining wall.

They are very good. I would use them again

Gary had been out twice reviewing the project scope and patio design. He is always friendly and very professional. He is also very willing to produce a project in phases, for budgetary reasons. The final project plans are not yet complete.

Description of Work
Currently working with Gary on landscape design for back patio and also drainage issues around the home.

We have a three quarter acre lot and it was a mess. I had hurt my back and wasn't able to rake or do any cleanup. I called and got a quote for Fall cleanup. I like they gave me a flat rate for our lot size. Two English speaking workers (I feel this is an important detail) came fully equipped to do the job. They parked their trucks on the street and put out traffic cones. They wore uniforms and were very professional. They did the job as I would have done it. They handpicked all the branches and shrub clippings off the lawn, under trees and garden beds. They cleaned up the entire property, not just the lawn. They worked in tandem, were very efficient and didn't miss a stick or leaf that I could find. They did everything I asked and I feel I got excellent value for my money. When they were done, they asked me how it looked and we took a walk around the property together. In the front, there were some fallen limbs hidden under a pine tree and they took care of it immediately. They were very professional, efficient and thorough. They started around 8 a.m. and finished about 3 p.m. I plan to use this company again in the coming Spring.

Description of Work
Fall clean up which included fallen branches, leaves and what I had left behind after trimming shrubs and trees.

We specialize in landscaping, lawn care, hardscaping, retaining walls, pavers, patios, and more! We guarantee your satisfaction and we won’t leave until the job is done right. We pride ourselves on the quality work we provide, while delivering great customer service! Check out all the services we offer below and call -- or-- click to schedule a free estimate today!  …

I have been in the industry for almost 8 years now but I have only owned my own business for almost three years. We offer competitive pricing and are a fully licensed and insured business right out of the lake country area.  …

Our crew has the expertise and equipment for pruning jobs big and small. The equipment, experience, and knowledge of our team of arborists is second to none. Service matters... Hoppe Tree Service has won the Angies List Super Service Award for 18 years in a row from 2001-2018! Get a jump on your trees for this spring season. Contact us to have a certified arborist evaluate your trees! Whether it is pruning or removal work, or staying ahead of insect and diesase pests before it becomes too late. Our crew can help.  …

Central Services Co Inc is currently rated 4.6 overall out of 5.

No, Central Services Co Inc does not offer warranties.