With Angi since October 2003

Snow Removal
Fireplaces
Stone and Gravel
Masonry
Leaf Removal
Lawn Fertilization & Treatment
Lawn Irrigation
Concrete Driveways
Concrete Pouring and Repair
Licensing
All statements concerning insurance, licenses, and bonds are informational only, and are self-reported. Since insurance, licenses and bonds can expire and can be cancelled, homeowners should always check such information for themselves. To find more licensing information for your state, visit our Find Licensing Requirements page.
Business Details 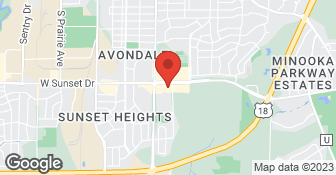 Additional phone - (262) 544-9414. Additional contact name - John Lossman. Badgerland Lawn and Landscaping was established in 1997 by a young entrepreneur with a pickup truck and a wheelbarrow. After working for a number of local Waukesha landscaping companies by day and attending evening classes in the landscape horticulture program at MATC, a vision of a landscaping company was in the works....

Juniors Enhancements LLC is a landscaping company of people that share the same enthusiasm and work hard to exceed your expectations.

At Malbork Construction we pride ourselves on being the masonry contractor that you can trust and the team that will treat you like family. Operating in Wisconsin and Illinois, our experienced team is devoted to providing you with top quality service. We believe in bringing your vision to life and making every project experience stress free. Call us today for a FREE ESTIMATE!

John came to my house and took a lot of time listening to my needs for my yard. I was told he would get me a plan. I followed up 3 weeks later and was told the plan would be ready the next day, 2 weeks later I followed up again with no response. I called and left 2 additional messages, again with no response. Very disappointed in the lack of response following the initial meeting.

I drive by their office on a regular basis, so when I needed some landscape work done, I decided to call. I should have checked the reviews here first before wasting my time. Like others have said, their follow up is non-existent. I called them for a quote and Chris came out within a couple of days. We talked about the landscaping/grading project and he took measurements and was going to email me ...

The company delayed the project last Fall and it was not completed until October. The drainage issue was not fixed entirely and the landscaping was poor quality. Their customer service is poor as they do not return phone calls or emails. To date the job has not been completed to our satisfaction and the company is still not returning our calls or emails.

DESCRIPTION OF WORK
Repair drainage issues in back and front yard. Repair landscape.

I contacted Badgerland for a quote to bury my sump pump since it was destroying my landscaping. I was able to get an appointment with John roughly a month later. After waiting a month for my appointment, John did not show up. An hour after my appointment time, I finally called the office to ensure someone was still coming & was told John was extremely busy & was likely running behind but they assu...

I found John's consulting and ideas for my project very helpful. I obtained 5 bids. Badgerland price was competitive. Happy with the quality of work and cleanup. My only knock would be that the project was delayed twice and communication was more reactive than proactive. Would recommend and hire again.

General Information
Free Estimates
No
Emergency Service
No
Warranties
No