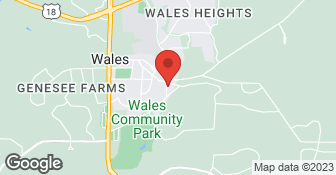 Local Plumber I use could not respond in timely manner due to other business so I call Guthrie and they were able to come out promptly. so far so good. Thanks

Thorough job in replacing the tank with a better product.

Thorough job in replacing the old tank with a superior product.

Jesse was friendly, very knowledgable and explained all the parts and how it worked. Scheduling was fast and convenient. The woman I scheduled with was also very informative and gave tips on things to watch for. Replacement was made during same visit and only took 2 hours. He also pointed out additional plumbing work I should have serviced by plumber. Bill was slightly less than initial quote. Overall great experience.

We had low water pressure , which meant it could have been the pump , or the iron curtain filtration . Zac was prompt, and quickly diagnosed the problem which thankfully was the iron curtain which was overdue for a clean . Whilst here he upgraded the pressure gauge, and added a reset switch . $99, for service call and $55 for parts . Good value .

We live in the country and they replaced the well tank. They are responsive. They came out the same day that we called. They are highly knowledgeable and professional. Their prices are reasonable. The secretary in the office is very knowledgeable and friendly. It is a family owned business.

Description of Work
We use Guthrie & Frey, Inc. for quarterly chlorination of our well.

I shut off the pump so as not to burn it out. A worker came and checked out the pump which was in working order, although old. He checked the well, which is quite shallow at 25 feet. I think I may have left a hose running on plants too long and so the well did not have time to re-charge. The fellow who came was courteous and did a very through job. he also tossed some cholorine tablets into my well for me which I very much appreciated.

Description of Work
I have a well and suddenly one night the pump kept running and the water stopped flowing. I called and made an appointment for the following day.

They were very responsive within a day or two days like that. They were very practical, safe and really cared about my pocket book. So they fixed everything efficiently, promptly and safely. If I have a well problem, they are the only people I would call.

Description of Work
I have a well pump outside, the pump that runs from the well inside the house and this is just used for outdoor watering not drinking water, that had a whole and so it was draining in my basement. So I just shut that off and called them. They literally had to lift the outdoor well and pulled it tight.

Serviceman was punctual and professional. Did all work to completion. Cleaned up any mess afterward. Knows his trade very well.

Description of Work
Installed a pressure tank for use in my water well system. Also put new associated piping in.

Guthrie & Frey was amazing in getting us on their schedule after the memorial day weekend. Our well pump went out just before a major re-landscaping of our yard. While the landscpers were here they found the wiring issue and we called Guthrie and Frey on Tuesday. They came out that next day and evaluated our system with the diagnosis we needed a new pump and some new wiring. Two men from Guthrie & Frey came out to replace our well pump on Thursday and we were up and running with water on Friday! On Friday we got a letter from the City of Wauwatosa that our well needed to be inspected and that we needed to submit paperwork for the well inspection including a water sample. I immediately called Guthrie and Frey to see if they could do this for us. They sent Walt out again to get the water sample and returned the water sample DNR paperwork to us (but no inspection report). I assumed that submission of the well pump replacement and the DNR report would be sufficient for the city of Wauwatosa (I am just the homeowner, not the well expert).A few weeks later, we then got a call from Tracy informing us that the city of Wauwatosa had called her and that we were missing our DNR 3300-221 form. It would be another $95 for them to come out and complete the form for us. With the already $2000 + we spent, I asked if she could talk to Lynn Frey to determine if they would be willing to come back and not charge us or at least split the charge with us. Tracy called again the next day and said she looked into it and it wouldn't be $95 but actually $150 to complete the paperwork. ($100 of that is travel reimbursement...). My frustration is that due to a misunderstanding (I thought we were getting a well inspection/water sample) and them thinking they were only doing the well replacement, they were unable to do anything regarding customer service. Due to the 45% increase in cost from1 day to the next, and the lack of collaboration on a two sided misunderstanding, we went with another company to complete the well inspection (for 18% less than Guthrie & Frey).

Aqua Well & Pump Systems, Inc., is a 3rd generation; family owned & operated, well and pump service company, serving all of Southeastern Wisconsin. Our mission at Aqua is to provide our customers with a safe, reliable water supply, while safe guarding & promoting the protection of our most precious resource. To accomplish this mission, Aqua is dedicated to investing in promotion, equipment, & most of all people who share the same core values of knowledge, integrity, hard work, & honesty. Aqua provides pump & well drilling service for residential, industrial, commercial, & farm applications. services.  …

We are a family owned and operated company.  …

Insured
All statements concerning insurance, licenses, and bonds are informational only, and are self-reported. Since insurance, licenses and bonds can expire and can be cancelled, homeowners should always check such information for themselves.To find more licensing information for your state, visit our Find Licensing Requirements page.
General Information
Free Estimates
Ask for Details
Eco-Friendly Accreditations
No
Payment Options
Check, Visa, MasterCard, Discover
Senior Discount
No
Emergency Service
Yes
Warranties
Ask for details

GUTHRIE & FREY INC/GUTHRIE INC is currently rated 4.7 overall out of 5.

No, GUTHRIE & FREY INC/GUTHRIE INC does not offer eco-friendly accreditations.

No, GUTHRIE & FREY INC/GUTHRIE INC does not offer a senior discount.

No, GUTHRIE & FREY INC/GUTHRIE INC does not offer warranties.