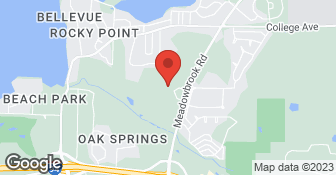 Kienbaum Excavating And Septic LLC. is the only company you need to contact if you need a septic system. We do it all, from the initial soil test to the complete instalation of the system all the way to the final seeding and mulching of the site. John Kienbaum Jr. (the owner of the business) will be onsite every step of they way ensuring things are done right. Making the installation as worry free as possible for the home owner....

Very cost competitive and nice to work with. He took care of all the details, was efficient, clean, prompt, and thorough.

John Kienbaum came over and analyzed the problem of a damp basement wall as a broken sewer pipe outside the basement wall. He confirmed this by removing the clean out plug and probing the pipe. He then gave me an estimate for the work and sent me a proposal and price via the internet. His price was quite a bit higher than his competitors but John sounded more knowledgable about how to fix the problem and clean up after the repair. After some discussion and an adjustment on the proposed price, I agreed to accept his offer, even though it was still more expensive than his competitors. The next day John and 2 helpers showed up on time and began working. He used a smaller version of a backhoe that minimized the damage to the lawn and landscaping getting to the backside of the house and the septic system. They cleared away a large path of bark chips so they would have room to place the dirt they dug up. They dug up the old pipe, found where it was leaking next to the basement wall, sawed it off, removed the pipe going through the wall, and connected a new piece of PVC piping from the existing connection inside the house to the septic tank. After cementing up all exposed surfaces they backfilled the hole, packed the dirt down to prevent the dirt from settling later, and spread the bark chips back over the area. They even saved several large stones that I wanted to use for landscaping. John and his crew were very friendly and gladly answered any questions that I had. In all they took about 3 hours to fix the problem. I waited for a while to write this review because I wanted to be sure that no leaks would occur after the installation. I would highly recommend John because of his careful attention to detail and his pride in leaving the area looking as untouched as possible after the work.

Back in 2012 my 48-year-old septic system failed. In the previous few years several systems of like vintage on my street had failed and needed replacement. But you tend to be optimistic that you?ll get another year or two out of your system. Then kablooey. It just can?t get the job done and you need a replacement. This can be a pretty scary event financially. Chances are, that unless you buy a new house or a high-end luxury car, this may be the most expensive thing you will ever purchase. You have a million questions and this is something that Google may help with, but it won?t necessarily give you the answers for your state, town, or particular situation. You have to rely on trust. My long-time pumping service, Sunset Septic, did what they could, but it wasn?t as simple as clearing a clogged line. The guys did, however, give me some leads on who to approach about a repair (if possible) or construction of a new system. I contacted John Kienbaum of Kienbaum Excavating & Septic and he investigated. What they discovered was a failed system that was not built (two owners ago, back, in 1962) correctly. Did I mention my septic tank was under my garage? I guess the 60s were the wild west. Anyway, they did several soil tests, measured the size of my lot (which had a pretty good down hill slope to it), and concluded I needed a mound system, versus an enhancement of the old-style. My first concern was being able to physically fit it on the lot (there were a lot of mature trees that would have probably added $3,000 for removal to the final bill). Second was cost. The economy isn?t exactly humming along for everyone and it wasn?t something I wanted to use a home equity loan on, so there was a pretty fixed ?no more than? price I could afford. Third was preservation of as many trees as possible. Hey, I like trees, and only one of three smaller Spruces I transplanted didn?t make it). We came up with a pretty good plan to attack the problem. An outside engineer examined the property and designed the system to fit the tight spaces and downward angle. Before the target date Mr. Kienbaum measured and re-measured the property lines with a GPS system, and identified where the system could be installed. He also did some chainsaw work where needed. John also designed the re-routing of the interior piping to run out to the new tank (running through the old tank, in the garage, wasn?t really a sound option). Once the battlefield was prepared, we agreed upon a start date. Note: He gave us time to remove as much of our garden as we could for transplantation. Due to the downward slope of the yard, compounded by the north slope of the mound, would make it unsafe to mow. This, then, provided plenty of space to transplant the day lilies and cone plants and let the flowers take over. Once the heavy equipment arrived, what impressed me most was that basically, two men built the system, from digging up the yard, spreading the sand, installing the pipes, and delivery of the tank (another vender hoisted it into place). From start to finish, it took three days, and if memory serves, the new system was usable midday on the third day (there was just a modest window when water couldn?t be used) The last half of the third day was largely cleanup work, grading, filling in and sealing the old tank, and putting down grass seed and hay. When I asked him how long between pumping?s (I had been pumping every 18 months), he told me three years and that the system would have at least a 50 year service life. I resolved to write a review after the first pumping to flag any concerns. It turns out Waukesha County sends you a card to remind you about the three-year pumping and system inspection. (When you start to receive postcards offering to pump and inspect your system from firms you may never have heard of, that is a clue the date is near). I can say that I have had no problems with the system and the check by Sunset Septic confirmed that all was well with the tank and the pump. I am still a happy camper. In the end, John listened to our concerns, and delivered a quality mound system within our target dollar amount. Should you find yourself in a pickle, and needing a new septic system (or major repairs on an older system) I highly recommend using his service.

We've never dealt with septic systems prior to buying our home, so we were the definition of clueless, with the exception of getting it pumped out once a year. Though the job was not an easy one, John efficiently and expertly diagnosed - and fixed what could immediately be addressed (pumping, outlet baffle) the many issues our system faced and for a fair price. In fact, he didn't charge us beyond his initial estimate even though it ended up taking an hour longer than expected.

Description of Work
Bathroom flooded due to septic issues spring 2012

He came out the same day that I called and was very friendly and explained to us what had to be done. He came back the next day as promised and replaced the pipe and reseeded the lawn per our agreement, however the lawn is very uneven with large dips and valleys in it and now I have to get a load of dirt to fill in these holes and reseed that area. I feel that it was a waste of money to pay him for something I have to redo. I will still give him an A for the pipe work but a C for his backfill work.

Description of Work
Replaced pipe from septic tank to the distribution box.

Thank you for the review. The focus of my work is always the plumbing issue, I offer seeding and mulching as a convenience to the customer. However there will almost always be some settling occurring after a short time. Usually just some minor reseeding will be necessary.
5.0

John Kienbaum himself came immediately when I called for an estimate. He also was able to do soil testing, made the best recommendations, moved some of our fruit trees and with extra effort was able to handle some difficulties with ease. Very friendly and kind on top of it all.

Zietlow Excavating is a new young, ambitious company looking to make its mark on the excavating world. No job is too small for us to take on. Expect for there to be quick, timely, and quality work performed no matter the job.  …

Family ran and locally owned company, specializing in all your land management needs, including excavation, exterior piping, land clearing, demolition, and more! We guarantee your satisfaction, and we won’t leave until the job is done right. We pride ourselves on the quality work we provide, while delivering great customer service! Check out all the services we offer below and call -or- click to schedule a free estimate today!  …

Insured
All statements concerning insurance, licenses, and bonds are informational only, and are self-reported. Since insurance, licenses and bonds can expire and can be cancelled, homeowners should always check such information for themselves.To find more licensing information for your state, visit our Find Licensing Requirements page.
General Information
Free Estimates
Yes
Eco-Friendly Accreditations
Yes
Payment Options
Check, Visa, MasterCard
Senior Discount
No
Warranties
Ask for details

we don't pump out septic tanks for routine maintenence, But if there is a problem we will co-ordinate the pump out if needed to address the situation properly.

Kienbaum Excavating & Septic LLC is currently rated 4.9 overall out of 5.

No, Kienbaum Excavating & Septic LLC does not offer a senior discount.

No, Kienbaum Excavating & Septic LLC does not offer warranties.

Are there any services Kienbaum Excavating & Septic LLC does not offer?

we don't pump out septic tanks for routine maintenence, But if there is a problem we will co-ordinate the pump out if needed to address the situation properly.