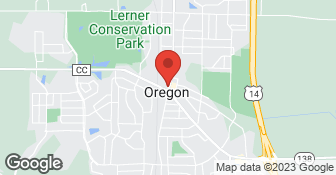 We can design your dream outdoor space. We can supply a realistic layout of your backyard plans on our computer. Call to make an appointment 608-835-2780 or stop by the store.

This company damaged my yard while installing a pool for my neighbor. They entered my property without permission and caused significant damage to my yard as the ground was very wet when they decided to start the project and got the crane stuck. They then proceeded to dump several dump truck loads of gravel onto my yard to try to get the crane out, again all without my permission. The "grass" they planted was almost all weeds and when I tried contacting them simply to request treating my yard to eliminate the weeds, they refused to talk to me. The receptionist is very rude and kept saying "what do you want us to do about it?" She repeatedly refused to allow me to talk to the owner until I threatened to sue them or report to BBB. At that point, the owner said they would come by within a couple of days to assess and treat the yard and never showed up so I ended up reporting them. Terrible company. I got nothing but attitude from them and they clearly don't care about the quality of work they leave behind or customer satisfaction.

Description of Work
Had no work done. My yard was damaged by this company while installing a pool for a neighbor.

Punctuality and timeliness of service was a consistent and serious problem. They said they lost some employees during the summer, so perhaps that explains it. They know what they're doing, so I would consider hiring them again if they could promise timely service.

Description of Work
They serviced our pool for the summer.

Outstanding. I have used Rec Con since I moved in to this home. It is my first home with a pool so I was a little overwhelmed. Jeff, (owner) is incredibly knowledgeable and was and is willing to share his expertise when ever I have a question or am trying something new. The staff in the store including those that do the billing/paperwork are friendly, knowledgeable not looking to sell me something I don't need. Nothing less than pure professionalism. Jeremy, the service technician is truly a " subject matter expert" and taught me pretty much everything I know about pools . so much so that I rarely see him anymore as I am able to do most tasks myself now. I could go on and on about details of every visit and service call but that would be redundant. bottom line is, if you need a new pool, or service or supplies for your current pool, you will be well served to give Rec Con a call. You WILL be pleased.

Description of Work
Continually provides service above and beyond expectations

Description of Work
Built a small deck on the second floor, actually it was an extensive repair. Very sturdy.

Recreational Concepts was going to call back when they could send a technician out to check out the problem. I received no call, however, the next day a pool truck was in the yard. Jeremy reviewed the situation and, almost immediately, noted a hole about the size of a quarter in the lining. I got out my "patch" kit, but he went out to his truck and got the professional adhesive and a patch. He was here about 20-30 minutes and patched the hole. He told me what to watch for and to finish filling the pool. I asked about fees, he said that this would be billed as an hourly stop. --hourly rates were around $85 or $90 I noted that the winter cover was still on (due to the leak, didn't see a good reason to remove it yet.). He said if I didn't loose water, I should contact the office and schedule time for him to come out he'd do that. But to call either way. Again, this would be billed as hourly. I watch the water level over the weekend; before I called them, he called back to see if everything was OK. I stated it was. He set up time and came back out to complete the opening.That took about 30 minutes to remove the winter cover and install a new solar blanket. I was expecting to be billed for about an hour or so for both calls. Was a bit surprised that my (1st) bill was for almost $105+tax and was listed as Service Call -- patched liner. I called and the office told me that a service call is $95, the patch was $10. Given the one bill, I assumed Jeremy had combined the two calls. Then in September I received another bill for the winter cover removal and solar blanket for $90 + tax. I rate the service excellent, but the billing inconsistent--just not sure what you'll get charged.

Description of Work
I contacted this company and told them I believed I had a leak in the pool (inground) plumbing. Another company had been unable to find it.

Description of Work
The only thing we didn't like was that when the deck was stained, a latex brand was used, vs. an oil based stain, which is peeling off. We now have to have the deck sanded & re-stained. |

Winner of the 2014, 2016 and 2017 Angie's List Super Service Award, Greenscapes LLC has established a reputation as a leader in commercial and residential landscape design, construction, and maintenance in the Greater Madison Area. As a full-service landscape company, we are a one-stop shop for all your landscaping and snow removal needs. Our knowledge, attention to detail and personalized customer service, ensures that our customers’ needs are met and services are delivered in a timely manner.  …

Daniel's Landscaping specializes in commercial and residental law mowing for propertiesss of any shape and sizes. we will use the appropriate eqipment to provied the groomed,finshed,look you expect with stright mowing lines, string trimmingarounf all tree, fences, siding,ect. and blowing grass clipping out of all plant beds, tree ring and off paved surface.we can also provide services for while you are on vacation  …

At Hanke Landscaping and Snow Removal our belief is that our customers needs are the utmost importance. Our team with 10+ years experience is committed to meeting those needs. We welcome the opportunity to earn your trust and deliver you the best service. No job is to big or to small, please contact us for a free estimate!  …

Insured
All statements concerning insurance, licenses, and bonds are informational only, and are self-reported. Since insurance, licenses and bonds can expire and can be cancelled, homeowners should always check such information for themselves.To find more licensing information for your state, visit our Find Licensing Requirements page.
General Information
Free Estimates
Ask for Details
Eco-Friendly Accreditations
Yes
Payment Options
Check, Visa, MasterCard, Discover
Senior Discount
No
Warranties
Ask for details

How is Recreational Concepts overall rated?

Recreational Concepts is currently rated 4.7 overall out of 5.

What days are Recreational Concepts open?

No, Recreational Concepts does not offer a senior discount.

Are warranties offered by Recreational Concepts?

No, Recreational Concepts does not offer warranties.

What services does Recreational Concepts offer?