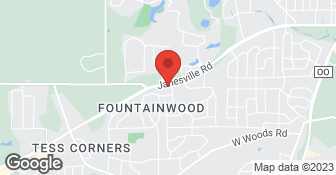 Family owned and operated, award winning remodeling firm, Callen Construction was founded by Tom Callen and Phil Callen in 1986. A few years later they expanded into interior remodeling at the request of their customers introducing Kitchens & Baths by Callen, and opened an award-winning showroom. Since then, they have been improving the homes of their friends and neighbors throughout southeastern Wisconsin. "We are proud of the many long term relationships that have been fostered with our remodeling customers. Our goal is to ensure the continuity of good relations over the life of our customers’ homes." says Phil Callen. "It is our personal pledge that when you select Callen for your remodeling investment, we will give you a quality project you will enjoy for many, many years."...

After my review, the project director did contact me and indicate the windows would be ready the week of Thanksgiving. Much longer than the original 2-3 weeks but with covid, I understood things may be slower. We set up the installation for 12-9 and 12-10. On 12-9, by 9am, I hadn't heard anything and called to check. The project manager called back at 9:30 to say he had left me a message rescheduling due to problems on a job, so it was moved to 12-10 and 12-11. I had no message or call from him. The installers did arrive on 12-10 but again, no work was being done so I asked if the windows were too big. They said yes. So, waited for project manager to come again, he was indicating the windows would fit but it sounded like fitting a square peg into a round hole and covering the problems with trim. I asked a retired window installer next door to come listen to the explanation and he agreed, it would be better to have windows that fit. I was told new windows could be ordered and ready the first full week of January. Having already waited 6 weeks for these windows, I asked for the money back. I used 40 hours of vacation already with no windows. The project director did contact me later that day and make arrangements to come show me why the current windows would fit. He came out, took off some trim and explained that the new windows were not inserts, they were full frame and the old 3/4 inch frame on all sides would be removed. This was the plan with the original installer but he wasn't available that day. So, arrangements were made to get the original installer back on 12-14 and 12-15. I had to have another family member there for it since I couldn't take any more time off work. I will say the windows went in, they look nice and seem very weathertight. The installers did a great job putting them in and cleaning up. They did indicate there would be some reimbursement for the time off . I will say the project manager really seemed unable to manage even a small job.

Thank you for bringing this to our attention. Per conversations with Callen's production department we had to re-order your windows back in October and have recently confirmed the new delivery & installation date. (continued conversation is off-line)
2.0

We were planning on doing a remodel with a complete demo on our bathroom (home built in1897 with some upgrades over the years but not up to code) We had a consultation meeting with Callen (one at their show room and then another at our home so they could see the bathroom) and they guaranteed us that our project would be about $35,000 (we explained we wanted tiled flooring and all new fixtures and the room gutted, and there may be issued behind the walls) We worked with a designer who was semi helpful, but always showed up late for all of our appointments smelling like cigarettes (very unprofessional). She was helpful by showing us new stores to go look at for tile, fixtures, and flooring but really did not help us many any decisions. "Its up to you its your bathroom" she kept telling us when we asked her opinion. She also kept pushing materials on us that we did not want like laminate for floor, when we clearly said we wanted tile from the start. Then when she presents us with the contract for the project was then going to be 53,000 which is way over budget and we still would have to pay extra for any problems they found behind the walls! When we asked for an itemized list broken down on exact costs and how they got to that number they refused to show it to us. We called and sent multiple emails asking for the itemized list, but they refused to release it. Overall paid $400 for an ok design who really just showed us some new stores so that is the only positive I have from this company.

Thank you for bringing this to our attention. We're sorry to hear there were circumstances of tardiness, we at Callen strive to provide the best service, including being prompt to all customer meetings. Your comment is a great reminder to us to consistently better our customer service skills. We have been in touch off-line and hope our continued conversation will address all of your concerns.
4.0

It took a while to get on the schedule to have the work done. They had some turnover with the sales reps so I ended up speaking to 3 different people before the work could get scheduled. They did feel bad and did apologize. I was told the work would be 2 days but it end up being done in 1 day which was great. The gentleman I spoke to the day the work was done was very professional and able to answer all my questions. I would hire them again.

Thank you for sharing the experience you had with Callen on Angie'[Member Information Removed] List . And thank you for understanding the sales rep turnover we experienced during your project. We sincerely appreciate your review and truly value your business.
1.0

No one from Callen Construction ever called.

Hi [Member Name Removed] - I'm sorry you did not receive our message. We did reach out to you through Angie's List with the following information to your inquiry on wood windows. "Thank you for your interest in Callen. Regarding your inquiry we install Marvin's Infinity Fiberglass replacement windows. They are stainable like wood but much stronger and durable. Check them out here: [Information Removed] We will be in touch shorty.
4.0

They did everything as expected. Nothing exceptional, but nothing back. I would recommend this company.

Thank you for sharing the experience you had with Callen on Angie's List . We sincerely appreciate your review and truly value your business.
5.0

From beginning to end, our experience with Callen was a positive one. Marie, our designer, was wonderful to work with and had very helpful suggestions with our selections of products. Every work person was respectful of our home and cleaned up every day. This was a fairly large project involving removing closets, expanding bathroom and changing footprint of the shower and bedroom. The project manager called daily to let us know what would be happening the next day. We had a calendar given to us at the beginning of the project and it was adhered to. There was never a day that someone was not here working and it was finished in the the projected timeline. This was a terrific company to work with and we would definitely use them again.

Description of Work
remodel of master bedroom and bath

Thank you for sharing the "A+" experience you had with Callen on Angie's List . We sincerely appreciate your review and truly value your business.
5.0

Everything from start to finish exceeded our expectations.

Thank you for sharing the "A" experience you had with Callen with Angie's List members. We sincerely appreciate your review and truly value your business.
5.0

Thank you for sharing the "A" experience you had with Callen with Angie's List members. We sincerely appreciate your review and truly value your business.
5.0

This is the 3rd project Callen has done at our home. Every time they are prompt, professional, thorough and neat. They offer excellent communication and follow-up.

Thank you for sharing the "A" experience you had with Callen on Angie's List. We appreciate your review and truly value your continued business. We look forward to working with you on your 4th project!
5.0

They did an excellent job. I will definitely recommend them and absolutely use them, again.

Thank you for sharing the "A" experience you had with Callen on Angie's List . We sincerely appreciate your review and truly value your business.

Empire Home Remodeling, Inc specializes in windows, siding, roofing, creativity, customer service and project management necessary for success. Our most satisfied customers are those who want a company to manage their project, leaving the problem solving and details to the professionals, thus allowing them a worry-free experience.  …

Butler chimneys is a full service chimney company. We offer all the quality of the big guys, at a little guy price. We were founded on the principal: "Just because you can charge more doesn't me you should charge more".  …

Callen Construction Inc is currently rated 4.7 overall out of 5.

Are there any services Callen Construction Inc does not offer?