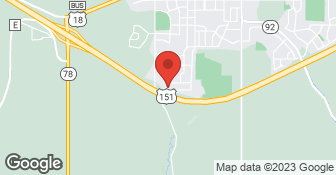 I would hire them again for any project. Clean, on time and exactly what I was promised. Overall a great company to work with if you need a remodel.

Description of Work
Added a tile bath to an existing bathroom

Excellent job. We were very happy with the outcome. It took 3 weeks as was estimated. A large project that we considered for a couple of years. Dennis and Karl arrived on time each day. They first put down protective plastic covering on all floors where they would be. Demolished the entire bathroom. Took about two days to fill up the dumpster there was a lot of plumbing and electric to be cut off and capped. Very Careful to not get dirt or dust in other parts of the house. Each day the bathroom and the workshop they set up in our garage were cleaned up and all tools put away. They worked all day each day. This was a job that was easier to finish from from beginning to end, rather then work on it for only parts of the day. There were visits from building inspectors, HVAC contractors, electrians, plumbers and the mirror company. Dennis was certain to be here when each sub-contractor arrived to work with them. Any concerns, questions or problems that we brought up with Dennis were handled immediately. Changing our mind did not cause any problems except maybe a contract change. I asked Dennis to help with small projects, replacing an outdoor light and replacing a storm door, which did not have anything to do with the Bath contract. He took care of them before the bath project was completed. We moved into our house 13 years ago. Dennis had completed a MAJOR addition to this house about 20 years ago. We did not work with him then but were aware that he had done the work for the previous owner. We were impressed with the quality of the earlier work he had done. That was a factor in our choosing him from other contractors we interviewed. We wanted an accessible Aging-in-Place bathroom and that was accomplished with The sure grip grab bars, comfort height toilet, walk in shower, fold down seat and slip resistant floor tile. I expected to prepare a punchlist at the completion of the job, but I was unable to do so because there were NO unfinished items. Dennis and Karl are pleasant, hard working people that are FUN to work with.

Description of Work
Complete remodel of a full master bath. Removed whirlpool tub, separate shower, vanity, sink , HVAC , raised floor, all tile, lights ,mirror and cut a new opening into wall to open another entry into bath, They built a new walk- in- shower with a custom solid non-slip base and ceramic tile walls, a teak fold down seat, grab bars, shower head and a hand held wand. Replaced the worn door fronts on the custom existing vanity along with a new custom toilet topper. Installed new toilet and new vanity top and faucets. New exhaust fan with motion sensor for variable speeds. New over-head can lights in bath and the shower and new vanity lights. A large new beveled edge mirror.

Description of Work
We had the upstairs bathroom remodeled. They showed up on time and did great work for us as quickly as possible. They replaced some old tiles around the shower with new cement board and tiles. The window in the shower was replaced with a water resistant high quality vinyl window, the vanity and custom top were replaced after the floor was replaced and tiled. A fan was also installed as well as a new toilet and plumbing. They put down tarps before starting and removed the old fixtures as well as repainting the bath after taking off the old wallpaper. They did a good job of cleaning up, and handled a couple of mistakes in ordering quickly and satisfactorily. This is a great company to work with and I would use them again.

My late husband was under foot the entire time and his concerns were addressed and acted on quickly and pleasantly. Since then I have called with questions - not necessarily problems - and I have been listened to and my questions answered right away. The subcontractors have been equally nice during and after construction. I am now dealing with a second generation in three of the companies.

Description of Work
He Built My Entire home and I'm still living in it and enjoying it.

Everything went very smooth and on time as promised. The orgnaizing of the plumers, electricians and constuction was like watching a perfectly orchastrated dance. Everyone in and out in perfect timely precision. Site clean up was done every evening. I just can't say enought good things about Dennis and Karl. We will definately use them again in the future!

Description of Work
We did a complete Kitchen and Separate Pantry remodel. Work included completely gutting the kitchen, opening up the low ceiling to make it cathedral and bringin up the floor to match level of the rest of the house. They also created the trim around the windows and door to match the rest of the house which hadn't been done prior and the work was an exact match.

All work excellent. This contractor is very on time, reliable and provides high quality work.

Description of Work
Painting and replacement of trim woodwork and ceiling beam woodwork on this job. But we've previously used them on several other jobs including repair of a deck, construction of two new decks, and the construction of an entire house.

Outstanding! We have worked with this contractor on many occasions besides this one for all kinds of things besides painting, including home construction, deck construction, carpentry, and repair. We would recommend them to anyone without hesitation. They are first class in all respects including and most importantly professional integrity.

Description of Work
Reconstruction of a ceiling and painting.

Specializing in exterior and interior painting! We guarantee your satisfaction and we won’t leave until the job is done right. We pride ourselves on the quality work we provide, while delivering great customer service! Check out our services offered and call or click to schedule a free estimate today!  …

Insured
All statements concerning insurance, licenses, and bonds are informational only, and are self-reported. Since insurance, licenses and bonds can expire and can be cancelled, homeowners should always check such information for themselves.To find more licensing information for your state, visit our Find Licensing Requirements page.
General Information
Free Estimates
Ask for details
Eco-Friendly Accreditations
No
Payment Options
Check
Senior Discount
No
Warranties
Yes

Badger Home Improvement is currently rated 5 overall out of 5.

No, Badger Home Improvement does not offer free project estimates.

No, Badger Home Improvement does not offer eco-friendly accreditations.

No, Badger Home Improvement does not offer a senior discount.