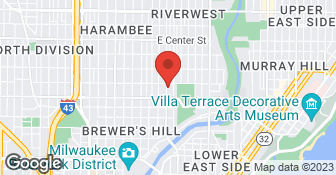 Our vision as a company is that we aim to please every customer. Each person should be able to relax easy during the process for which ever service we provide. Quaility and efficent work ethnic is what we pride ourselves on being able to commit to every contract that we take. The treatmeant of every person we do business with is treated like family....

Sanchez Drywall is a great family owned business growing more and more by the day. We take pride in our work. We care more about quality than quantity. We let our work speak for itself! We offer the best prices in the industry considering the years of knowledge in the trade. With 15 years of experience in commercial and residential work, we can tackle any job given to us!  …

No pressure sales because we know our product and pricing are better than the competition. In addition to our goal of a quality product and competitive pricing, Milwaukee Windows is also able to get you the windows within a short period of time (7-14 days). Milwaukee Windows began as the owner was searching for a quality window manufacturer for his investment properties. Although the big box stores had standard size windows at a reasonable price (for the quality level supplied), custom sizes were cost prohibitive and took a long time to get once ordered. In addition, there wasn't much selection if you wanted a higher quality product. Other window retailers were expensive and slow. After researching different windows and finding a high quality one he liked, he decided to go directly to the manufacturer and negotiate pricing since he had such a high volume of windows he would be ordering. Over the years, friends, fellow investors and contractors began requesting orders. As a result, Milwaukee Windows came to existence.  …

This guy is a scammer. He talks about how much he loves God but he scams people. On June 21st, we gave him an $800 down payment to repair my mom's garage. The only reason I went with this guy was because he repaired the roof on my mom's neighbor house. But they didn't tell me until after we gave him the deposit that he takes forever to complete jobs. If I would have know this beforehand, I wouldn't have used him. He was supposed to repair the structure and install a new roof. He bought material and came one time. I called and texted him, and everytime he said he was coming, he never came. It's now December 13th, and he has not done anything. I called him again and he stated he was picking up more material. Well he never showed up. Don't use this guy. he's a scammer and just takes people money. DO NOT USE HIM EVER!!!!!!

Description of Work
We had Mahdee Dupree (owner) stop out on Sept. 4 2013 to give us an estimate on trimming our large maple tree. After talking to him for about 45 minutes he assured us this was a job his company could handle and he had all the equipment and man power to complete the job. He said he could start on Sept. 11, so we signed a contract and gave him a $100 deposit on a $450 job. Well he did show up at 4:30PM with a pole saw and trimmed 3 little branches which I could have done myself and that he would finish it that weekend. Well, no show and no call that weekend. We did receive a couple of calls after that with promises from him that he didn't forget, he's just busy catching up on other jobs. Every time I tried to contact HIM, his number was no longer in service. The last time he called was in early November with the same promises. Again I tried to contact him on his cell number, no longer in service. Well it is now December 12th and I want my deposit back. I tried again to contact him at all the numbers i could find for his company and no response. I guess it's off to small claims to get my deposit back. DO NOT TRUST MAHDEE HOME IMPROVEMENTS

home improvement Such as: * Roofing *Siding *windows *Gutters * Landscapcing * Electrical work * Cementing & Asphalt * Rebuilding of Pouches * Winter Snow Removal We offer repairs for all kinds of vechicles such as: *major engine works(repairs) *tune-ups *fuel pumps *transmissions *over haul *body work *rebuld most engine/motor/transmissions We move homes from studios to 7 bedroom homes. *will travel from city to city for a move *will have it done in quickest safest manner possible