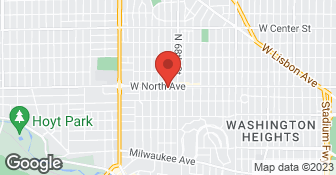 Had a young man come and fix my oven igniter, was very fast and have not needed any additional work in years

I called and gave a part number I wanted to purchase to repair my Kenmore dryer. (I had watched a you-tube video and used that part number). I picked up and paid cash (because if I used a credit card it would cost $3 more dollars) for the part. When I opened up the dryer, I immediately saw that the part was a totally different shape. I thought, good thing I hadn't torn open the package, yet. I then wrote down the exact part number from the starter switch, the part I needed. The next day I called from work and told the owner what had happened and if I could bring back the incorrect part and purchase the "correct" part? He seems perturbed and defensive... and must have thought I thought he was somehow responsible for the error. I assured him, right away, that I did not! and I had made the mistake of getting the part # from the you-tube video that used a dryer that looked just like mine. My mistake, not his. Then I gave him the correct part number (repeated it twice for him, as asked). He went to look for it and came back to the phone and said he had the part. So I went on my 30 minute lunch to make the exchange. When I arrived he was not at all as friendly as the day before. He handed me the new part, took the other, and said even exchange. Because I was in a hurry myself, I didn't check out the number on the part, though it did "look" square, as I remembered. When I got home, I noticed he had given me the wrong part number, and I would not fit. I believe intentionally. I will not go back.

Description of Work
I called and gave a part number I wanted to purchase to repair my Kenmore dryer. (I had watched a you-tube video and used that part number).

Gave us good advice to do the job myself. Found a replacement part from different manufacturer since Chinese parts for this Magic Chef dont exist. Ill call him first for my appliance problems.

Description of Work
Needed parts for a DIY situation on an apartment size refridgerator. He found a replacement part that was a suitable substitute. Extremely helpful even though he wasnt getting to intsall parts. Very knowledgable.

Bryan was very helpful and really saved us money by convincing us we could do this ourselves. He can be a bit salty in his personality but he really made it easy for us to accomplish this repair with instructions/diagrams, etc..

Amtech specializes in Appliance Repair. We are family owned and operated and offer very fair and affordable pricing! We specialize in repairing the following: Refrigerators, Washers, Dryers, Dishwashers, Stoves, Garbage Disposals, Ranges, and Microwaves. In April 2017, we added a service designed by Culligan which filters the water used for cooking and drinking. This system reduces Lead, Chlorine smell, Pharmaceuticals, Sediment, and much much more. Our motto is that when the job is done, you are delighted! Come visit our lively Facebook page; Amtech Appliance Service on FB. You can also visit our website @ Amtechrepair.com or email us @ Amtechrepair@yahoo.com. Prefer the phone...so do I...262-377-8516. Thank you for considering Amtech Appliance Service for your major appliance repair needs! We understand that when a Refrigerator is on the blink, this may be an after hours call. If we are available we will come so give us a try as often times we can help!  …

LAABS APPLIANCE PARTS & SERVICE is currently rated 3.3 overall out of 5.

No, LAABS APPLIANCE PARTS & SERVICE does not offer eco-friendly accreditations.