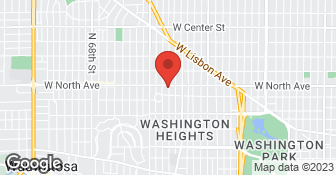 Description of Work
A single door refrigerator with bottom freezer and no ice maker was leaking water onto the floor and had a large ice flow in the bottom of the freezer. |Jim repaired the clogged drain tube so that excess moisture no longer froze in the bottom of the freeze, but now goes to the pan under the refrigerator. |Great results, reasonable price and very knowledgeable and friendly.

I called for service on my dryer. The person taking my call said he had a service guy in the area that he could likely have him stop by before noon. He called me back in less than 15 minutes that he could be there. The person came and took a look and the cost of the work was less than anticipated which was a wonderful surprise. The technician was professional and I would definitely call on them again if needed in the future because they gave the impression of being trustworthy and honest.

Showed me why our refrigerator was leaking and what to do about it the next time it happens so that we do not have to call a repair service.

Had the Part on his Truck. Very fast fix

Description of Work
Fixed a gas dryer that would not heat up. Replaced the gas Ignition coil.

Description of Work
Diagnosed the freezer problem and fixed it

They were very good and I was pleased with them. They were reliable and reasonable. I've used them twice in January and they went out of their way to help me. They were very, very quick and it worked out well. I would use them again.

Description of Work
I used Jim's Refrigeration Sales & Service twice to fix my refrigerator. The second time it was my fan and the first time it was something with the freezer.

Overall, a good experience. I feel as though my dryer got a new lease on life and I'll be able to use it for many years to come.

Description of Work
My dryer was acting up. He checked out the situation, recommended a repair and did the repair all in the same visit.

They weren’t able to fix it and it turned out that the circuit board had some issues. They said that if they can’t fix it, then they won’t charge me for it. They spent a good amount of time trying to fix it.

Description of Work
We have used Jim’s Refrigeration a couple of times. They tried to repair the refrigerator in March.

Went well. Did not take very much time. I am the landlord, so they called my tenants to set up the time that worked best for them. They were also able to go the next day for service.

Description of Work
Company made a service call to diagnose a problem with the refrigerator. Found the problem and was able to temporarily fix it until we decide to have the complete work done

Description of Work
repaired my refrigerator did a good job would have them back in a heartbeat.

He repaired the problem very quickly. He was easy to schedule with. I appreciated that he explained to me very nicely what the problem was. His explanation was absolutely correct. He also offered suggestions as to how to avoid this in future.

Description of Work
They repaired my refrigerator.

Description of Work
Repaired fridge that was leaking.

I had no problems and the dryer works. He was neat, prompt and friendly.

Description of Work
He came to check out the dryer. I got them off of the list. They service kitchen and laundry room appliances. My dryer stopped working and they fixed it.

My freezer died and I called Jim. He came to look at it the same day (arriving exactly when he said he'd be there) and found the fan had died. He tried to fix it before ordering a new part but it was not to be. He ordered a new fan, called me the next morning when it arrived via UPS and came to install it that afternoon (exactly when I asked him to come). I was very happy with the great (and super fast) service. Also, Jim did tell me before he ordered the fan what my repair cost would be. I've found that many places "surprise" you with the cost. My freezer works like a charm now and I'm so happy to have it back and not have to buy a new one!

Description of Work
Jim replaced a fan in my upright freezer.

Ed was prompt and diagnosed the problem quickly. However, he gouged my kitchen floor moving the fridge out of the cabinet, something we didn't notice before he left, and we'd already paid. I called their office and politely told them that their workers should be more careful .. at that point, I was just interested in informing them of the damage so that future customers wouldn't have the same issue. A few minutes later, Ed called me back and immediately called ME a jerk and accused me of gouging the floor myself! He yelled at me to spell it. I asked, spell what? His answer? ''J-E-R-K''. It was really quite unbelievable. The worst part? The other company technician came out the next day. STAY FAR AWAY FROM JIM'S REFRIGERATION!

Description of Work
My freezer was not cold enough. Ed from Jim's Refrigeration came out and diagnosed the problem as a freon leak. He described that in general, if not covered by a warranty, freon leaks are very difficult to fix and cost several hundred dollars. Since my fridge is only 2.5 years old, I wanted to try and get a company to fix it, as the alternative seemed to be replacing the whole fridge. I chose Jim's Refrigeration because it had good reviews on Angie's List.

ALL OF US AT JIM'S REFRIGERATION WOULD LIKE TO APOLOGIZE TO THIS MEMBER. THIS WAS AN ISOLATED INCIDENT AND HAS BEEN RESOLVED. WE DO OUR BEST TO ACCOMMODATE OUR CUSTOMERS.
5.0

I called on a Thursday and was able to get a technician out on Friday afternoon to look at my dryer, which had stopped working. The technician arrived slightly before the appointed time. He was able to quickly diagnose the problem and recommend that we replace the dryer motor and belt. Because he didn't have the necessary motor we made an appointment for him to do the actual repair on Monday. Again he arrived on time and was able to get the job completed within about 1 1/2 hours. This time included his having to go back to the store to get a new fan because ours broke when he was trying to remove the motor. Although he had to purchase a new fan, he did not charge us for it because he said that it was his fault and that sometimes that happened.

Description of Work
Our dryer motor, belt, and fan were replaced.

I realized at 2:45 p.m. that my refrigerator/freezer was not working. I immediately went to Angieslist.com and checked under large appliance repair. one of the businesses listed was located very nearby. I called and described the situation (fridge running but not cooling), the age and make of the fridge, and asked if it sounded like it was fixable. He said yes he thought so and would fit me in before the end of the day. He arrived around 4, found the problem, replaced the fan motor and had the fridge up and running by 5 p.m. For $126.00. A true Angie's List success story.

When they were running late they called to warn & apologies and then arrived as soon as possible. Easily diagnosed and fixed the problem. Responded with in 36 yours of calling them. Then went over how I could replace the oven light on my own.

WE CALLED ONE AFTERNOON AND GOT SERVICE THE NEXT MORNING. JIM SEEMED VERY KNOWLEDGEABLE AND VERY EFFICIENT. THE PRICE WAS QUITE REASONABLE.

Description of Work
OUR RELATIVELY NEW FRIGIDAIRE REFRIGERATOR WAS LEAKING WATER ONTO THE TOP SHELF INSIDE THE REFRIGERATOR. JIM EXPLAINED THAT THIS IS QUITE COMMON IN NEWER REFRIGERATORS AND HAS TO DO WITH A CERTAIN PART NOT BEING ADEQUATE TO DO THE DEFROSTING JOB. HE CLEARED THE REFRIGERATOR DRAIN AND ADJUSTED THE LEVELING AND WHATEVER ELSE NEEDED TO BE DONE TO ELIMINATE THE PROBLEM.

HE DID THE WORK ON TWO VISITS DURING THE SAME DAY. THIS IS THE THIRD TIME WITH THESE GUYS, AND THEY ARE RELIABLE, EFFICIENT, QUICK, AND PREDICTABLE!! HIGHLY RECOMMENDED!

Description of Work
NEEDED GAS DRYER HOOKUP, WHICH WAS QUICKLY DONE FOR AROUND $45. I NOTICED THAT THE DRYER AND WASHER COIN MECHANISMS WERE VANDALIZED, DAN FIXED ONE, AND REPLACED & INSTALLED THE OTHER ONE AT THE COST OF THE ACTUAL MECHANISM, HAD I REPLACED IT FROM A LOCAL HOME IMPROVEMENT STORE ($75), PLUS HIS WORK HAS WARRANTY.

THEY WERE CALLED IN MORNING, AND THAT AFTERNOON SERVICE WAS RESTORED-- QUICKLY AND INEXPENSIVELY. AND THEY BILLED MY CREDIT CARD OVER THE PHONE WITHOUT HASSLE!

Bonded
Insured
All statements concerning insurance, licenses, and bonds are informational only, and are self-reported. Since insurance, licenses and bonds can expire and can be cancelled, homeowners should always check such information for themselves.To find more licensing information for your state, visit our Find Licensing Requirements page.
General Information
Free Estimates
Ask for Details
Eco-Friendly Accreditations
No
Payment Options
Check, Visa, MasterCard
Warranties
Ask for details

Jim's Refrigeration Sales & Service is currently rated 4.8 overall out of 5.

No, Jim's Refrigeration Sales & Service does not offer eco-friendly accreditations.

No, Jim's Refrigeration Sales & Service does not offer warranties.