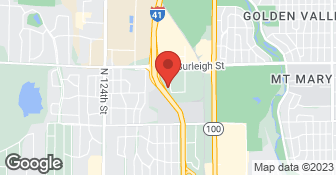 They were professional, helpful, patient, cooperative, consultative, instructive and friendly. In a word they were amazing. The team was led by Quinn Hanson and Dave Szeklinski. Both gentlemen were just fantastic in helping us through the process. They found issues I missed on the first glance and crawled in the attic to check the dryness (or not) of the attic.

Description of Work
The house experienced a frozen and therefor busted copper water pipe in the basement. I called them at 9 pm one evening and they were on site ready to start the water removal and drying process at noon the following day. They started the water removal process immediately, helped assessed the full extent of the damage, coordinated the start of the claim process with insurance adjuster, met the insurance adjuster at the house to assess the damage and scope of repair work.

They did a wonderful job. I couldn't even tell it happened. They understood what I was going through, and they were very compassionate.

Description of Work
I had a sewer line break, and everything flooded. Belfor USA Group, Inc. took care of everything.

Description of Work
they showed up after a fire and flood at my home. some work was done. the supervisor was arrogant and told us what could and could not be done. this was not his call. he hired subcontractors without our approval. some were okay. some were not. when it came to a roofer we wanted final say. he refused and said he would walk off the job at our home unless we hired his friends. we refused to use his friends. they were not experienced at cedar shake installations. his company backed him and belfor walked off the job.

Everyone that they had working for them did a great job especially the masonry guys, I just loved them. They are a general contractor type repair group in Wauwatosa, Wisconsin. They came through our insurance company because the insurance company said if we work with this group, then we don't have to run around and get estimates, they will handle it and it was easy. They did some carpentry, roofing, plaster patching, interior and exterior painting. They had other people doing it but they were the overseers of the work. I dealt with the actual workers and the overseers. My impression about the company and the contractors was good. My husband dealt with a lot of the phone calling back and forth and I was more of the contact person for when they needed to show up. It was good to very good. My house is very prone to getting stems where it leaks and my husband told them a specific thing that they had to do with the roofing piece and now they have to come back because as we did have leaks as a result of them not doing it the way he had asked but everything else was done well. The painters were really talented. The people who did the interior and carpentry were also very good. They weren't returning calls as promptly as we would have like. There was some stalling between projects and we just wanted to get it done and there would be a week that would go by and we'd have to call them and ask for what's happening next. Now that we know the quality of the people that they hire, that impressed me because you would never know if you've dealt with anybody like that before. It was a 100 year old tree and it was beautiful and but because it snapped 15ft. off from the base, it didn't kill us so we are happy. Had it broken off lower to the ground, it would have crushed us. That's why we laugh about it because it could have had a whole different ending and because it was a soft tree called a basswood; they really said if this was an oak tree, it would have cracked up the middle of your house.

Description of Work
We had some damage done when a tree fell on our house last summer or spring and we had some roof repairs and some interiors plaster done for cracks along with painting and masonry work on the front porch too and they were all subcontracted from Belfor. They did the work this past summer.

The work was also covered under insurance. My insurance agent forgot to put that on our policy and we are getting it sorted right now. I chose them because they were courteous, punctual, thorough, and wonderful. They had to cut out the drywall all the way around before they could get the work done. They were fantastic. It just took them one day to get the work done. They brought in a huge crew and carried everything out to a dumpster. So we didn?t have to do anything. They cleaned everything and also helped me with the insurance work. Anybody who would hire them would be happy.

Description of Work
We used the services of Belfor USA in June of last year. They cleaned our basement after a sewer backup.

Bonded
Insured
All statements concerning insurance, licenses, and bonds are informational only, and are self-reported. Since insurance, licenses and bonds can expire and can be cancelled, homeowners should always check such information for themselves.To find more licensing information for your state, visit our Find Licensing Requirements page.
General Information
Free Estimates
No
Eco-Friendly Accreditations
No
Payment Options
MasterCard, Check
Emergency Service
Yes
Warranties
Yes

BELFOR USA Group, Inc. is currently rated 3.8 overall out of 5.

No, BELFOR USA Group, Inc. does not offer eco-friendly accreditations.