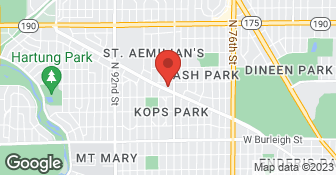 Could not have gone worse. The first tech (Will) sent out took my dryer apart three times, admittedly lost screws and bolts inside, was at my house for four hours and ended up telling me it was an electric issue. Turns out he tripped the fuse and didn't have a clue to consider this as a possibility. Made me call an electrician, and pay for electrician service only to learn about the fuse being tripped. Called Ansely back for them to come look at dryer again, as now established the problem is not electrical. Second tech (Anthony) came, took the dryer apart again, and said it was a circuit board problem and he'd have to order parts and come back again. Two days later, same tech (Anthony) returned to replace the circuit board after 3 hours he left telling me all his readings showed the dryer was working. I went to do laundry immediately after he left and the dryer did not work. Next business day I called called Ansley to report that my dryer was not working. Tech (Anthony) instructed me to disconnect the vent from the back of the dryer and the dryer would work then as he said it was a vent problem. I did so and the clothes inside dried. However, subsequent loads, with vent still unattached, did not dry. This proves it is not a vent problem. The next day (Saturday) I called Ansley to report that the subsequent loads had not dried, even with the vent unattached. I received no call back. On Monday, Ansley called my warranty company and reported the problem to be a vent problem...even though he had a voicemail from me stating with the vent unattached the clothes were still not drying. Ansley appliance never returned my phone call from Saturday. Instead they lied to my warranty company on Monday telling them it was a vent problem and they couldn't do anything else. I called Ansley on Tuesday, having expected a return call from Saturday. Anthony told me he would not come out to my house again to service the dryer because he "wouldn't get paid by the warranty company for a fourth service call." Even though, the dryer still isn't fixed. Not only was Ansley Appliance unable to help me, and blatantly lied to my warranty company, I found them to be condescending, having once been told I "couldn't possibly understand" the problem with the dryer. To every service call they were at least 15 minutes late to the 1 hour window; first time Will came at 1:30pm for a 12-1pm call and for the second call Anthony came at 2:15pm for a 1-2pm call. This company is incompetent, unprofessional, condescending, and should be ashamed at the level of service they provide.

It went extremely well. Frankly, I didn't think Anthony would be able to fix it, since I had a Sears Repair Tech out a year ago and Sears could not fix it. I thought I would get a second opinion before I replaced the range for $600-$800.

Description of Work
Anthony replaced an electrode wires from the spark module to the electrode on GE gas range. Basically, two of my four burners would ignite

Description of Work
I had Ansley for two different issues: one was for a GE refrigerator that was less than a year old that took a power surge and stopped cooling and one was for a gas dryer that was approx. 6 years old that stopped heating. Anthony was able to stop by and look at the refrigerator the afternoon I called. After troubleshooting he figured out what part was needed and told me he would be back to install in about 3 hours. He made it happen and the refrigerator is working well. Cost was $275.....this after I called at least 6 other service people who said they would not repair GE appliances and after contacting GE company service and given an appointment for 3 weeks later. |The dryer was a little different. It was determined that there could be several areas that could be the problem. I asked that they try to repair it, given their quote of $139. They came out 3 times in an effort to make it work, each time replacing another part. It would heat for a short time, then stop. After the 3rd time I determined I would just bite the bullet and purchase a new one. I appreciate that they tried and for their quoted price. I would highly recommend Ansley, they are knowledgeable, prompt, and courteous. I will call them again when the need arises.

As a result of the recent storm and power outage our refrigerator would no longer cool. Being only 6 mos. old I wanted it repaired ASAP. I called GE Repair and they were not able to get a technician out until July 29th. I looked on Angies List and called a couple of people who could not help. I finally talked with the people at Ansley who are GE certified technicians and asked if they could schedule me ASAP. I was given an hour window the same day!!!!! The two technicians, Anthony and Tony, came within the hour, diagnosed the problem, called around for parts and set out to pick up the part. They returned in about an hour and installed the proper part. They told me that it would take about 24 hours to cool and start making ice again. The technicians were knowledgeable, courteous, and quick with the repair. I would highly recommend them to anyone I know and will use them again in the future. I felt the cost was more than fair. I can't believe that more people have not used this service!!!!

The repairers came diagnosed, ordered parts and returned to complete the repair the next day.

Amtech specializes in Appliance Repair. We are family owned and operated and offer very fair and affordable pricing! We specialize in repairing the following: Refrigerators, Washers, Dryers, Dishwashers, Stoves, Garbage Disposals, Ranges, and Microwaves. In April 2017, we added a service designed by Culligan which filters the water used for cooking and drinking. This system reduces Lead, Chlorine smell, Pharmaceuticals, Sediment, and much much more. Our motto is that when the job is done, you are delighted! Come visit our lively Facebook page; Amtech Appliance Service on FB. You can also visit our website @ Amtechrepair.com or email us @ Amtechrepair@yahoo.com. Prefer the phone...so do I...262-377-8516. Thank you for considering Amtech Appliance Service for your major appliance repair needs! We understand that when a Refrigerator is on the blink, this may be an after hours call. If we are available we will come so give us a try as often times we can help!  …

Ansley Appliance Service Inc is currently rated 4 overall out of 5.

No, Ansley Appliance Service Inc does not offer warranties.