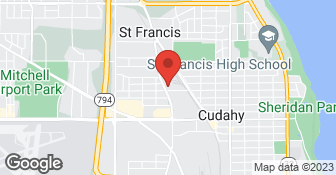 Thank you for the expertise and speed of Paul Vaccaro and Tony Burgarino at finding the source and connecting us to the appropriate contractors to solve the complex water basement issue. Especially thank you Tony for calling 2 weeks later to check that everything was corrected! Accurate Basement is the best!!!

I was able to make an appointment through Erin in the office to schedule someone to come out within a week. Kyle came out to give us an estimate. He was prompt and courteous. He examined our basement walls from the inside and then walked the outside of the property. He informed us we didn't need basement or foundation repair. Our problem was our gutters and the grading of our lawn. He recommended two solutions to those problems and stated which would be cheaper. We appreciated his advice and that he didn't take any money for the estimate or advice. If our basement or foundation ever does need repair, we are definitely calling Accurate Basement Repair.

Description of Work
We needed an estimate for moisture seeping into basement walls and edge of floor on one side of the house.

Paul Vaccaro came to our church St. Peter & Paul for an estimate on water leakage problem we have, He took time with parish members to explain our problem and suggested several repair option's we can try before he & accurate would need to be involved, His knowledge & professionalism was outstanding along with the understanding that finances at this time are tight for any Church these days. We will attempt these solutions he advised us on but should the need arise we will defiantly be contacting Accurate for there help . St. Peter & Paul Polish National Catholic South Milwaukee, WI.

The work was great, they were prompt and did a nice job.

Description of Work
Installation of an new drain tile system

We had a water issue in our basement that had forced us to keep things off of ground level, for fear of them getting ruined. Now we never had inches of standing water, but would have about 80% of our floor covered in a small amount water when ever we had hard rain, or show melted in spring. as it came in through the floor/wall seem around our house and ran to the floor drain in the middle of our basement. Est. build date on our house is 1905, so it is older and never had any drain tile or sump pump, or any other water reduction/prevention applications or installments. We 1st contacted heavily marketed competitor, whose quote ended up being just over double the amount we paid to Accurate, for more or less the same process and product, drain tile, drainage board, and sump pump. After the shock of the quote from the competitor we went online to do some research, instead of just listening to ads. We decided to have Accurate come out after seeing their reviews online, and because we discovered in our research by talking about with family and coworkers, that some of them had used Accurate before and recommended we have them come out at take a look. Frank came out to do out estimate, and I have to say I loved his personality and take on the situation much more than that of the competitors guys who seemed to use a scare tactic we they're first guy and then sent out a 2nd guy with a lower price, etc. Frank was awesome, straight forward, no BS. Signed our estimate quote the day after we got it, which was just under half of what the competitors lower price was. When the crew showed up to work, they were on time and ready to go. They ran into an issue with out lateral, and left that section open, for a plumber to come out and inspect that situation. Other than that, they completed all day 1 tasks on day 1, and were ready to proceed with finishing the job, but were held up for the lateral issue. They were very flexible with this, as plumber had to come out several times to investigate the whole situation. After it was determined they could finish (pour concrete) for the rest of the job but this section by the lateral, they were back out quickly and finished all of that on what would be their 2nd day out. Eventually several weeks later the lateral job was done and the section of drain tile needed to be finished. Accurate came back out on an agreed upon date, reconnected that section drain tile, poured gravel and concrete and were done in about 2 hours time. We were very pleased we Accurate from beginning to end, would use them again in future house if we needed any basement repair like this. Another reason we selected accurate was for their Warranty, which also transferable to new owners if you sell your house. A very important piece for us, as we are hoping to list our home here in the near future, and this basement repair was the last major project before we could proceed with feeling comfortable about listing our house, Hasn't been very long since the whole job was completed, but has been awhile since about 95% of the job was completed on day 1. And we are very happy to report, we have not seen any water in our basement at all. There is water in the sump pump crock, but it is super quite and we've never heard it unless we are near it in our basement as it is going off. Give them a call/email. You wont regret it!

Sweeping ankle-deep water down the sewer drain every time it rains is a pretty scary scenario, especially if you’re not a repair-savvy person. As luck would have it, the first place we called was Accurate Basement Repair. The friendly receptionist conducted a thorough and detailed intake and was patient when explaining terms unfamiliar to me. Jon from Accurate called the night before the consultation to confirm the appointment and gather additional information. During the consultation, Jon was extremely helpful in explaining the problem with the water in the basement, provided helpful solutions, and patiently answered our many questions, even though the necessary fixes were primarily “outside” fixes. I would highly recommend Accurate Basement Repair for their knowledge, high levels of professionalism, and helpfulness. Hopefully, with the solutions Jon suggested we’ll never need their services, but if we do, this is the company we’ll call!

Chris took alot of time to explain exactly what work would be performed, how the process would work and when the work could be completed. We were on a tight timeframe as home was being sold. Work was done on time, price was as promised and crew was respectful and professional. Highly recommend. JR- Milwaukee

Paul from Accurate came out and gave me a very fair assessment. I had been trying for 7 years to get this matter fixed and nothing worked. Right away he saw the problem and suggested I install a new sump pump just for this addition since that part is higher than the rest of the basement and could not be hooked into existing sump pump. Price was very fair given what they needed to do. They explained everything, did a great clean up job and were on time. Pro- since I had this done in January there was a price break. Con- I have to wait till spring to make sure this took care of the problem. However given that fact that the addition basement floor was originally never drained properly to begin with I feel confident the work Accurate did has taken care of the problem. Overall a great experience and would recommend them to anyone.

Description of Work
Basement of new addition was leaking

It went very well. I would recommend them.

Description of Work
1-Month ago Had interior drain tile replaced and had two walls reinforced. Jon came out and took measurements of my walls then took a look at my drain tile problem. When he was finished we talked about what he found and made suggestions on how to fix the problems. From the first day everyone that was working on my project was very courteous and as neat as possible considering what they had to do.

Called Accurate based on a recommendation from a friend. Brian came out to check out out situation. He was thorough in explaining what was happening. We haven't officially hired them yet, but I was very pleased with how he helped me understand what was happening. January 2020: Accurate is absolutely fantastic. Multiple people from the renovation company have complemented how well the finish product. The flooring company installing our floor said this was the best concrete work they have seen from a drain tile job. I cannot recommend them enough.

Arthur Karos has been an expert in Masonry for 23 years and a Master Mason for 12 years. With 85 year of combined experience along with his five employed master Masons, you can expect the job to be expedited in a professional manner. We do chimney brick laying and stone work, chimney repair, flue installs & repair, ash-pits doors, stainless steel flue caps, Tuck Pointing, replace bricks, and insurance work for brick damage. Chimneys, masonry and stonework are done with expertise. We can custom match stone and color match mortar for Tuckpointing or masonry repair. FOR FASTER SERVICE, PLEASE USE ANGIE'S LIST MESSAGING!  …

Todd Matula, the founder of Matula Masonry, started the company in 1998. The company spans Brookfield, Milwaukee, and surrounding areas in Southeastern Wisconsin. He has 30 years of masonry experience in which he perfected his craft. Matula Masonry is an experienced business whose goal is to provide customers with the highest rate of satisfaction possible. To achieve this goal we provide quick communication, a planned timeline for all projects, and follow ups.  …

Accurate Basement Repair is currently rated 4.8 overall out of 5.

No, Accurate Basement Repair does not offer a senior discount.

Are there any services Accurate Basement Repair does not offer?