Plumbing
Heating and Air Conditioning
Drain Cleaning
Sewer Cleaning
Natural Gas Lines
Wells and Pumps
Water Filtration and Softening
Water Heaters
Septic Systems
Licensing
Insured
All statements concerning insurance, licenses, and bonds are informational only, and are self-reported. Since insurance, licenses and bonds can expire and can be cancelled, homeowners should always check such information for themselves. To find more licensing information for your state, visit our Find Licensing Requirements page.
Business Details 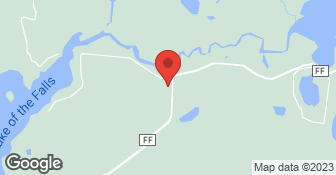 We are a full service contractor from design, to installation, to service. Specializing in septic systems, geothermal heating and cooling, well pump systems, drain cleaning, opening and winterizing homes and water treatment....

Follow up was awful. I called for a problem and got no response. This includes many, many texts, phone calls and a visit to his home and talked with his wife. Another provider even talked to him and told him to contact me. He still would not. My boiler was under warranty as well. It was absolutely disheartening. I gave him every chance to make it right. He never did. Other providers have said that...

Reason for the first repair was running the unit out of Lp and system froze. Fix frozen pipes and replaced boiler on a tight budget under $3000. Made customer aware the reasons for the problems she was having and told her the unit needed to run in the winter otherwise she was going to have the same issue. The unit worked fine for two winters with no issues and zero service. Price of Lp went sky hi...
5.0

I called Hank on a Monday morning after my hot water heater had started to leak over the weekend. He told me the two possible problem and said he would stop over and take a look at it that day. When I returned home from work it was fixed and has not leaked since. It was great working with Hank!

DESCRIPTION OF WORK
Hank came over and fixed my leaking hot water heater the same day that I called.

Drilling of wells and septic pumping