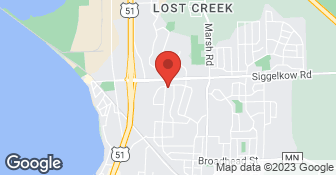 I was told the project would take about 4-5 days or so and it ended up running into two weeks+, as at times he or would show up late and/or leave early. The painting was not even close to being in the realm of a professional paint job. I had to point out blatantly obvious areas that needed touch-up throughout each of the three rooms on multiple occasions, and the painting looks especially terrible around the door casings. (I have since had a new contractor come in to move forward with further home renovations and he noticed right away that the finished paint job was terrible, and that the trim looked awful painted, and that he would never recommend painting that type of trim, but instead replace it for about the same cost as painting it). One day I was especially angered to come home and find white paint streaked all over my brown carpet and even down the hallway coming from our third bedroom. Upon going into the other two bedrooms, there was also multiple areas of paint on the carpet in both of these rooms as well. When I informed Chris, he did work on using a product to remove the paint from the carpet, but as you can imagine, this was not perfect, and took alot of extra time. Also, the patio door in the master bedroom was installed incorrectly, with the door not sealing correctly; Chris did appear to correct this, but we have since noticed that one of the glass panels of the patio door seems to have been installed upside down. On the new closet doors in all three bedrooms, the hardware was placed incorrectly so that the doors were not functioning in opening correctly. Chris did move the hardware to the correct spot upon my informing him of this, however the old areas still need to be sanded and painted over again as they are highly visible. Chris set up an appt to come address this following the end of the project, and he never showed up. No email or phone call. Unfortunately I had made the mistake of paying him the remaining balance prior to this, and so had a pretty good feeling he would not show up to finish this. Please beware as It is heartbreaking to part with your hard-earned money, with results like this.

Chris the owner is quite the salesman, Wrote him the first check and he worked probably 30 hours the first week and then dropped down to 15 hours per week after that. He always had a good excuse as to why the work had not been done or he left our house in such a mess. Then he came and an apologized and said he was busy on another project and was sorry he was so slow but needed another large check to move forward because of changes we made, but he promised he was close to done. We wrote him a second check for $15,000 and then that his hours dropped to 8 hours per week. We got on his case, and again he had an excuse and he did show to finish the trim but his trim work is really bad. Very poor professionalism and craftsmanship. Very poor. Not a recommended contractor.

Description of Work
Had them in to do a bathroom remodeling project, it consisted of demolishing the old bath, putting in two new bathrooms and doing tiling work and finish trim.

We did do a major double bathroom renovation in the member's home, but not much of what he said about us is true. The delays in the schedule were caused by him insisting on ordering all his materials by himself, most of it online, and all while the renovation was going on. We stand behind our craftsmanship and get plenty of good reviews on our tile work and trim work; and most of our customers appreciate our professionalism and honest approach to remodeling. Unfortunately, you can't always please everyone; Although I always try as hard as I can...

My name is Mark Schwebach. I am the owner of Complete Handyman as a division of Dream Homes LLC. I founded the company in 2004. I am 100% involved with day to day activities. I specialize in finishing basements. When it comes to basements, I will be involved in every aspect of the job. I will be hands on from the initial design process, the bidding process, acquiring permits, doing the actual construction, overseeing sub-contractors, through to the completion of the finished basement. I personally guarantee the highest level of attention to quality and detail throughout the entire project.  …

CB Home Renovations is currently rated 2 overall out of 5.

No, CB Home Renovations does not offer a senior discount.

No, CB Home Renovations does not offer warranties.