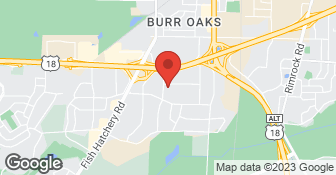 Signed the contract and picked out all the materials in June 2013, were under the impression the job would be done by the end of August, job started mid-October, first bathroom done the week of Thanksgiving, second bathroom done in mid-January. We had to contact them in August to ask what was going on, when the project was going to start. They said other projects had run behind and they expected to start later in August, but didn't start until mid-October. Three months to get the two bathrooms done because there were sometimes several days in a week when no one showed up to do any work and very few weeks when there was work done every day. They blamed the tiling company, Nonn's Flooring, at times, but as the contractors, they had the ultimate responsibility of making sure the subcontractors were on time and doing what they were supposed to. Supplies weren't delivered on time, even though the project started months after we picked everything out. Tiles of the same pattern were placed next to each other and the accent tiles are not evenly spaced or flush with the wall. They didn't place fixtures where we asked and put some of the wrong fixtures between the two bathrooms. They weren't here to meet us for meetings they set. Their subcontractors were rude and seemed angry to be here. Average quality overall and the hassles and delays were just ridiculous. We didn't even tell them the things that were wrong because we were so tired of having them here and I would rather live with the imperfections than have them in my house anymore. I'm glad they're done and would never ever recommend them for anything.

Description of Work
Complete remodel of two bathrooms, down to the studs.

USA Insulation of Madison is a locally owned and operated company that values honesty and integrity in all aspects of our business. Our dedicated team of professionals have over 26 years of hands-on experience, to provide innovative ideas and suggestions tailored to your projects. Our services are customized to your individual needs, paying close attention to the details of each project that we are involved with. Please feel free to contact us today!  …

Bonded
Insured
All statements concerning insurance, licenses, and bonds are informational only, and are self-reported. Since insurance, licenses and bonds can expire and can be cancelled, homeowners should always check such information for themselves.To find more licensing information for your state, visit our Find Licensing Requirements page.
General Information
Free Estimates
Ask for Details
Eco-Friendly Accreditations
Yes
Warranties
Ask for details

How is CHRISTENSEN CONSTRUCTION overall rated?

CHRISTENSEN CONSTRUCTION is currently rated 4 overall out of 5.

What days are CHRISTENSEN CONSTRUCTION open?

Are warranties offered by CHRISTENSEN CONSTRUCTION?

No, CHRISTENSEN CONSTRUCTION does not offer warranties.

What services does CHRISTENSEN CONSTRUCTION offer?