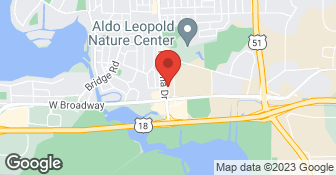 At CertaPro Painters, our reputation is based on Certainty — your Certainty of a job well done. We focus on the details of every project — interior and exterior — and we focus on you, our client. ...

The experience that another person stated in their review in regards to not being service oriented was spot on. I could not be more disappointed. Matt who I met with twice prior to the work being done, gave me the impression that their work was top notch and justified the fact that they were the highest price for what we wanted painted. I felt confident in my decision to hire them, and looked forward to the results. The end result was terrible! Sloppy work, took pictures and sent them to Matt who sent the same outsourced crew back in to touch up all the areas that were not painted well, and it still is not correct. I was also given a card to contact the crew directly and not go through Certa Pro. There are still pen marks on the walls that they did not paint a second coat on, the edging does not look like it was done by a professional, and the previous color that was on the walls is already coming through. I don't think I have ever been this disappointed with a service. I would think Matt or another owner would want to come out and see the work for himself but after the email where he stated he was sending the crew back out, we have not heard anything from him. I regret using Certa Pro and I certainly will not recommend them to anyone else.

Description of Work
Painted two small bathrooms and one bedroom.

They did a good job. They got the job done quickly. Good quality work, it looks good.

Description of Work
They removed some wallpaper, repainted our living room and fixed some plaster cracks.

Doug Livdahl (owner) was great work with, very professional, polite and a nice guy. Edgar the supervisor was very good, very detailed and professional. Great attention to detail was done with the painting of our house. Competitive price and they started within 10 days of signing the contract. I would recommend them in the future and use them in the future.

Description of Work
Exterior painting of the entire house

After meeting with several contractors about my cedar siding, Certapro was the first company that found a practical, reasonably priced solution to my needs. I was able to caulk and repair much of my weathered siding vs. replacing it, saving me thousands of dollars. I liked that quality and warranty of the paint/stain and am happy with the finished product. I was very pleased working with Doug and his crew of 3. They were hard-working, professional and neat. Would definitely recommend to others.

Description of Work
Repaired and painted cedar siding and trim

The outside was perfect and the job was very fast. On the inside the job was fast, but there were a couple spots that they had to go over again and they dripped some paint.

Description of Work
They painted the interior and exterior of my home.

There was a crack in the wall in the bedroom and the painter really didn't address that. He patched it when I pointed it out and then I ended up having the painting the patch myself. I was not too happy with the way they addressed the situation. The rest of the job was done well and also done neatly. They also left some paint for me to use for the patch.

Description of Work
I had them paint a bedroom for me.

They are a franchise operation, so they don’t have their own crew. They’re very sales-oriented, and not service-oriented. They say they’ll use any paint the customer wants, but they charge extra if their paint isn’t used. They hire painters by the job, and the crew that did the job even gave me their own business cards in case I needed to have more painting done, so I wouldn’t have to go through Certapro. They came out a second time to try to fix the painting job, but never really did. Everything that they painted had to be re-painted within a year; now we are also on their mailing list! The owner meant well and was nice, but they did not do a good job.

Description of Work
They did some interior painting about two or three years ago.

My wife worked with them primarily, and she was very satisfied. They provided a good estimate and held to that estimate. They always showed up when we were expecting them to, and we were happy with their work overall.

Description of Work
They did some exterior trim work on our home.

The service was great overall! The only issue was that they showed up on a day that I wasn’t expecting them to, but that ended up turning out in my favor. The painters were extremely professional and took great care of my property, cleaning up beautifully. They did a great job. Even though the work was done about two years ago, the job they did still looks good.

Description of Work
They painted the porch railings, spindles, and uprights. They also painted the trim around the garage door.

Description of Work
They did some interior painting.

Description of Work
They painted the interior of the entire home.Overall, the experience went well. They were recommended to me by my realtor. I set up the appointment for them to do the work, but my realtor was the one who interacted with them during the work. My realtor also let me know they did a very nice job!

The process went very well. I was kept informed as to projected start and finish timelines. Finished product turned out excellent.

Description of Work
The deck was cleaned up, power washed and restained.

The paint was applied in July and so far (January) it hasn't peeled so I'm happy. Doug Livdahl was a pleasure to work with as were the painters, Scott and (?). They were quick, neat and were careful around the flowers that were in front of the porch. The only problem was that they appeared on a day when I wasn't expecting them but I was home and it worked out well. I would hire CertaPro painters again.

Description of Work
CertaPro painted my (wood) front porch. I had been doing the job for years but recently the paint would peel within weeks of completion so I hired professional painters to see if they could tackle the problem. I got another quote for the job that was almost the exact same amount so I decided to try CertaPro.

The work was excellent! Their price is based on the job, and was reasonable. You don’t pay anything until the job is complete, you don’t put any money down, and they also have installment/payment options available, which is very rare! It’s a national company. The painter was incredibly professional, and the owner even came out with references that people have filled out on the type of work that you’re having done. They did two coats of paint. Prior to painting, they power washed. They left the extra paint. I’m particular and they did a great job. The work was done on time, and everything went well.

Description of Work
They did some exterior painting on our home, including window frames, pillars, and railings.

The experience was okay overall. They subcontract all of their work.

Description of Work
They painted the outside window frames and trim on my home.

Accurate Powerwashing, LLC is a family-owned and operated business with over 40+ years of experience in residential and commercial pressure washing. We have extensive expertise and we treat your home with the same care we would our own.  …

"Five Star Painting of Madison is a locally owned and operated business. Five Star Painting knows how important it is for your space to look beautiful. From commercial interiors to residential exteriors, we do it all. Our goal is to make a major difference with simply a fresh coat of paint, giving new life, value, and style to your property. We are the team to call for basic paint jobs, total transformations, and everything in between. We are committed to delivering Five Star Quality without the Five Star Price! Our projects are clean, on time, and on budget. We strive to provide the best in quality and service at an affordable price. Prompt reply to your request and workmanship is guaranteed. Call today for a free in home consultation."  …

Specializing in exterior and interior painting! We guarantee your satisfaction and we won’t leave until the job is done right. We pride ourselves on the quality work we provide, while delivering great customer service! Check out our services offered and call or click to schedule a free estimate today!  …

How is CertaPro Painters of Madison, WI overall rated?

CertaPro Painters of Madison, WI is currently rated 4.1 overall out of 5.

What days are CertaPro Painters of Madison, WI open?

What payment options does CertaPro Painters of Madison, WI provide

Does CertaPro Painters of Madison, WI offer a senior discount?

No, CertaPro Painters of Madison, WI does not offer a senior discount.

Are warranties offered by CertaPro Painters of Madison, WI?

What services does CertaPro Painters of Madison, WI offer?

Are there any services CertaPro Painters of Madison, WI does not offer?