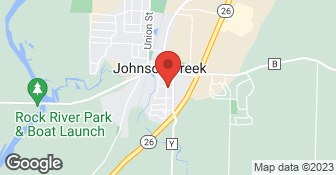 Horrible. The pos even charged me for having to call and fight him to show up. So Mr. Caroll I looked forward to your threats of suing me.

Description of Work
This guy is a walking joke. He treats people like trash. Can't show up to his scheduled appointments. Then screams and yells at you when you ask where he is. His website misleads. He has no other employees. He's a one man pony show. He changes his business locate to keep the bad reviews from following. Maybe he should see he's shrink more. But he's probably to busy beating his wife because all he can do is verbally threaten people with suing them. This man, oh my bad, this piece of trash who states he's not trained in repairs as he claims. Stands in my basement guessing what's wrong with my dryer. I Google everything for him. Run from this guy!!! I have text like the other lady. All this for a heater core.

...He arrived to fix our washer on March 14. Mu husband was present. He did not appear to know what he was doing. He stated " I broke somthing" and said he will be back the next day to fix it. He did not show up and refused to respond back to us for 5 days. We had Sears come fix it and showed us what he had broken. It would cost $500 to fix and was not worth fixing. He texted my husband after the 5 days because we threated to get a lawyer. I have copies of the bizzare texts that he sent us(. Re: YOU dont get to make the rules. I am so fed up with Watertownian demands of caviar for the price of peanut butter. I dont do have to respond according to your WHIMS. You have a minor inconvenience etc....)goes on and on. This man has harrassment charges and criminal charges pending in Wisconsin. He also does not have a driver's liscence and acts very strange and innapropropriate. He appears to have some mental illness issues by the way he talks and responds.

Description of Work
Broke our washer

Description of Work
I emailed Hi-Tech to have a new gas range installed. James was prompt in his reply and provided excellent information including the suggestion that a pipe fitter needed to extend the gas line. Although I needed to hire a plumber to do the work, I wouldn't hesitate to hire Hi-Tech in the future.

This company is extremely unprofessional. He came to the house hours later than the arranged time. He told us that he broke his prescription glasses and couldn't see very well. He identified the small fan in the back of the freezer as the problem but couldn't remove the part to replace it. Since he couldn't see, he was asking my husband for help. He then spent 30 minutes on his phone, in our kitchen, ordering a replacement part. The freezer was wide open and all the food he took out was melting on the counter while he was on his phone. He then decided to move our refrigerator across the kitchen floor and left permanent scratch marks all over the floor. After being in our kitchen for over an hour, sharing stories about his depression and empty nest syndrome, he gave us a bill for $80.62 and said he would be back to replace the fan. He required payment of $65.00 cash for this visit. He returned the next day to put the replacement fan in but realized he didn't bring the part with him, so he said he would return. We haven't heard from him since. I would never recommend this company; the man has no idea what he is doing and has no respect for your time. We paid money for a job that wasn't even finished.

Description of Work
We called asking for service on our refrigerator/freezer since it had been making a loud whirling noise.

I contacted the company to fix my dishwasher and the man took my information and said he "might get by later that afternoon and would call me back in a little bit". He did not call me back that day. So, I called him again the next morning and again he said (with no apology for not calling the day before) that he would be by that afternoon to fix my dishwasher and would call me that afternoon with the exact time). No phone call. No show. Both days I didn't go in the office and moved my schedule around. Very inconsiderate! I ended up calling Radtke Appliances in Oconomowoc and they came out within a day and fixed it in a matter if minutes.

Description of Work
No services were performed because the man said (for two consecutive days) that he was coming that day to fix my dishwasher and did not show up or give a courtesy call.

Called in AM from Angie's list - he was going to try and squeeze us in later that day. Was here by 4:30 and done by 5PM - Very pleased and 4 days later is still working fine.

Description of Work
Fridge that was leaking water, older GE frostless turned out to be a plugged discharge - took less than 30 minutes.

Thanks for your confidence and compliments! Jim .

Master Services is a world-class provider of residential home services such as: Plumbing, Heating, Air Conditioning, Indoor Air Quality and Drain Cleaning. These Products and services are for improving comfort, reliability, peace of mind, plus cleaner, fresher, and healthier homes. In addition to scheduled service checks, repairing of existing equipment, and installation of new equipment, we can help you find ways to reduce your energy bills through a thorough cost-benefits analysis. We have an extensive history of repair service on all brands of plumbing, central air conditioning and heating systems. Master Services, Inc provides quality workmanship with professional, dependable, and courteous service with our "Fixed Right or It's FREE!"™ We offer 24-hour emergency service so that you can count on us to be there when you need us the most. Our certified technicians use state-of-the-art technology to diagnose and repair existing systems and always use the finest new equipment for installations in the industry. Furthermore, we have a patented Straight Forward Pricing Guide™ so you know what the price is before we do the work and you are never charged by the hour. How many companies are willing to show you their price books? You can count on Master Services to do the job right. We service all brands of plumbing, heating and air conditioning equipment.  …

We no longer replace refrigerator or window A/C compressors since costs are prohibitive. We can not replace a water heater.

Hi-Tech Appliance Specialists is currently rated 2.1 overall out of 5.

No, Hi-Tech Appliance Specialists does not offer free project estimates.

No, Hi-Tech Appliance Specialists does not offer a senior discount.

Are there any services Hi-Tech Appliance Specialists does not offer?

We no longer replace refrigerator or window A/C compressors since costs are prohibitive. We can not replace a water heater.