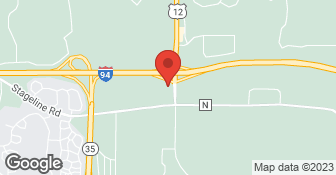 I've used Sunset on and off since 2003 and they are always the best in price, quality, and user experience. I have tried other companies when they are really busy but I always come back to sunset because they are just the best. What at differenciates them from others is they listen to what you want and then they provide the best options for you. They ask about other services so you aren't wasting time because they can coordinate it all. Since they are trenching over to the cabin they asked about network, gas, plumbing, cable! Nobody else that provided a quote thought of that. To me this is everything to think of the customer and my costs first and not just what they need to do to hurry up and get it over with. their prices are about 50% less than others in the area and I can't stress enough that they listen! They don't sub out the work they take full responsibility for everything and they care about the quality more than I do (I have high standards but theirs are higher). The only negative is that their timeline are a bit longer than I wish but then every good company is fully booked and they're picky on who they employee. Look forward to starting the next project of the cabin with them and I'll report the success of that too.

Description of Work
I called them about a very minimal electric service and they said they would get back to me next week. Two weeks later I hadn't heard from them, so I called again. Finally they answered my call and I asked them how much they charged per hour and they said there was a $150 minimum just to come out. I told them to forget it!

I called Dave and he came to my home, and we discussed several projects. He was to provide me an estimate I gave him my e-mail address (wrote it myself). We never heard from him again! I sent texts to his phone twice (I saw the phone, and know it was an android, certainly capable of receiving text messages), and called him once, leaving a message on his voice mail. If he didn't want to do either of those projects, he at least owed me some kind of response.. Why would I ever bother with him again? His only excuse, as I see it, is that he died.

Description of Work
Nothing, despite promising to provide me a bi

Hit and miss. When they worked through the builder my instructions were not followed; I asked for very specific things with my computer system and didn't get it. Additionally, the wiring on each circuit is weird where I have things on multiple floors on one breaker... It's kind of a mess. But when I hired them directly they were exceptional. So I'm not sure what to think.

When he finished with the problem we hired him to do, he pointed out that the company charged by the hour and that we would have to pay for at least one hour, and then he asked if there were any other electrical issues he could attend to. So he worked on our door bell and discussed other electrical aspects of our home. This was amazing considering that he could have simply spend the few minutes required to fix our house fan switch and left. This experience leads us to highly recommend this company!

Description of Work
The electrician found the problem with our house fan and solved it within minutes of arriving at our house.

How is SUNSET ELECTRIC overall rated?

SUNSET ELECTRIC is currently rated 4.6 overall out of 5.

What days are SUNSET ELECTRIC open?

No, SUNSET ELECTRIC does not offer eco-friendly accreditations.

What services does SUNSET ELECTRIC offer?