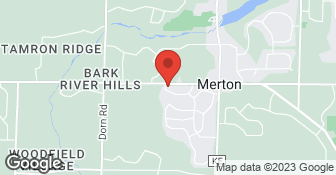 I am always a little weary cold calling any contractor. I think for the very first time I knew I had a partnership with my contractor. Tom just knocked it out of the park, as did his fine crew from the minute we spoke. Very timely, polite, efficient and organized. The patio turned out great, my wife is happy and that makes me happy. I highly encourage you check out Lake Country, 39+ years of experience. Their website has examples of what they can do, traditional, stamped, etc. A picture is worth a thousand words! Thank you Tom and crew!

Tom and his professional crew performed the garage work flawlessly. He then poured, colored and stamped a 3 car wide driveway using a cobblestone brick pattern hand finished. It is beautiful and I would make a personal recommendation for Tom anytime!

I wish I could review the quality of Lake Country Concrete Specialists, but I never got to that point. I won an auction back in November of 2014 for $1,000 worth of concrete (roughly 100 sq ft ? according to the certificate). I finally chose to redeem the coupon about a month or so ago, and I called LCCS to schedule an appointment. I mentioned the certificate within the first phone call (?which was probably my downfall). An appointment was schedule for 5pm on the following Monday. I received a call at 5:05pm from LCCS the day of the appointment stating that they were behind on a job, and they needed to re-schedule. A new appointment was set for 2 days later (Wednesday) at 4pm. Wednesday came around, 4pm, 4:30pm, 5pm, no call, no show. I called at 5:00pm, left a message, didn?t receive a call back. I called again in a week, still nothing. Finally I called a 3rd time, got a call back within that day. The person I talked to (I believe his name was Tom) pretty much said he didn?t have me on the schedule for that Wednesday. I knew we had an appointment as I wrote it on my schedule immediately after he we got off the phone when he originally re-scheduled. Okay, so by this time, I would normally be done with a company. Since I had a certificate, I was unfortunately stuck. So I scheduled one more appointment for a Wednesday. Now, I had an event to deliver to on that Wednesday, and my wife was working, but I really wanted to get this concrete set up and completed before Winter. So my wife had to leave work early, and was planning to make the delivery herself so I could make this appointment (at 4pm). Well, guess what, I got a voice message at 3:30pm saying that they were delayed in a job, and they wouldn?t be done until 7pm, therefore, the appointment needed to re-scheduled. Okay, first off, if you have a scheduled appointment at 4pm, and you know you won?t be done until 7pm, you?d think you would know before 3:30pm and could give a courtesy call earlier in the day, not 30 minutes before the appointment. Also, in the voice message, it was also stated he would call back at 4pm. You think I got a call? NOPE! This time, I was fed up. I contacted the phone number on the certificate, and as of now, I will be getting back the amount I paid for it. To me, it seemed they did not want to do my job because of my certificate, and I hope they are banned from any further Auctions provided by the website I purchased the certificate from. Bottom line, if you do have a certificate to cash in, don?t mention it until LCCS comes out, and gives you an honest quote. Otherwise, you?ll never get your appointment fulfilled!

Description of Work
Nothing, they kept cancelling my appointments.

Worker was nice and performed the job on a timely basis. Cracks began to show in sply, Contacted owner for repair, he has been not helpful.

When smoothing out the concrete, workers used knee boards that left slight indentions of about a 1 & 1/2 foot diameter. One area is right in front of the main door entrance. After rain, freezing rain or snow, water or ice collects in these areas. It makes it dangerous when stepping out of the house when ice forms there. I called 25 times over 3 years. I kept a log of all calls and if I talked to anyone. Usually no answer and no call back from messages left. Only if I happened to catch the owner on his cell phone would I get to talk with him. Owner would always apologize and say he will take care of it. Owner did come out twice over 3 years and acknowledged the problem. First time he said he would replace it at their cost as their insurance would cover it. I repeatedly tried to have him setup a time for this but kept being told they were too busy or other excuses (weather, out of town). In June 2013, owner came out again. Said he would cut out the area in front of the door and replace that. Promised to do this that summer and he would contact me. Again did not happen even after more phone calls. The other issue is they tore up the front lawn instead of putting down plywood for the concrete removal equipment to be on. They just recommended getting a load of topsoil and reseeding, which I did at my expense.

Description of Work
Replaced front porch concrete slab (6 x 30 ft) that was sloping toward the house. Work was done October of 2010.

Horrible service, poor quality, did not back up their work.

Description of Work
They installed a stamped concrete patio. It looked great but their prep and control joints where insuffucient and excessive cracking occurred (I realize concrete cracks but 7 cracks in our patio is excessive). I called 8 times. The only response I ever received was from one of the owners, who sounded like he was drunk and calling from a bar. They never returned. DO NOT USE THEM - if things go wrong, they do not stand behind their work.

slow to contact about setting up appointments to pour, poured during a monsoon. poor follow up to concerns about qualilty. now two years later concrete is chipping , cracking. front sidewalk is dropping. I have given up trying to get them to come out, waste of time

Description of Work
They put in stamped concrete in my driveway.

I was very happy and it was exactly as quoted. It was very competitive of anyone else that I priced. They did a nice job in a timely fashion. The clean up was a little off, but cement things are. The work was professional.

Description of Work
I used Lake Country Concrete Specialists for a front sidewalk and a back porch and step.

It was nice that they took the job because other companies were not willing to come out to do it. We expected to pay more because of this. They were, however, very pleasant over the phone and did the job nicely.

Description of Work
We needed them to do a small concrete pouring job.

The existing walk was crumbling and the patio slab had settled and cracked. The company president responded quickly to our call requesting an estimate and was very professional from our first conversation forward. He and his crew of two other men got the work done in two days, despite more difficulty with removal of the patio slab than he had anticipated. At the end, they could have cleaned up a little better, but we were very satisfied with the end result - gorgeous, much better than before!

We are equipped to help you with many outdoor projects such as roofing, siding, concrete work, driveways, replace driveways, asphalt seal your driveway, masonry, even remove snow from your rooftop.  …

Kirch Improvements, LLC is a fully licensed and insured, deck builder based out of Brookfield, WI. From conception, to the finishing touches, we are here to help make your outdoor living space dreams a reality. We pride ourselves on building your deck with high quality products and craftsmanship, while providing excellent customer service. We only use materials we trust; and stand behind the decks we build with a workmanship warranty. A deck isn’t something you build every day. It's unique and personal. We will work closely with you to ensure you are choosing the right design and products that suit your outdoor living style. Our goal is to provide you with all the information you need to make an educated decision on a deck that you will enjoy for years to come. Our firm is an Azek Platinum contractor, and has discontinued the use of wood decking. Please Note: Our firm does not do interior work, electrical, plumbing, handyman services, deck staining, deck repairs, siding, roofing, windows or doors.  …

No, Lake Country Concrete Specialists Inc does not offer warranties.