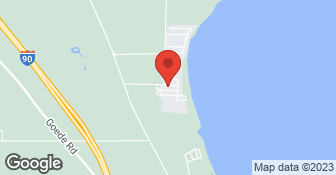 We are an experienced moving company founded in 2006. We do all sorts of moves from just loading client rented trucks, drive & unload trucks. We handle everything from portraits to porcelain to pianos. Small jobs & large jobs. We work quickly & take care of your valuables. A field supervisor is physically present at every move & all communications are responded to as quickly & accurately as possible....

M&R Movers is a very untrustworthy company. I contacted them five days before our upcoming in-town move. I confirmed over the phone with Ryan that this move would be for August 10th, the day of my closing. The night before my move (after all other moving companies had closed for the day), I get an e-mail from M&R Movers saying that they do not recall us ever discussing moving me on August 10th, and that they did not have availability for more than a week. They did not call me or attempt to contact me in any other way, and they simply would not answer their phones or respond to my voicemails when I tried to call them. I looked back in a thread of e-mails I had exchanged with Ryan, and I had specifically mentioned my moving date of August 10th several days prior to his cancellation (this, again, was in addition to the several times that I confirmed that the date was August 10th during my initial contact). I even have a thread of e-mails where we discuss logistical items for the day of the move, including what time the movers should arrive at my apartment. My main question is, since Ryan and I both had an understanding that I would be using their services, what date had they assumed that they were going to help me move? I have tried to contact M&R Movers several times since they canceled on me last-minute, but I still have received no response. Prospective clients of this company should beware of “spotty” communication, and ensure you have everything in writing before considering using this company. Ryan refused to draft up a contract for him and me to sign, and now I know why.

Description of Work
Ryan and his guys are great. Thus far, they have only moved much of our stuff into storage - our move across the country is coming up. But I appreciate Ryan's friendly and helpful attitude, his flexibility. Really like him and would certainly recommend.

I contacted Ryan, they owner by phone. He promptly set up an appointment to go through the old house & quoted me a price. The movers showed up on time, including Ryan. Did a great job.

Description of Work
M & R movers moved us from McFarland to Monona. They were prompt, polite, very professional & fun. Very fast, too. We would recommend them to anyone.

Description of Work
Professional and timely. Entire team was friendly, careful of household items and worked quickly. Would recommend and use again. Love the fact that owner is a VET and can give back.

The team was on time and was very courteous. They handled all our furniture with care. They were efficient, yet careful. And the price was exactly what I expected based on our contract.

Description of Work
Excellent, efficient people. I needed large items (washer, dryer, sofa) moved within my home. They accomplished the task with ease!

Thank you [Member Name Removed]. We appreciate your feedback

Protecting your belongings and providing quality service is our number one goal. Our experienced and courteous team of movers has been trained in the best practices to ensure our customers have a safe and stress-free move. StraightLine Moving is a certified location for Allied Van Lines. Allied Van Lines has the largest mover network in the world combined with over 85 years of experience. Whether you are relocating long distance or locally, our global network ensures that no matter where you're going, Allied can get you home. As a full-service mover, we handle everything from packing, loading, transporting, and unpacking your belongings. Our mission is to provide affordable moving services backed by a name you can trust. We are a company built on a history of service, and it is our pleasure to assist you as you plan and prepare for your next move. Get your instant quote today! Moving comes down to the movers that enter your home! Our Movers Are: - Background Checked - Clean and Uniformed - Polite and Respectful - Must Pass Rigorous Training - Movers have an average of 5 years experience  …

With 8 years experience in the moving industry, we understand the hassle of the job. Busy B's promise to our clients is to complete our moves with compassion and efficiency. We have served Sun Prairie, WI, Madison, WI , Middleton, Wi Milwaukee, WI and surrounding areas. From moving a couple of items to moving whole house loads we have a solution! Even if you are moving out of state. From Busy B's Movers you can expect consistency and integrity. Our trained professionals will pack, wrap, and pad your items to insure a safe move. From your estimate to your unload, you will be stress free.  …

Mr. Mover is a Fully Insured, Bonded and Experienced moving company that Southeastern Wisconsin homes and businesses have relied on since 1995. Contact us anytime at (262) 376-9800 or visit www.mrmover.com to assist with your packing, moving or storage needs!  …

No, M & R Movers LLC does not offer eco-friendly accreditations.

No, M & R Movers LLC does not offer a senior discount.

No, M & R Movers LLC does not offer warranties.