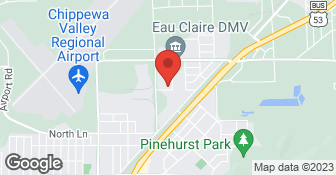 We do it all, from demo to foundation, to kitchens & bathrooms, we do work with some sub's that we have used for over 10 years,in our addition we stick frame, we use sunrise windows, insulated vinyl siding, we take the worry out of constuction

Great experience with these guys! Setting up the initial meeting was easy, and the work was able to be scheduled for just a few days later. Work included removing the interior trim (was able to do it without damaging either the wall or trim), removing a storm door, removing the old aluminum wrap and brickmolding, removing the old door and frame, adding some insulation below the threshold and installing a new piece of wood across the threshold (since nothing was under the old frame), installing my new entry door, installing my new door hardware, and installing new aluminum wrap over the brickmolding. Everything was adequately sealed and insulated, and the installer kept any mess to a minimum. He even had some very useful tips for when I decide to paint the door. There were a couple unexpected things that popped up (as does happen with older homes) but the installer was able to adapt easily and get things done the right way. Though this did cause the work to take longer than expected, they honored the contract we had signed and did not charge anything additional. Both Steve (who I set up the work with) and Casey (who did the work) were very professional and friendly--really enjoyable to work with. I will definitely contact again for some other projects I have on the horizon!

Replacing windows required more work than was anticipated. Provider asked for more money than contracted for to cover his costs. I recognized the problem and agreed to pay an additional amount. The installation was well done. the finish work ie painting around the trim was terrible..Paint was everywhere. THis problem has yet to be addressed.

A rep for the company came over to give me price on the windows I wanted to replace. He looked at the windows, took some measurements and gave me a price. He even agreed to and quot;wrapand quot; the windows (put aluminum wrap around the windows) to sweet-n the deal. I agreed to the deal. The contract stated the job to be done in Dec. 2012. Every time he (rep/worker) scheduled a time to be here, he never showed. Had every excuse in the book as to why he could not be here. I put aside my own personal time to be here every time we agreed on. That did not make me happy to cancel or put aside things and then have him be a no show. Finally on Jan 7th the owner and the rep. showed up. They put in the windows, none of which were installed correctly. I was very angry. I not only waited over a month to have the windows put in, but then to have them installed wrong was the icing on he cake. They left the windows unfinished and told me they would be back to finish them. Guess what? I wasn't able to contact either one of them after that day. My house looked like crap on the outside with the windows in but unfinished (not wrapped) like agreed. Finally after several days of calling, the rep. called me back. He told me that he would be back in a couple of days to and quot;wrapand quot; and finish my windows. He never showed or answered his phone again. I was p*****. I turned them in to the BBB (Better Business Bureau) . Wasn't long before the owner called me and wanted to know what was going on. I told him what his rep. was doing, and how upset I was. The owner followed up by having another crew come out and finish the windows as agreed. The crew did show, they were on time, and did good work finishing the windows. Mind you this is now the middle of and quot;Feband quot;. I came to terms with the owner after it was all said and done. WARNING!!!!! If a guy by the name of ZACH LASHER (the and quot;repand quot;/ worker) shows up at your door and offers you a great deal,,, CLOSE the door and walk away. He lied to me over and over and made false statements. I would NEVER trust him again or deal with him. I cant WARN you enough, STAY away from that guy. As for the company, well, personally after my experience I would not bother with them again. The owner is a nice guy and he did have some one come and finish what his rep/worker didn't do. I'll give him that. The way the whole ordeal was handled from beginning to end - I wasn't overly impressed. I don't feel one should have to go through the and quot;BBBand quot; before a contractor will come and finish a job. I will say that most of the problem was with Zach. LIESand lt;LIESand lt;LIES.. In closing I feel if your paying some one to do a job that they agreed to do,, then darn it, the job better get done. Good luck to those who chose to go with this company, maybe after what I went through they might of stepped up their ethics.. One can only hope.

Description of Work
Contracted to put in new windows.

It was quick and painless for me - and they performed the job outside in the winter after a large snowfall. That was very impressive!

Description of Work
The company removed the old gutter from my garage and replaced it with a new, much more efficient gutter style. They also cleaned off my garage roof in the process, cleaned up after themselves, and hauled away the old materials.

Description of Work
Replaced two exterior doors, added a storm door. Added shutters and a motion light on the garage. Fixed the garage side door.

Very responsive to first call; arrived on time and completed project within one week.

Description of Work
Installed seven windows and alumimum-wrapped all windows and doors on 1930 two story home.

I have been very pleased with the work Midwest Home Improvement has done for me. Steve is very responsive to my requests. He is very creative with his plans and ideas and is very flexible with his schedule so that he can meet with me at a time that is convenient for me. Steve told me right from the very beginning when I requested an estimate for replacing the siding on my house that his company was middle of the road as far as prices go. I have found this to be very true but find the products they use and workmanship to be far above and quot;middle of the roadand quot;. Steve has always been very helpful with finding financing for me to complete these projects and in fact, since the real-estate market has gotten so tight, he was even able to find a source to work with me with the latest project, the addition of a new room/entryway. I also appreciate that Steve takes care of all of the permits and inspections so I do not have to take the time to arrange these things myself. Steve answers any questions I have, and being a single woman with no clue about remodeling, I have plenty. I always have felt Steve has given me honest answers to my many questions. If I have an idea about how a project, Steve is always willing to listen to me and take my suggestions seriously. I have been very impressed with all of the crews who have worked on my home over the years. They have always been very prompt, polite and professional. When they leave for the day, they always clean up the work area and do not leave tools or demo materials lying around. If I have a concern about the work being done, the crews are always great about making sure we are both on the same page and answer my questions before moving on. I have had so many compliments on how my home looks. People are very surprised to see the before and after pictures. The work Midwest Home Improvement has done has added value to my house. I would highly recommed Midwest Home Improvement for any projects you might have.

Description of Work
I have worked with Midwest Home Improvement for approx 10 years. They have replaced the windows, doors, and siding on my house. They have also replaced the carpet in my entire house and most recently built a new room/entryway to my house. I am hoping within the next couple of years to be able to remodel my kitchen and add another deck but I do that, this coming year I will have Midwest Home Improvement replace 30 year old asphalt shingles with a new steel roof.

Been Doin' It Construction LLC

Bruce Andrews Seamless Gutters, LLC was founded by Bruce Andrews in 1999. Bruce started the seamless gutters business on principles of quality, integrity, and the pride of knowing that he provides his customers with the best gutter drainage system available. We offer the best gutter guard system on the market to our customers. His crew of professional seamless gutter installers has helped many homeowners and businesses enjoy hassle-free, maintenance-free, and worry-free seamless gutter and gutter protection systems for St. Paul, MN Minneapolis MN and the surrounding areas, also including Southeastern Minnesota and Western Wisconsin.  …

Frontline Roofing And Exteriors has been in the Industry for 22 years. We specialize in Roofing, Siding, Doors, Windows, Gutters, Insulation and Masonry. Call today for your replacement or repair. https://frontlinerande.com/  …

Midwest Home Improvement is currently rated 4.4 overall out of 5.

No, Midwest Home Improvement does not offer eco-friendly accreditations.