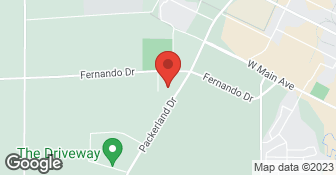 Contractor tracked snow and dirt through house did not clean off shoes was here about 15 min. than ran up stairs and proceeded to use bathroom for 15 min. Than proceeded to spend another 10 min. on home furnace. Showed him the furnace in garage I had to furnish a step ladder he did not have one. Pulled out igniter looked at it reinstalled (I was watching) it was messing around than unit shocked him kept trying to get it to fire pulled out igniter told me it was broken. Was not before. Said he had to order one it would take a week. Found one at grainger supply. Second service man showed up installed igniter furnace would not fire said I neede a ignition board cam back installed board furnace works. Total cost for both jobs 750.00 plus said parts were sold at cost were not. Second service man was very good first a 0. Owner answered email with a excuse. The reason I called was they installed both units when house was built should have known better.

They were very professional and explained everything very well

Description of Work
They replaced my furnace and air conditioner

On call tech was very quick to respond but said he was 2-3 hours away. The business office is 4 mi from me. He also said that bevause it was snowing it would take him a lot longer so I should wait until morning. He said if I called at 7am someone could come over right away. Right after we spoke the boiler stopped giving off heat. I called back at 7am and the office took my name and number but didn't call me back for 30 mins. I called again and they said they were too busy to come this AM. They put me on the schedule for afternoon but could not give a time. It was 5° F outside so I didn't want to risk frozen pipes. I called another company.

Description of Work
Called he back after hours.

It was fantastic. The guys were professional and punctual. As soon as they showed up, my husband was like "let me show you to the basement and help you find everything." The technician said "go sit down and relax, we're here to work!" And boy were they! They were quick and efficient. Whenever somebody does a good job, I like to write a positive review to show my appreciation. We have had so many terrible contractors since building our home, so when somebody does a good job I am elated!

We called on a Saturday morning when our furnace was completely shut down. Todd, the on-call tech, called us back immediately. He explained their weekend pricing in detail, then walked us through a checklist of what we should do to try and fix the problem for the weekend and avoid the surcharge. He spent nearly 30 minutes on the phone with us, and we ended up completely fixing the problem ourselves! We are so impressed with his professionalism and willingness to help us. He could have easily just stopped by, fixed the problem and charged us, but he didn't. We will ONLY use Ideal Air from now on!

Description of Work
The on-call technician returned our call promptly and walked us through troubleshooting techniques to assess and fix the problem.

Our boiler was leaking the other night in the middle of the night. When my husband called the first place with the name on our boiler they never called us. My husband then called Ideal Air and they told him in the middle of the night how to stop the leaking so we would not have to pay higher costs. When Kevin got here the next day he spoke to me with respect and not like a woman who would not understand anything. My husband than came a little bit after and Kevin re-explained everything to him. He told us the problem was not as serious as we though and was very curteous and quick to fix it. He had the part and showed us what was wrong. We would recommend this company to anyone! They will now take care of our AC unit as well moving forward.

I was very satisfied with the service.

Description of Work
They did a complete system check for the winter.

i had my furnace inspected and tuned up by another company in the end of September 2011 and they said it was good enough to last a couple more years (was 19 yrs old) and then after they left my furnace wasn't working so I called them back in a couple weeks later and they came over around 2pm that afternoon and condemned the furnace because of holes in the heat exchanger....They gave me some estimates for a new furnace which seemed pretty high. So I told them I would think it over and would call them back. So I decided to get another quote and called Idealaire and spoke with Art who came right over to my house after he got off the phone with me. Art quoted a much better price for a furnace with more options than the quote from the first company. The installers showed up the next morning at 7:30am and installed everything that day. They even checked my whole house humidifier and replaced the filter on it. They were VERY thorough and took their time getting everything done and inspected and tested before leaving.

though a little pricy , did a pretty good job. checked up the coolant and topped it,

Description of Work
arrived on time. checked the a/c. pulled out the tester to test for the amount of cooling. though a little pricy , did a pretty good job. checked up the coolant and topped it,

We found out A/C wasn't working on a hot and humid day. They were able to put me on the list the morning I called. The technician arrived at 5PM. After an hour of diagnostics, the blower motor was found faulty. I had detailed to him the problem (a/c fan shuts off after a few minutes of being on) and the steps I had already taken; cleaned outside unit, cleaned drain line, and made sure the filter was clean. I thought taking an hour to find the blower was bad was a bit long at $74 an hour. After another half hour, he found he was unable to fix it that night because they didn't have a replacement motor in stock. The motor was covered by warranty. He said he would call the next day when he got the motor from a local warehouse. The next day he spent another hour replacing it and making sure everything was running correctly. He also generously, spent some extra time helping my husband fix a small gap around the filter. On the bill I noticed that he put down one and a half hours and asked why. He said the extra half hour was for travel time to pick up the motor. I understand that is company policy, but seems a bit extravagant to me when he was already in the area where he picked up the motor. Overall, the service was good, prompt considering the same day call and they completed the repair needed.

Description of Work
Diagnostics was ran to find problem. Blower moter was replaced.

At Healthy Home, our first priority is doing a great job for you the customer. Because our business grows upon referrals, so doing a good job will generate referrals. For our customers, we want the best system that fits their needs, not what costs the most. With our combined over 63 years of experience, we see lots of heating and cooling challenges. That’s why at Healthy Home, we are committed to providing the optimum comfort solution at the best possible price. We only recommend systems that we’d have in our own homes, and we only partner with manufacturers that have a proven quality record and comprehensive warranties. All our products carry a minimum warranty of 10 years parts and labor with some carrying a complete furnace replacement. When you request a consultation, we’ll come to your home and take the time to understand your family’s specific needs. Whether you’re upgrading an existing system, putting on an addition to your home or building new, we will discuss your needs to design the best system and approach. Using one of the manufactures that we partnered with, the brand and specific model of equipment is selected to provide maximum comfort and the lowest operating costs. Using a variety of modeling and evaluation tools, we can present a range of options.  …

All statements concerning insurance, licenses, and bonds are informational only, and are self-reported. Since insurance, licenses and bonds can expire and can be cancelled, homeowners should always check such information for themselves.To find more licensing information for your state, visit our Find Licensing Requirements page.
General Information
Free Estimates
Yes
Eco-Friendly Accreditations
No
Payment Options
Financing Available
Emergency Service
Yes
Warranties
Ask for details

No, Ideal Air Heating & Cooling Inc does not offer warranties.

Are there any services Ideal Air Heating & Cooling Inc does not offer?