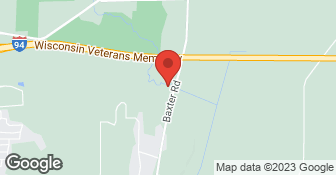 G & K is a family run business specializing in Roofing, Siding and Home Repairs. Started by Glen and Karen approximately 40 years ago. We have an A+ Rating with the BBB. Our emphasis is to make sure you the Homeowner receive excellent service, quality materials installed by skilled professionals. Our estimates are free. Please call....

Harrison Construction has over 40 years experience in the construction industry. All our employees have the experience and skill required for all your building needs. We are a general contractor and do about 90% of the work ourselves.Harrison Construction is a member of the BBB and is fully insured for our customers protection and peace of mind. No payment is due until work is complete. Sorry no Financing.  …

Basswood Roofing LLC is your local Wisconsin based General Contractor specializing in Roofing, Gutters, and Insulation. Established in 2018 in DeKalb IL, we are dedicated to delivering outstanding customer service, exceeding expectations and providing the highest quality workmanship. Our goal is to create long-term value, and peace of mind for our customers by building trusting relationships for years to come. With over 10 years experience, top to bottom there is no job we cant handle! At Basswood Roofing LLC - Our relationship does not end when your project is completed, it begins.  …

We highly recommend G &K for any roofing and remodeling project. We have worked with them on four different projects and have been very satisfied with each one. Glenn came to our home, carefully explained his product, guarantees, and contract. He helped us make suitable choices. As work progressed he met with us to explain what was being done and to gain our input. When work was completed Glenn very carefully inspected the worksite to be sure everything was done to our satisfaction and the site was left clean and safe. We have no hesitation in recommending G & K Roofing and Remodeling for your next project.

My husband and I have had a long-standing working relationship with Glenn and G&K Roofing. We had our first roof put on 20+ years ago by G&K, highly suggested by a neighbor. When a hail storm came through a number of years later, we requested them back for another roof job, along with replacing the siding. Just recently, we requested them back again to install gutter covers and larger drain spouts. We’ve continued to utilize this company throughout the years because we have been very satisfied with the prompt work and thorough cleanup done by G&K Roofing each and every time. Glenn is very communicative and takes the time to answer any questions and explains the job in detail. He inspects every aspect of the job to make sure you, the customer, is satisfied with the work completed.

Description of Work
We needed our roof replaced.

We have used G and K twice. 31 year ago they installed 25 year shingles that they now replaced with 40 year shingles. Both times they exceeded our expectations. Glens 40 years of experience and knowledge of products and procedures is invaluable. Glen gave us our options and Karen sent us a quote. In comparison we felt G and K offered the best price, warranty, and product. The crew did a great job on the roof and the clean up. They worked very hard and completed the job in one say.

I hired G&K Roofing and Remodeling to do a roof replacement on my home. The whole experience was very positive. The quote was in line with others, and G&K was willing to match any others that were offering a similar shingle. In the end I chose the best they offer and the cost was close to what another contractor quoted for the next step down in shingle from the same manufacturer. Both Glenn and Karen were always very helpful and responsive to all questions and concerns (and I had a lot). My job required extra work to be performed (due to previous roof replacement not addressing venting issues) and the crew took care of it to get the job done correct. I am confident I now have a quality roof done correctly, which was my primary goal, and the reason I chose G&K over the others I got quotes from. I would recommend G&K be someone you talk to if you need some work done.

I had called G & K Roofing for an estimate to replace my roof. I was also concerned about an area that appeared to be sagging. He came, said I really don't need my roof replaced other than maybe aesthetically. He refused to give me a bid unless I called 5 of his competitors, all the larger contractors that you hear of in this area. I was to get bids for not only my roof, but siding and windows which I'm not even remotely interested in so he could underdog their bids. When I called him out on his ethics, he completely went crazy. Said I'm a "jerk", "huffy", and left me a threatening voicemail that I saved to this day for anyone who is interested in hearing it. In one breath he says my roof doesn't need replacing, in the next he says that if I write one bad review, he'll call a building inspector and have my house condemned. I'm sure his response to this complaint will put it all on me as well. Do NOT call this business for work on your home. Of all the other contractors I got bids from all the years I've been in my home, I've never been treated so unprofessionally. In fact, some of the contractors said they've heard the same thing about G & K from other customers.

It was a pleasure working with G and K Roofing. G and K's owner provided detailed explanations before the work and carefully monitored the work progression. The crew was very conscientious and friendly. Replacing a roof is not something one does very often and can be daunting but the G and K's owner was supportive and made the process go smoothly, addressing any hiccups or concerns as the work progressed. The scheduling was perfect for my needs and all work was completed on time. The new roof looks great!

We needed to replace of our shingle roof and sought bids from a number of area companies. We selected G & K because of the wealth of experience they have in the roofing business and because it became evident that they have an attention to detail that would assure that the project was done right. Glenn talked us through each step of the process. He was upfront with us that we may need to have some additional repairs to the wood underneath the shingles. We did have a number of panels that he recommended replacement. We talked through the board replacement and went ahead with the work. G&K’s crew worked tirelessly to complete the project and cleaned up the work site with meticulous care. G&K’s knowledge, attention to detail, and dedication to a job done right came through on the project. We are confident that we now have a roof that looks great and will last for years.

After getting several quotes for my roof I chose G and K because I could tell that they had a massive amount of experience and they really cared about the job being done right. Glen explained to me how much care he takes when choosing his crews and it showed with the work they did. Glen brought me up on the roof to show me some of the issues that needed to be addressed. His crew fixed all the issues and they even moved my insulation around to make sure the roof was venting properly. After the job was done Glen came out to inspect the work and even walked around my property to make sure they did a proper clean up (which they did). The roof now looks outstanding and I have complete confidence the job was done right.

Went to business at 8:30 and not a sole was to be found, called number and got some body that I had to leave message with. Not a happy camper