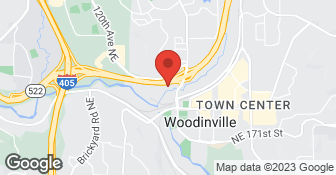 We specialize in all areas of floor covering for both residential and commercial customers. We have been in business for over 50 years. We have financing options available. We have a large warehouse with stock flooring materials. We offer complete service and sales of floor coverings. We provide estimates for free. We have a lifetime installation warranty and we will beat any competitors written quote by 5% on the same or equal products....

Great. We went through the Costco program and that is how we found Haight Carpet. We had several companies provide bids for us and theirs was very competitive. We also loved working with their sales person Mark. he was so helpful and guided us through the process and acknowledging our needs to give us the best product that would work for our family and lifestyle. The installer Alexi was fast and really good at what he does. Would highly recommend them over and over. They are now installing the backsplash in our kitchen next week. They are great and easy to work with.

Description of Work
Install Luxury Vinyl Plank throughout the top floor, with carpet on the stairs and baseboards

Luis and his coworker Kiko were outstanding. Worked the whole day without taking a break, although I encouraged them to take breaks and lunch. They were very helpful and moved some things out of the way. The job was perfect. Very professional, friendly and I would highly recommend this team.

Michael was simply the best. Great price. Fantastic service. They even got our carpet installed in the middle of Snowopolis!!!

We loved our experience with Haight. Our sales contact, Mark VanderGeissen, was honest, knowledgeable, professional and personable. He managed the process from the in-home consultation all the way through install completion and our floors look terrific. We highly recommend Mark and Haight.

Description of Work
New flooring throughout entire home. Hardwoods on the first floor and wall-to-wall carpet on second floor and stairs.

We used Haight carpet to install flooring for us through the Costco flooring program. Mark was very friendly and came out to the house to talk options, work through samples and pick colors. He was also patient while we arranged a number of other jobs as we got our house ready for sale. When it came to execution, however, they slipped a bit. We had been told that we could have our carpet installed over the weekend and given a date - but when we called to confirm no one knew what was going on or why we weren't on the schedule. The install eventually was rescheduled for the following week which caused me some work schedule issues. Also, likely because of the holiday the day before, the installer was a couple of hours late for our appointment window and no one at the company could initially tell us what was going on. I found Mark on his cell and we tracked down the installer, who did show up shortly afterward. The installer was friendly, and very good at his job - the carpet looks and feels great. In general, a good job but rough schedule management.

Everything from the sales process through the installation was done in a professional and friendly manner. Smooth, smooth, smooth.

Description of Work
Replaced most wall-to-wall carpet in our house.

It was awesome. They made it a one piece rather than gluing it together and leaving a seam. They guy that came out to give the estimate. He was awesome. He gave us a couple of options. He did not pressure us into getting something that we did not need.

Description of Work
They tore out the old floor and put in new vinyl flooring in 2 bathrooms.

Excellent! The staff is wonderful and helpful. We purchased floor and shower tile. We installed the floor tile ourselves and hired a company to install the tile since we were running out of time. Long story short we fired the tile guy, it was clear he was hired from an HD parking lot and wound up purchasing more tile to fix the issues. Our associate at Haight was very understanding and we have more tile the next day. She is amazing. The carpet was in in a matter of a few hours and looks perfect with zero marks on the walls.. way to go guys!! Haight gets our business for kitchen remodel coming up! :)

New Floors USA is a Family flooring company with more than four decades of construction experience. Our idea is simple: we believe it should be easy, stylish, and cost-effective to find affordable, quality flooring that comes with excellent service. Every day, we do our best to bring that experience to our customers. Unlike other carpet and flooring companies, New Floors USA comes to you. During a free appointment, we’ll bring flooring options to you. We also take care of installation, answer your questions, offer a vast selection and keep your costs low. Quite simply, we do everything we can to make it easier for you to buy great floors at fantastic prices.  …

**5-TIME SUPER SERVICE AWARD WINNER**Maranatha Hardwood Floors is a well-established flooring contractor in Shoreline WA. Founded back in 1997, our flooring company has gained years of experience and has never failed to provide a true and reliable hardwood floor service. With an arsenal of tools and one of the most reliable companies in the region, we are ready to tackle any project, from hardwood installation to refinishing using Swedish or Waterborne finishes; always providing complete satisfaction.  …

We stand out by professionalism obtained with each job that I performed in the last decade. My customers are very satisfied with the finish product that results from my attention to details and passion that I have for woodwork. After I complete the job, more satisfaction arises by leaving the house dust free, using dustless machines/equipment.  …

Haight Carpet & Interiors is currently rated 4.8 overall out of 5.

No, Haight Carpet & Interiors does not offer eco-friendly accreditations.

No, Haight Carpet & Interiors does not offer a senior discount.

No, Haight Carpet & Interiors does not offer warranties.

Are there any services Haight Carpet & Interiors does not offer?