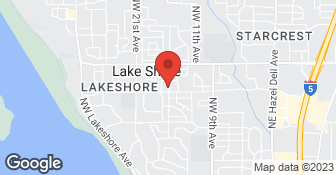 We stand out by giving our customers outstanding service and by treating our customer like family, and plan on having lifelong relationship with them. While each job is unique, we give our customers a bid to do the work. No hourly rate, so you dont have to watch the clock wondering how much the job will cost in the end. We stand by our word and our service. Our mission is to provide quality plumbing services with up-front pricing to both commercial and residential customers. We currently are serving the Clark County area with 12 plus years of experience. Veteran owned and family operated.We are lic., bonded and insured. Our customers appreciate the friendly prompt family service that we provide. We work on many different projects; anything from clog drains, to toilet repair. We can do it all. If you are having a issue with water mains, waters or needing a re-pipe. We can do that too. We have been told they like our Upfront pricing, Friendly staff and our communication. About the owner, I have been plumbing since 2003 and I have been in the Clark County community since 2009. I learned my trade in the United States Air Force from Dec 2002 - Dec 2006. When I got out, I went to Seattle, Washington and worked as a civilian plumber for a few companies, during this time I refined my skills towards service repair and remodel plumbing work. I currently service the Clark County area with 12 plus years of experience. Veteran owned and family operated. I am well experienced in both Residential and Commercial plumbing. If you have an emergency I can handle it....

I am writing this due to an extreme lack of service I haven’t ever experienced before. I started with my contact via a request though the company’s website. The response was “we will get back to you as soon as we can to schedule an appointment”. After almost 10 days I called the company. The man who answered sounded unconcerned I has submitted this request and not heard back. He just said do you want to schedule a call by one of their plumbers and I said yes. They did not have a day available for almost another 2 weeks, but I set that day for the call. As is typical they give you a range to be at home for the plumber (12-4PM). A week prior to that day I called to relate I wanted to add a garbage disposal repair to the toilet repair request that was my original request. I asked if it would help their process for me to get them part numbers or product names, and the man related “no, they are ready to repair anything”. On the day of my appointment I waited until 3PM, and as I had not seen nor heard from anyone I called the company. The man who answered didn’t seem concerned I hadn’t heard, but said they were “having some difficulties”. He went on to say regardless there would be someone coming, they were just running late. A few minutes before 5PM I called again and got a voice mail stating they were either on the phone or it was after 5PM. I left a message saying I had been waiting since noon and needed to plan if there was indeed someone still going to come by. I never received a call back. I waited to be sure until 7PM. The next day I also never received a call all day, or the next, or the next. This is the most ignored I have been by a service company in my life, and in multiple ways. I have now wasted almost a month trying to get this company to simply fix a toilet and replace a simple garbage disposal. While thankfully I have a second toilet this is again the worst I have ever been treated by a service company. I now have had to start over and try to get another company scheduled in. Rowe Plumbing should be avoided, period. There are obviously issues going on in the company.

Very very well. I really like them. The fact that they get it done quickly and cleanly. Josh is very good, very friendly. He's honest and very reliable. I have recommended him to my neighbors.

Rowe Plumbing did an excellent job replacing our old rusty sinks with new ones. They also installed new sink faucets and tub/shower fixtures. Their work was excellent and the prices were competitive. We will definitely use them for future plumbing projects.

On time, efficient, great quality work. Even suggested installing the shut of and waist height, easier to get to if needed. Have already referred to friends and clients, 2 have used, very happy,

Our new home, which we bought in April 2016, needed a faucet fixed. It had more than a leak; it had a steady stream of water coming from it. (We tried to fix it ourselves, and Delta sent us a new part twice. It was the wrong one, but it was exactly like the one we thought needed to be replaced. it fit perfectly and we didn’t know any differently. Our stream continued.) We finally accepted that this was a job for a professional. I chose Rowe Plumbing and Drain because of all the recommendations on a couple of Battle Ground Facebook pages. Those recommendations were spot on! Tim was on time, professional, thorough, and very kind. He even made our dog feel at ease; she’s a very good judge of character!) When he was first looking at the faucet, he explained some of the possible reasons for the problem. One of them was that the water pressure could be too high. The week before he came we had ordered a water pressure tester, and the result was 100 psi. (I think that’s the term for pressure.) Then we had the city come and verify our results, and they did. Our amazing son-in-love traveled through the crawl space following water lines, trying to find the pressure regulator. He couldn’t find one. Initially, we had decided to not say anything about this, because we didn’t want it to influence Tim’s findings. I only shared after he brought up this possibility. After confirming the high water pressure, Tim dug up some of the area around our water meter and didn’t find a regulator there. He was hoping, as we were, that all we needed was an adjustment to our required-by-city-code water pressure regulator. Then he went under the house and searched for it. It hadn’t been installed, so Tim broke the news that he would have to install one. He was very upfront, as he had been thus far, telling me what the cost would be. I approved the work and signed a consent form. When the new pressure regulator was in place, our pressure was no longer crazy high. Then he checked to see if this had fixed the faucet problem. It hadn’t, so he got another one of the same part that had already been replaced. He discovered the part in our faucet was the wrong one. He installed the correct one, and it still leaked. So Tim and his apprentice looked at other parts of the plumbing. He found the problem that was probably caused by the high pressure combined with hard water. Tim even took a picture of it to show me, and there was a hole along one of what I assumed was a valve that controlled the flow of either hot or cold water into the shower. This was another expensive fix because, since there was no access panel, the drywall on the other side of the wall had to be cut in to. Thank goodness the wall was in the laundry room! I will not forget how Tim explained things…”I’m a great plumber, but a terrible drywaller.” I appreciated his candor. Once this work was completed, the faucet didn’t have a leak and the water was at the right pressure. Job well done! Throughout this process, Tim answered a multitude of questions about hard water and the housing boom and various other subjects. He was very patient and never once acted like we were a bother. I was so impressed with how well Tim and his apprentice worked together. As a former teacher, I recognized another good teacher. He asked his apprentice questions, allowed him to do things, and was always respectful to him. I would recommend Tim to anyone. He is an honest professional who knows his stuff. He cares about people and our community.

They are really great workers.

Description of Work
They repaired some problems we were having in our bathroom.

It was excellent. He was wonderful. My little project ended up being bigger, which isn't uncommon. He was here almost immediately and it took a day. He brought the hot water heater, set it up and took the old one away. He was professional, did a good job, no problems, what he said he was going to do he did, and when he had to go into the wall in the house it was neat and tidy just like he said it would be. He was very good.

Description of Work
He redid the faucet in the front and back. He ended up putting in new hot water heater.

Tim arrived within 30 minutes of my phone call. This was a Saturday morning. He unclogged the drain in about 30 minutes, was pleasant and efficient.

Description of Work
Unplugged our drain from the kitchen sink.

I left a message and Tim called back very shortly. He came out fairly quickly, especially for a Sunday. He was very pleasant and knowledgeable and did a great job. We will definitely use them again.

Description of Work
He cleaned out the mainline to the street.

As an engineering contractor and homeowner finding a reliable efficient plumber is challenging in best of times, let alone when you have a leak. I called and they were able to get to us and arrived promptly. Tim Rowe is the owner and could not have been more professional in his approach to the problem and repair. Before we knew it he was done! I highly recommend Tim to anyone that needs a good plumber and I also intend to use him with our up coming bathroom ( 2 ) remodel.

We as a company specialize in providing service, maintenance, remodel, and new construction plumbing for residential, commercial, and industrial clients. With a total of 30 years experience we are here to provide you with unbeatable customer service and top quality installation.  …

Penney Excavating LLC is committed to excellence in every aspect of our business. We uphold a standard of integrity bound by fairness, honesty, and personal responsibility. Our distinction is the quality of service we bring to our customers. Accurate knowledge of our trade combined with ability is what makes us true professionals. Above all, we are watchful of our customers' interests and make their concerns the basis of our business.  …

How is Rowe Plumbing and Drain L.L.C overall rated?

Rowe Plumbing and Drain L.L.C is currently rated 4.9 overall out of 5.

What days are Rowe Plumbing and Drain L.L.C open?

What payment options does Rowe Plumbing and Drain L.L.C provide

No, Rowe Plumbing and Drain L.L.C does not offer free project estimates.

No, Rowe Plumbing and Drain L.L.C does not offer eco-friendly accreditations.

Does Rowe Plumbing and Drain L.L.C offer a senior discount?

No, Rowe Plumbing and Drain L.L.C does not offer a senior discount.

Are warranties offered by Rowe Plumbing and Drain L.L.C?

No, Rowe Plumbing and Drain L.L.C does not offer warranties.

What services does Rowe Plumbing and Drain L.L.C offer?

Are there any services Rowe Plumbing and Drain L.L.C does not offer?