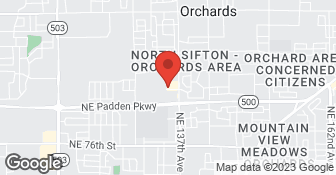 Clean and Green has a long reputation of removing years of abuse from your home by our extensive and detailed cleaning techniques. We are not your average "Spray and Wipe Company". Most initial cleanings include scrubbing floors the "old fashioned way" on our hands and knees and using a "little elbow grease"! Our cleaning business is our passion...not just a company. We are Licensed, Bonded, and Insured, and Family owned and operated. We do not utilize sub-contractors, all of our employees are employed by our company and have workers compensation insurance. We treat every customer as an "opportunity" and not a dollar sign, and it's always reflected in our prices. We are licensed in both Washington state and Portland Oregon. All Angie's List members receive %15 off all services....

Hello my name is Alex Malamura and I am your guy for power washing. I can power wash anything concrete such as driveways, sidewalks, patios, and a lot more. I have been in this side business for over 4 years and have the proper equipment to get the job done. I give the option to wash with a wand where all other companies only use surface washers. Let me know if you are interested. Be blessed.  …

Over 17,000 Home Owners Have Benefited From The BenchMark Healthy Home Cleaning System We Provide Proven Cleaning Services To FREE You From Housework Servitude…GUARANTEED. HOME OWNERS WHO FEEL FATIGUED, UNDERAPPRECIATED, DISRESPECTED AND MISUNDERSTOOD If you find your self the role of motivator, but rarely on the receiving end from those around you - and the anti-effort, anti-engaged rhetoric you encounter in the day to day wears you down-you’ll welcome a kind word from someone who really understands your daily experience and appreciates your contributions. What you’ll discover is that our team of experts and top members are the champions of the discreet person who faithfully keeps their home functioning, even as others barely notice it. If you find yourself having to “talk yourself out of a tree” fairly frequently, we get it! We know the conversations that you must have only with yourself. Now, probably for the first time in you home-ownership experience, you’ll step into place where there can be an open discussion, exchange of truth-based ideas and experiences, and energizing encouraging “virtual-visit” twice a month to discuss, gather and plan ideas for maintaining your home. Location phone contacts: Ph 1-Portland; (503) 635-2243 Vancouver; (360)696-4140 Lake Oswego/Tigard/Beaverton; (503) 653-5083 Milwaukie/West Linn/Clackamas County/Oregon City; (503) 262-8030 NE Portland/Gresham; (360) 687-2271 Battle Ground/Ridgefield/North County; (360) 253-7955 Camas/Washougal/Fisher's Landing. Award winning.  …

After almost a year working with Clean and Green, our business relationship has been terminated under unfavorable circumstances. The cleaners who came to our home were consistently pleasant and polite, however seldom punctual (anything less than 30 minutes late was a surprise). We remained Clean and Green clients for as long as we did because the cleaners usually did a satisfactory job, and we liked having the same team come to our home each time. We completed a total remodel of our master bath in early fall of 2015. The very first time cleaners came to work after the new bathroom was finished, one of them scratched our new custom shower glass. When I brought it to his attention, he immediately admitted that it was his fault, and promised to fix it. It must be mentioned that this was not just one scratch, but significant damage over two large panels, so bad that it was recommended that we replace the glass. After repeated calls to Clean and Green?s office to speak with Mickey and Steven, I was assured and reassured that the matter would be taken care of quickly and professionally. At their request, I called a glass company I had previously worked with to get a bid for repair or replacement. It took six weeks for Clean and Green to attempt to provide a competing bid; that gentleman declined the job because removal of such scratching was not his specialty. After that, Clean and Green never came forward with another suggested plan of action. Continued calls and emails to Clean and Green attempting to continue a dialogue were met with (still more) promises to handle the matter professionally and ?make it right.? By this time, two months had passed, so I imposed a decision deadline so that they might expedite their search for another bid. They took no notice, and I have not received one returned phone call since. After that deadline passed, I scheduled and completed repairs as I told them I would. I left unanswered messages detailing the plans long before the work was accomplished. Repeated attempts to contact Clean and Green regarding their financial responsibility for repair via phone and US Mail have been ignored. I am overwhelmingly disappointed that a company I trusted to come into my home has turned out to be so unethical and unprofessional. Let it resonate with you: Unethical. Unprofessional. Untrustworthy. If you are looking for a cleaning service, take your business elsewhere.

I don't remember. It was a long time ago.

Description of Work
I have no idea if I ever used this service. Angies list requests for me to review them in an annoying pop-up every time I log on. I'm hoping this will make the pop-up go away. I tried contacting angies list and they said they'd have it removed. That was a year ago. Sorry company.

They were very good. They came in to do some cleaning for me and I was very pleased with them. There were 2 people who were here for 3 or 4 hours. I have had knee problem and there are things that I can't reach or do, and they were good. They seemed to be efficient, and there were 2 young women. They came and sort of divided the house up, and they were very thorough, personal and friendly. They brought all their own material. They were right on time.

Description of Work
They cleaned my home.

This was the second time the provider came to the house. We just had a baby and needed some extra help to clean the house. We hired them because they said they used only environmentally friendly cleaning products, not the items you get in the store. Well strike one, I checked the cleaning supplies the employees brought: Spic and Span, Ajax, bleach, etc. The house smelled like chemicals after they finished. During email conversations with the owner we were provided a list of cleaning duties the provider would complete. Strike two, the employees who did the work, did not complete the items on the list and when I showed it to them they acted like they had never seen it before. I explained to them that this was the worked hired for but they argued with me again and again. When we tried to call the boss no one answered. The best way to describe the cleaning completed is "hotel clean" where only the surfaces are cleaned, and not that well. Floors that were mopped still had sticky areas and visable dirt. Oven door was never wiped off, rugs were not moved when vacuuming. The employees didnt really use common sense or ask for clarification if they needed a cleaning item (mop, toilet brush, etc). I've listed only a few examples here of the cleaning items over looked. I would not hire them again as they falsely advertised cleaning methods and products used.

They do excellent work. The tendency is that over time, when you have a cleaner they will degrade as far as the quality of cleaning. This company is very consistent and leave the house so immaculate. I have recommended them to other people. They have the same results.

Description of Work
I use Clean and Green Vancouver for housecleaning services. They came 2 weeks ago.

Thank you [removed member name] for taking the time out and providing us the unexpected feedback. Very grateful.I will make sure the gals do an EXTRA good job on our next visit. :)
5.0

We purchased this as a gift for an elderly bachelor. Kudos to the cleaners for taking on this daunting task. It turned out great.

Description of Work
Did a super clean on a grimy apartment!

The person who cleaned our home was great. I think her name is Amber. She was friendly, detailed and fast. My only complaint; I thought I was buying 4 hours of cleaning (2 people for 2 hours), which is how much time I allotted in my schedule. But Amber arrived alone, so 1 person for 4 hours. Thankfully, I was able to rearrange my schedule.

Description of Work
Cleaned our home

The cleaning was really thorough. The bathrooms were sparkling and there wasn't even bleach used.

They are very good, we use them on a monthly basis. It's the same people that come out for me.

Description of Work
Clean and Green Vancouver cleaned my house. They vacuumed, mopped, and dusted.