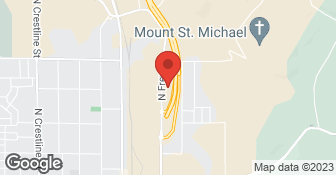 Cda tree and utility llc Free estimates Fast response Lic. Bonded and insured 20+ years experience All the equipment to do any job safely ZERO claims against my ins. We guarantee your satisfaction and we won’t leave until the job is done right. We pride ourselves on the quality work we provide, while delivering great customer service! Check out our services offered and call or click to schedule a free estimate today.  …

They did a lot of work for us. It was expensive. I was pretty pleased with them. They were good with regards to their punctuality. With what they did on their last job, they didn't do as good a job as they were originally.

We have been using Spokane Pro Care since 2013 and had been very pleased with their work initially. Their price was very competitive, especially considering the fact we live a bit out of town which involved some extra travel for them. However, this year their attention to detail has suffered greatly. There was much damage done by whoever used the weed whacker to some of our trees and the pad that holds our heat exchanger. One leg of the heat exchanger has been nearly cut off. In addition to the weed whacker, some areas of grass along our hills edges have been buzzed and cut too close as well as a buzzed ring around another large tree in the center of our driveway island. And finally, we have had to replace the same sprinkler head three times, not because it sticks up too high and the mower blades are hitting it, but because they are running over it with the tires of the heavy mower. I had to put a little flag out there to keep them from hitting it. Simply moving over 2 inches would have avoided this problem. We had one of their reps stop by so we could show him the damage and he said he'd address the problems with his workers. The following week even more damage was done so we finally had to cancel their services. I emailed and sent photos of the damage to Spokane Pro Care and did not hear back from them with any desire to correct, replace or apologize for anything. It was very disappointing.

A team of 6 burly pleasant young men worked for about 5 hours, then invited me to tour the property with them to determine the quality of their work. This is a huge job and they worked steadily and efficiently, having to make more than a couple of runs with debris to the dump. Having two trucks and trailers, they could keep working while others hauled away. On another time the mowing men were here, my older neighbor asked if they would haul away some wood for him. They did so for the modest payment of $20, but so impressed my neighbor he called the company to expressly thank them. I can't say enough about this company!

Description of Work
I use Spokane ProCare for lawn care weekly, sprinkler and water feature start and blowout, and a huge spring and fall cleanup on my nearly 3/4 acre property and have used them for nearly 5 years now. This was spring cleanup, preceded by an estimate by a week. This included raking and blowing up and hauling leaves, pine needles and winter debris, and an initial mow.

All of the contacts that we had with them, including meeting for estimates and having the work done were punctual. All of the employees were polite, professional, and very considerate. Their work was efficient and they did a good job. Many of the neighbors in the area commented on their consideration while working. I did call them back to do additional work, which they did promptly. It was more a matter of communication then lack of work ethic. As I was not on site when the work was being done or completed. I would not hesitate to have them do more work for me in the future.

Description of Work
Pruned and cleaned overgrowth of shrubs, removed some evergreens, and cleaned around house and garage to have buildings painted.

[removed member name], Thank you very much for your review! We look forward to serving and exceeding your expectations in the future. We have great employees and it is always nice to hear that their hard work is appreciated. Thank you for your business. Have a wonderful day.
2.0

After the first cleaning of the flower beds and the removal of the trash, the beds were treated to kill the weeds. After a week when the beds looked about the same I called the company and told them that whatever they had done for weed removal was not working. I then had a visit from Jim, Bryan and Kevin (?) and we took a tour of the lawn and I showed them what i was talking about. We agreed that they would re-spray (at no charge) and then the dead weeds would be removed. The weeds died and then the lawn team used a weed whacker to just trim down the dead weeds to the ground (not pulling them) and hauled away the waste. It wasn't exactly what I was expecting but the beds looked better so I was willing to let it go. The lawn team (the mowing guys) did a great job - the lawn was mowed nicely and they trimmed and kept it looking good. Then I received a bill in the mail for over 900 dollars. it seems all the things I said I did not want were done anyway and when questioned about it they said it was all spelled out on the proposal. I checked the proposal and one of the services I declined they had listed at $35 but it was supposed to be $350 - a typo on their part that they wanted me to pay. After speaking with one of their head honcho's we came to an agreement and then I fired them. I have no problem with misunderstandings but having to explain what I want every time I talk to them is not acceptable. I would not recommend this company to anyone, they are in it for the money and nothing else. The worst customer service I have ever had to deal with.

Description of Work
original estimate was given - I chose to have my flower beds de-weeded, weed removal and a weekly mow for the front and back lawn.

We are truly sorry about your experience with our company, we assure you that this is not typical of the values on which we run our business. We have traced the issue back to a communication error in our paperwork and we have taken measures to correct this issue so that it does not happen again. Thank you for the compliment regarding our “mowing guys,” they work hard every day and they appreciate recognition for their work. Being that it was an error on our part, we have sent you a refund check for the balance of the yard-cleanup services we performed. We have built this family business to serve our customers and neighbors in an ethical manner and at a fair price. We hope that this refund check and our apology will resolve this issue, and we would appreciate another chance in the future to provide you with the proper Spokane ProCare service experience that has been satisfying our customers for over 25 years.
5.0

Bill from Spokane ProCare was very professional, was a super nice guy, polite, showed up when he was supposed to, and was easy to work with. He got me the bid and did his research. He addressed our list but didn't have much experience with the ponds so he came back with a much higher number but I'm sure Spokane ProCare would have done an excellent job.

Description of Work
I'm the president of the home owner association. Spokane ProCare gave us a bid to clean our storm water ponds, mow, do brush cutting, do weed control along a couple of streets, do vegetation kill on some empty lots we have not yet developed, do sprinkler maintenance, and to maintain the trees and shrubs in a playground area.

Thank You (member name removed), we sincerely appreciate the chance to earn your business! Have a wonderful summer. Please let us know if there is anything else we can do to help.
5.0

They fit me into their schedule. The price and service was great. I will use them again. Excellent company and employees.

Description of Work
I had a wasp nest in my wood pile and I needed it out.

The contractor came out at the appointed time and was polite and helpful in setting up an account that meets our needs. His workers show up, and when I had a question about billing while we were on vacation the office manager was great about holding the bill until we returned. The property looked fantastic when we got home. We'll probably sign on for snow removal this winter.

Description of Work
Workers mow and edge our front and back lawns, and let us know if our irrigation system is missing spots or of there is evidence of disease on the trees/shrubs.

I've been using them for almost 20 years. They were recommended to me by a woman who has a master's degree for carpenter ants. They don't over spray which is really nice. They call before they come over and give me a discount because I pay them early.

Description of Work
They come once a year to spray outside.

They offer a lot of services. They previously put in a front lawn for us. They come out on a schedule and spray fertilizer. They also spray for bugs and moths. They have been very responsive.

Description of Work
They sprayed our front lawn.